After finding his fortune, Graham entrepreneur decides he can go home

John “JC” Cahill, the head of B & R Auto Wrecking in Graham and Spanaway, is going home.

JC, who has increased sales 300% in his three years at B & R and was awarded “Boss of the Year” by Locator Magazine in 2010, learned the auto parts recycling business from his father, John, but they have been estranged since JC was a young man.  Now at 35, JC is returning to his ancestral roots of New England and seeking to build a new relationship with his old man.

“He was never an easy guy to be around,” said JC.  “I could talk to him about cars, but nothing else.”

JC describes his father as a grumpy man, always voicing negative opinions and operating his auto salvage business in an edgy, my-way-or-the-highway manner.

“He hasn’t changed much, but I have,” declared JC.  “It’s all about attitudes.  Now, I’m okay with letting people be who they are, and not trying to make them into how I want them to be.”

JC, who is married, said that he has had some transformative realizations during his stay in Graham.  First, he realized that his family had become increasingly important to him and that if he didn’t make an effort to re-establish a connection with his family in  Vermont he might lose them.  That created a strong desire to reach out to his father.

Coached by a colleague at B & R, JC came to understand that many of his core values, such as his belief in hard work, or the importance of not giving up – of “pushing on” – are fundamental attitudes that he received from his father.

“So, I went back to Vermont, and I just grabbed his hand and told him, ‘I’m the man I am because of you,’” said JC.

The words had their intended impact.

“I was able to break through his armor, and we connected like we never had before,” JC said.

With that transformation, JC decided to move Back East, and together with another family member they are developing an auto wrecking yard in Winchendon, Massachusetts, about 75 miles from his father’s home in southern Vermont.

In addition, JC will coordinate parts exchanges with his father.

“My father will be part of my exchange network,” said JC.  “That’s what you really need in this business – a network – a way of getting parts to your customers when you don’t have in your own yard.”

When asked if his father was going to be a partner in his new salvage business, JC chuckled.  “Oh, no.  Really, no.  I don’t really expect my father to be all that different, but I do expect him to be decent to me.”

JC also said that since deciding to go back home, his father has called him about three or four times.

“He hasn’t done that in years,” JC said with a warm smile.

As JC described his plans and the restoration of his relationship with his father, he sounded like a motivational speaker.

“It’s all about choices,” he announced.  “Do you choose to be a victim to your circumstances?  No, I’m choosing to have a better relationship with my father.”

Later in the conversation, JC acknowledged that he would like to become a motivational speaker.

“I’m already doing a little of that,” JC said, adding that he has spoken at several auto salvage trade shows and professional conferences describing the radical changes he has generated at B & R.

“I gave a talk in New York, not that far from my father and I even sent him tickets, but he didn’t show up!”  JC exclaimed, clearly dissatisfied still with some of his father’s choices.

As for the changes at B & R, they are remarkable.  Without any expansion of staff, JC has tripled revenues, all done during the height of the Great Recession.

To accomplish that, JC transformed the culture at B & R to one that was wholly focused on relationships – first to the customer and then to each other.

JC instituted a “no-hassle” return policy on every part sold.  In addition, he issued a 90-day warranty on all parts, including transmissions and engines, and also developed a repair shop in Spanaway so that people with a bum part could get the vehicle fixed with a minimum of inconvenience.

“It’s all about getting the customer back on the road,” said JC.  “That’s what people want.  They need their cars to get to work, and if you can help them do that they’ll give you their business.”

B & R clearly has their business, as the line of customers at the parts desk is sometimes stacked three people deep.

In addition, Spanish is constantly heard at B & R, as customer reps are bi-lingual and many local mechanics buying parts prefer to conduct business in their native tongue.

“We have a lot of Russian-speaking customers, too, and we have two staff members who speak Russian, as well,” said JC.  “There is a very large Russian and Eastern European community up in the Auburn area, where I think we’ve received a lot of word-of-mouth support.”

“We’re seeing a lot of guys who haven’t gone to a used parts store in the past.  For instance, when one of these guys needs something like a side-view mirror, they’re coming to us instead of going to the dealer,” JC said.

Internally, JC has wrought significant changes.  The car lot is no longer a typical looking junk yard, but is clean and organized, with junked vehicles off the ground and sitting on wheel hubs.  The parts supply house is well-lit and tidy, and the resulting efficiencies are showing up in the bottom line. 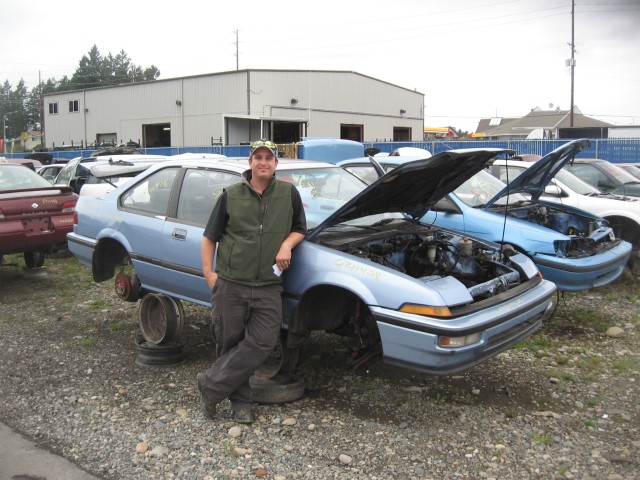 In addition, several new buildings have been constructed or renovated, including a “dismantling shop” that houses state-of-the art equipment to drain every drop of fluid from each vehicle before it is placed in the yard.  That protects the environment by preventing contaminants from pouring into the ground, and also, workers and customers do not have to worry about oils or hydraulic fluids staining their clothes or ruining the parts.

The attention to these elevated environmental practices is such that even the batteries and coolants are removed – even the mercury switches are removed from each car.

This kind of core value extends to relationships with co-workers as well.

JC instituted a rewards system where he hands out three tokens each day for exceptional work to three of his 55 employees.

“It could be for how they spoke to a customer, or how they took out a difficult part from a car, it doesn’t matter,” said JC.

The tokens can be accumulated for prizes, such as an elegant dinner for two, or a family night of pizza and a movie, but JC says that the recognition these tokens represents is so appreciated that some employees save them, gluing them to their tool boxes or personal locker as treasured talismans.

“It’s all about doing the right thing,” said JC, “no matter who you are or what your title is.”

B & R, with operations in Graham and Spanaway and nine other locations in Washington and Oregon is the largest auto recycler in the Pacific Northwest, and JC’s contributions have helped make it so.

But his last day was June 24, so B&R will have a new destiny to create.

“I feel good about leaving”, said JC.  “I’m stepping out on a high note, and my departure allows three of my friends to move up in the company.  My assistant, Kurt, will take over here in Graham, and two others move up in corporate.”

Closer to home, Amanda from accounting perhaps spoke for everyone at B&R in Graham when she said, “I’ll miss JC.  He was a good guy.”

Mention this ad and get a $10 discount

This entry was posted in Business, Culture, Graham News. Bookmark the permalink.