Despite five weeks of rain and fog and the deepening cold of winter, the Occupy Tacoma encampment in a small downtown park on Pacific Avenue has expanded to now include at least thirty tents and up to fifty regular overnight protestors.

“I’ll be here until I see some change,” said Ryan Way, a confident and outspoken protestor who appeared to be in his twenties.

Dylan Levison, at the Occupy Tacoma encampment on Pacific Avenue.

A visit to their occupation on Saturday, November 19, showed about twenty protestors mainly cleaning up camp, washing dishes and tidying up their tentage.  A handful manned their signs and waved at passerbys on Pacific Avenue.  Most campers said they were unemployed and at least one gentleman said he was homeless.  Nevertheless, all said they had long-standing ties to the Tacoma area.

However, the encampment seemed challenged by the elements.  Every tent was elevated onto wooden pallets or sited upon some kind of raised, wooden platform.  All of the tents were wrapped in multiple layers of traps and plastic, and tied down with rope and bungee cords.  Overall, the encampment looked soggy, wet, and droopy.

Yet, the mood was festive, and the sense of community was pervasive. 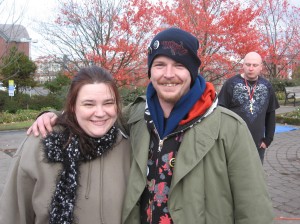 “It’s been awesome, camping out,” said Dylan Levison, originally from Puyallup, while standing on the corner of 21st St and Pacific Ave.  “And it hasn’t snowed, yet.”

Ryan also pointed out two Porta-Johns that serve the camp.  One Porta-John has been donated by a supportive labor union and the other by a fellow-protester.

But is the occupation having any impact outside the encampment?

“Passerbys are anxious when they make eye contact with us – let’s say when they drive by on Pacific,” acknowledged Levison.  “But two soldiers came by – they were offended by some of the signs – but they engaged us in conversation.  They told us that they did see the corruption in government and in business, but that they needed a pay check.  It was a good discussion, so good things are happening.”

Others see the grass-roots approach working, with new and vital connections being woven between disparate groups in society.

“Our relationship with the Tacoma Police Department is quite good,” said Ryan Way.  “We’re getting lots of unofficial support from the police, and from the fire department.  They’ve told us they’re getting another 50 lay-offs, so they know the story of what’s happening in this country.” 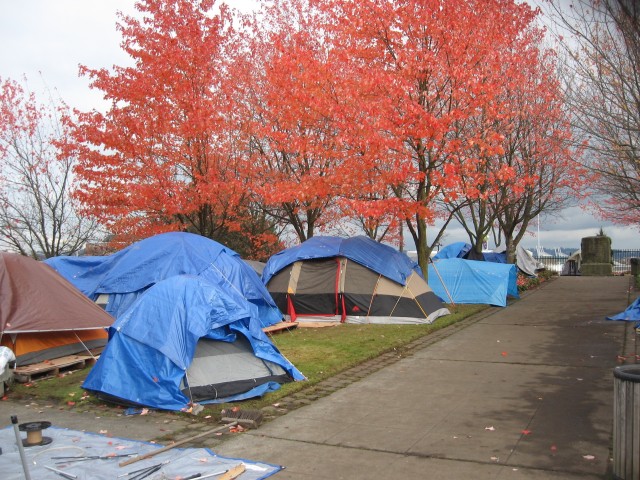 One way the protesters seek to ensure their standing in the community is to maintain the appearance of their camp, which, although sodden, is clean and generally orderly.

“We try very hard to maintain the sanitation and how things look in camp,” said Ryan.  “We don’t want it to look like an eye sore.  When a tent begins to look kind of ragged, it comes down.”

“This water is 70 degrees,” said ‘Josh,’ washing dishes outdoors in a series of plastic totes, and apparently proud of maintaining health standards.

Another protester said that their camp has been applauded by visitors who have been to other Occupy camps and said the Tacoma group “is one of the best in the country.”

“We want to show a good example,’ said one protester. 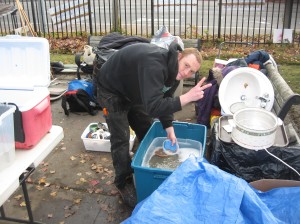 “We’re getting lots of support from locals and a neighborhood shelter down the street,” said Ryan.  “They let us take showers.”

Yet, some of the local businesses are picking up the burden of cold, wet campers needing a place to warm themselves and clean-up a bit.

“We get a few protesters every day who come in to use a bathroom,” said a barista at the Cutter Point coffee shop across the street from the encampment.  “Somebody even washed their hair in the sink today, but over all the protesters aren’t really making that much of a difference for us in terms of clean-ups.  Remember, this is a downtown location, so this kind of thing happens all the time.

As for daily routines, the campers receive lots of food and supplies from local supporters who deliver home-cooked meals, or leave non-perishable donations that keep everyone well-fed.  The spacious food tent is clearly well-stocked.

“We get lots of ramen, soups, that kind of thing,” said Ryan. 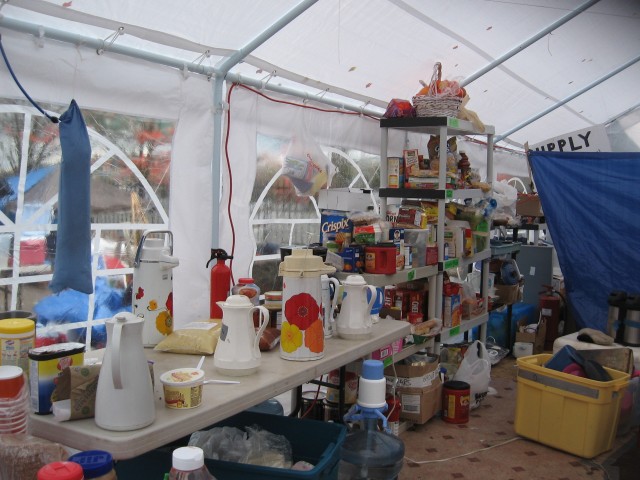 But there does not appear to be a common eating or assembly space, and those functions seem to take place outdoors.

Ryan’s brother Rob Way, is also a member of Occupy Tacoma, and is known as a “Day One Guy,” having camped-out every night since the occupation began on October 15th.

When asked about the Occupy Movement protesters in Fairbanks, Alaska who braved 41 degrees below zero this week, Rob and “Day Three Gal” Shaun Williams laughed.

Rob and Shaun also acknowledged that some protesters have returned home.

“It was too much for them – not so much the cold and rain – but other issues, like a bad knee,” said Rob.

Although the encampment is composed of young adults in their late teens or twenties, there is one “elder” on site.

“I’m the token Republican and the only gray-haired guy out here, laughed Patrick Sadlier, nominally of Auburn.  “But I fully support everything these young people are trying to do,” he said as he held a placard on 21st St.

“For me, it’s about core constitutional rights,” announced Patrick, warming to his topic.  “People who have lost their homes through foreclosures or evictions – people like that have a right to put down a tent on public property.  This land has been paid for in blood!”

Mr. Sadlier is passionate about his views, but he also delightfully light-hearted and acknowledged that he is a self-proclaimed “senior advisor” to the young protesters.

What Mr. Sadlier means by conjuring the memory of 1968 is not clear, exactly, but the overarching need for change is.

“This is a grass-roots movement – literally,” said Patrick.  “I’m standing on my turf, baby!” he said proudly, pointing to the grass beneath the many tents.

“These people (gesturing to the young men and women standing next to him) will not be heard by the other gray-haired people of society, so I’m talking for them,” Patrick said.  “So, I have a lot of people to talk to – I have a wide audience.  We’re not just the 99% – we’re more like the 300 – ‘The 300 of Thermopylae,’ holding back the tide; although I hope it turns out better for us,” he said with a chuckle.

Editor’s Note:  The Battle of Thermopylae is considered to be the foremost example of a small, determined and dedicated groups of soldiers to defend their homeland.  In September of 480 BC, King Leonidas led 7,000 Greek troops into battle against an invading Persian Army considered to number between 100,000 – 300,000 soldiers.  At Thermopylae Pass, Leonidas held off the Persians for several days until he was betrayed by a local who showed the invaders a secret route through the mountains.  Realizing he was being outflanked, Leonidas separated the bulk of his small army and ordered them to retreat.  Leonidas remained, along with 300 Spartan soldiers and another 1,000 allied Grecian troops.  Together, this small band held off the Persians for another two days, allowing the Greek army to gain safety beyond the reach of Persian cavalry and also ensuring that Greek naval forces could further attack the accompanying Persian fleet.  The “300,” as they have become known to history, held off the Persians by fighting to the death and were considered to be the critical component in what became an eventual Greek victory.  2,500 years later, their heroics are still being heralded – in Tacoma, no less.

However, what these new defenders are protesting and what kinds of change they want – or how they’ll obtain it – still hasn’t come into clear focus.

Nevertheless, their support is growing.

“I’m glad these kids are camping out,” said one elderly woman.  “Somebody has got to do something to protest the corruption in this country.  What is happening down in Washington, DC – it’s terrible.”

This entry was posted in Culture, Events, Politics. Bookmark the permalink.