With nervous anticipation my wife and I took our three children on their first plane ride recently.  Our trip was from Seattle to Albuquerque, New Mexico, a three-hour flight.  We thought this would be a daunting task with a nine, six and three year-old in tow.

I would not normally endorse any particular airline, but Southwest’s “bags fly free” program was fantastic since we were already trying to keep track of the kids.  Sea-Tac Airport also has this wonderful thing called the “families line” where families with young children skip to the front of the security line.  This brightened my wife’s day.

Our fears were unfounded as we grabbed some breakfast at the little Wendy’s in the main atrium of the airport and then casually strolled to our gate.  The smiles on all our faces were a welcome sign to the beginning of our vacation.

“There goes a plane, Dad!” my daughter squealed.

“Another is landing,” yelled my oldest son, while his younger brother just stared in awe.

The first group of travelers was allowed to board our flight and it felt nothing like normal for me.  With my regular job as a regional manager, I fly somewhere in the western United States two or three times a month.  Usually it feels like the passengers are zombie cattle being prodded along into flying trailers, with business people in a drone-like state stuck to their phones, laptops, tablets and all manner of things from Apple or Android.

Yet, this felt different, as though I was given a free pass in the express lane through the airport because I brought my family.  I was enjoying myself and because it was a Sunday I was also seeing different people that didn’t care about anything but the fun they were headed toward.  So, we boarded with pleasure in the second group, which was designated as family boarding.

As the plane stopped before the runway and the pilot said we were waiting on a mix-up in the paperwork, I began to feel my good fortune had run out.  For forty excruciating minutes we sat on the tarmac with three cranky kids trying to be good .

“I want to get off the plane now,” whined my youngest son. “I’m bored.”

The pilot graciously came back on the speakers to say we were ready to go.  The plane lifted off to the sound of children – not only ours – cheering their approval.

That’s when I remembered my first flight.  It was a solo trip at twelve-years-old from Atlanta to Salt Lake City to visit my grandparents for the summer.  My nervousness out-weighed the excitement my children exuded on this trip, which leads me to believe they are much braver than I was.

My mother had put me on the plane alone, not being able to afford another ticket to accompany me on the trip.  I was so frightened I used the bathroom at least three times before boarding the plane.  Fear kept me glued to the plastic seat the entire journey until the airline attendant came to retrieve me so I could meet my grandmother in the Salt Lake City terminal.

After a few hours, I forgot all about my anxiety and spent the next couple months exploring every nook of the storage unit facility my grandparents managed.  Grandpa let me work jobs to earn a few bucks to buy a skate board.  Those were fresh and thrilling in the 80s.  Those wheels carried my younger cousin and me swiftly through the halls and little ramps of the storage buildings, feeling free and rebellious.

I was allowed to drive the golf cart through the alleyways until I almost ran Grandma over because I was playing with both feet while driving.  I was banned from the cart for the rest of the summer.

An abandoned unit turned up a fancy aluminum bicycle, but I wasn’t allowed to have it without paying.  Grandpa said: “I have to make some money off this unit, so you have to pay ten bucks or I’ll have an auction.”

I earned the money retrieving Dr. Peppers for Grandpa any time he desired one.  The drinks were free for him from the machine he had outside for customers.  He taught me the “trick” to get the cans out with no coins.  He paid me a quarter for each visit to that old machine.  After nearly two weeks I bought the bike and was riding all through the neighborhood.

When the time came to fly home I was heart-broken, loving the time with my grandparents.  Just five short years later Grandpa died of cancer, and I didn’t cry – I couldn’t because it hurt too much.  It was these thoughts that played through my mind as my young family landed in Albuquerque to begin the drive to my parent’s home in southern New Mexico.

“Are you kids excited to see Grandma and Grandpa?” I asked.

Approval rang out from all three children as we scooted down the highway.

“Will Grandpa let me ride on the four-wheeler with him?” asked my oldest son.

Upon arriving at the cabin nestled in the Sacramento Mountains, my father strolled out to greet his grandchildren with the gentle growl of a hermit.  I smiled, remembering my childhood trip, knowing my children would have a similar joyful experience.  It didn’t matter how the plane ride home would be as this moment made it all worth it.

Family matters, and my younger brother’s wedding drew us together.  Grandma came down from Salt Lake City as well.  We reminisced about my summer visit long ago and how things have changed since then, and how Grandpa would have enjoyed being with us now.

A week later, as we headed back to our home in the shadow of Mount Rainier, our two boys slept most of the way, but it was my daughter that was most like me.  She was devastated.  Tears constantly streamed down her face and she proclaimed how upset she was to leave my mother’s house.

“I wanted to stay with Grandma,” she sobbed. “I love her so much and want to live there now.” 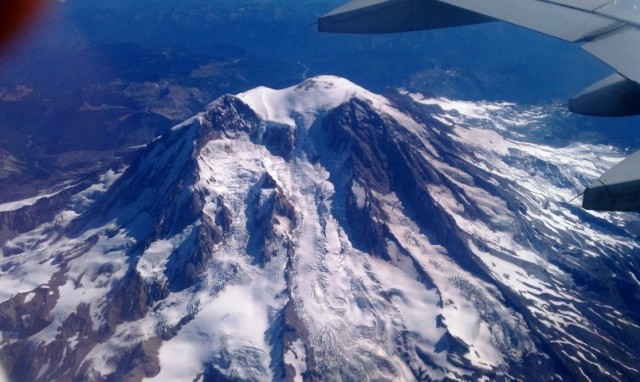 I didn’t know what to say, so I didn’t say anything.  My wife hugged her for a long while and let her know it was okay because she could call Grandma on the phone.

Now, I see family plane rides as a door to great family moments in a time when many extended family members do not live close to each other.  I just wish the prices would come down.  Kids don’t fly free.

This entry was posted in Josh Magill. Bookmark the permalink.