Mah nish tanu: Why is this night different from all other nights, (or days)? – Passover in Quarantine

Special to the Mountain News, from contributor Rachel Holtzman

Editor’s Note: America may not be “raring to go,” as the President as hoped a few weeks ago, but Easter and Passover are upon us.

Passover is a unique religious celebration, as it takes place exclusively in the home with extended families gathered together. This year that will not happen. Will Jewish families ZOOM their Seder meal, as the Passover feast is termed? Or gather in onesies and twosies, or three or four at safe social distance, whatever number folks have selected for their quarantine? Regardless, Rachel Holtzman offers her perspective.

“… And you shall tell the story to your children, of freedom from the plague that beset Pharaoh. (Well, close to it anyway.)

… That it came to pass that the Chinese let loose upon this nation a terrible pestilence – (NO, NO! The Chinese didn’t cause it.) They were mightily stricken and thousands died.

But, the Great and mighty Pharaoh, in all of his wisdom, summoned a Fox to send out a decree from his castle of Mara Lago gold, that the nation need not fear as we, his people, at least the ones who love him and wear his stupid little red baseball cap, are definitely safe, for who ever heard of anything like a virus you can’t even see, swim across the Atlantic Ocean. What? It’s the Pacific? What difference does it make anyway? It’s a lot of water.

So we, the people, in order to form a more perfect front went on about our business, working in close cubicles, sweating together over bar bells and hugging our Bobes.

Yet, some medically minded and some globally focused and some who read The New York Times and watched CNN were not so sure. And those very same nay sayers and doubters – so annoying those pesky doubters – looked across those water at other kingdoms and yea, either those invisible little viruses could verily swim or they stowed away on the sleeve of a visiting Chinese gentleman.

Italy exploded; Spain exploded. People were dying all over the place. It was time for the mighty one, blessed be his fortune, to open his eyes, both the blind one and the other one, and pay attention to all the worried little health experts who had been trying to get his attention for weeks and weeks.

“We have a situation that may warrant a bit of your time, oh mighty one.”

And the mighty one removed the Whopper from his mouth and said, “Whaa?”

“We may have a serious health crisis beginning to develop across the land.”

The mighty one reached for the remote. “Hannity hasn’t said a word about it. What’s to worry?”

And so the see-saw began. Ever since the junior vice president from Microsoft returned from a business meeting in Beijing six weeks ago with another viral stow away on his briefcase, we joined the Siege of Nations. Health experts pleaded for a national response and the Mighty one denied what he heard.

A new word was heard across the land – coronavirus. We became so familiar with it that it got a nickname, Covid-19. Republicans said, “Work will keep you safe!” Democrats said, “Take to your homes!” And students said, “Spring Break!! Florida!! YAY!”

But here’s where it gets tricky. The plagues of olde were delivered in one fell swoop. Our Goddess of Nature, seeking to have us reassess our values and get our closets cleaned out, has scattered this plague like fairy dust across nations, spacing it enough so that countries whose death toll have peaked, almost, can now send face masks and ventilators to us.

New heroes have arisen – No, not Pense who wants to send everyone to church on Easter Sunday, but real heroes – cashiers shielded behind plastic in our supermarkets so people can get food, lab technicians who must handle all the instruments for sterilization used to treat the Covid patients, undertakers who must order a refrigerated trailer to house the victims, newscasters who set up home studios so they can keep everyone informed, kindergarten teachers who are trying to find a way to reach their kids, and the parents who try to manage life with those kids while working from home to keep the wheels of commerce moving.

And then there are the frontline heroes who have been pleading for more masks, more gowns, more shields and more respirators to the other heroes, the Governors who in turn plead to the Great and Mighty one who says, “Nay! Fight among yourself so the manufacturers can get the best price. That’s the business motto that has made this country great again. And anyway, what are all those doctors and nurses doing with those masks? Throwing them away?  I sent them thousands. Couldn’t they just wash them out? Maybe they are coming in the front door and going out the back. I don’t know. Maybe. You never know.”

But what of the people who are confused? To whom does one listen? It surely does not seem to be the Great and Mighty one, blessed be his golf courses, for he vacillates like the temperatures of a woman’s body in menopause. Until this day, it has been every state and many cities for themselves. . . And what’s next?

Hark! There is hope. Cast your eyes to China. After four devastating months of restriction and death resulting from this pandemic, the rates of newly reported infection have begun to decline. The peak has been reached and begun to fall. Yes, the people wandering in the dessert of social isolation have many many sand dunes yet to cross. But we can do it. The banana bread made from those very over ripened brown ones are the new mana, and to walk bra-less through your home every day is a symbol of freedom to come.

And although the Great and mighty one thinks that his self-contradicting verbal directives that all point to how amazing he’s handled this disaster, and believes the number of those who watch him is a sign of how popular he is, November is coming!!!

Ma nish tana? We shall pull the curtain aside and see that the emperor has no clothes — and swiftly pull it back. We will put our bras back on. We will shake each other’s hand and we will storm Mara Logo with votes under the blue column and enter the promised land (with all due respect to our Arab neighbors) and live to retell the story next year. 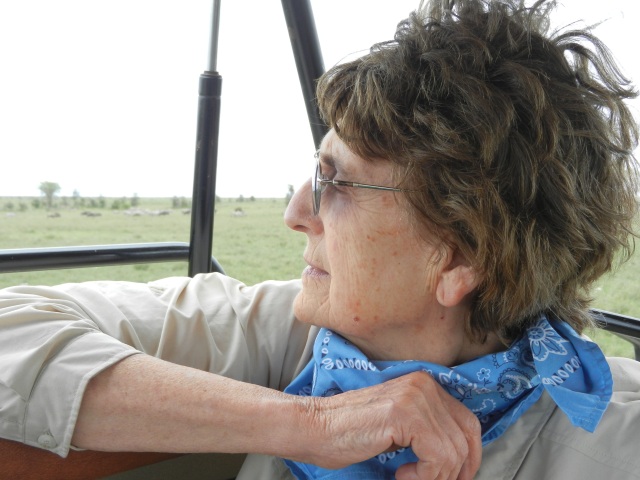 Rachel Holtzman, on safari in Africa, circa 2012. Photo courtesy of Ms. Holtzman.

This entry was posted in Culture, Family, Rachel Holtzman, Spirituality. Bookmark the permalink.

1 Response to Mah nish tanu: Why is this night different from all other nights, (or days)? – Passover in Quarantine