Although the 78th Annual Daffodil Parade lost its sunny skies somewhere around Tacoma, it still dodged the raindrops three towns later when the twenty-two Daffodil Princesses and their Queen, Claire Fleming, arrived in Orting Saturday afternoon. 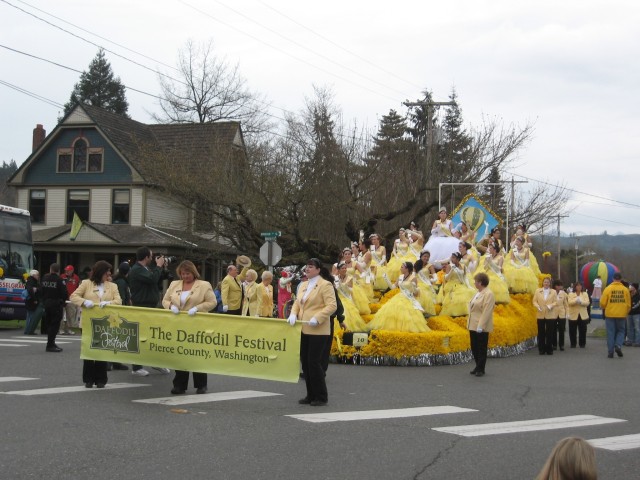 The Royal Court opened the Daffodil Parade in Orting Saturday.

Officials estimated the Orting crowd to be about 5,000, and they lined both sides of the main street, Washington Ave, but also filled the City Center Park that runs along side the thoroughfare.  The Park was filled with food and craft vendors, and the combined festivities produced an audience that buzzed with excitement during the two-plus hour parade that included over 125 floats, marching bands and performance groups. 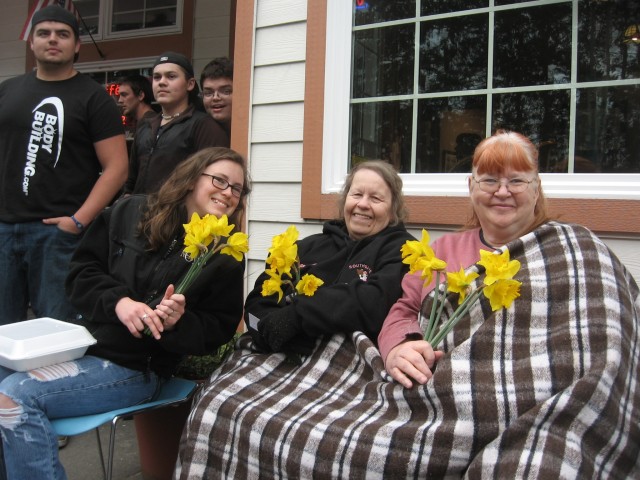 Not all princesses were marching in the parade.

Dave explained that the Orting Valley was once a sea of daffodils stretching from Puyallup to the foothills of Mt. Rainier.

“Farmers grew daffodils for the bulbs,” he said, “and they had to cut the flowers to make the bulbs split and be ready for harvesting.  There wasn’t a commercial market back then for all the flowers, so they had to do something with them and that’s how the Daffodil Parade got started.  It really began in Orting over a hundred years ago.”

Dave further explained that in the olden days the floats would be completely covered in daffodils, but many floats in Orting Saturday only used a token amount.

Nevertheless, one float, the award-wining entry of the Puyallup Indian Tribe, sported over 100,000 daffodils, all reportedly grown in our area.

The twenty-three ladies of the Royal Daffodil Court represented their high schools, which included over a dozen school districts ranging from Eatonville to Seattle.  Besides a district float, the ladies were supported by their high school’s marching band, dance troupe, flag corps and gymnastic team. 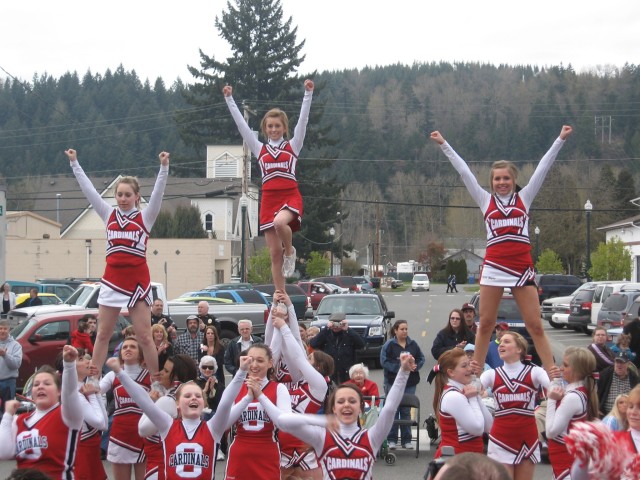 The thousands of adolescent performers were shuttled between the four parade routes by a fleet of buses and equipment vehicles, reflecting the enormous logistical and administrative underpinnings to the day’s festivities.

As a reward for their labor, the dozens of float drivers were treated to a free dinner at the Orting Eagles, according to Dave Goff.

﻿ The later factor has rescued the Daffodil Festival and Parade.  As recently as two years ago, Daffodil organization feared the festival would fold due to a dearth of financial supporters and a flagging interest in the community.

“We had a real resurgence in the past few years,” said Brad Stevens, President of the Daffodil Festival.  “We have really increased our community involvement.  The Daffodil Princesses are very involved in a number of community projects.” 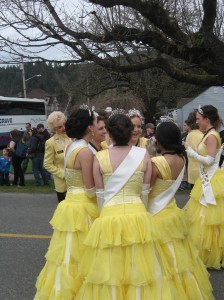 Seeking warmth on a chilly day, the princesses huddle.

As a result, corporate sponsorships have increased and public awareness and support of the Daffodil Festival has soared.

Stevens recited a lengthy list of community activities in which the Daffodil Princesses participate.

“They’ve been mentoring kids down at the Boys and Girls Clubs, helping them with homework,” said Stevens, “and that will continue after the parade.”

In addition, the Princesses have volunteered at the Emergency Food Network warehouse packing food containers destined for local food banks, and have done similar work at the World Vision headquarters in Federal Way for both international and domestic aid shipments.

Closer to home, the Daffodil Princesses judged the recent Most Magnificent Mutt Festival at Frontier Park, where they were the epitome of graciousness as they selected kids and their dogs in categories as varied as “softest ears,” or “wettest nose.”

“Their duties as Daffodil Princesses won’t end with the Parade,” Stevens added. “Next weekend they’ll be judging the marine floats at the Yacht Parade in the Thea Foss Waterway in Tacoma.”

Stevens also said that in two weeks they’ll be official greeters at the Spring Fair, held at the Puyallup Fair Grounds. 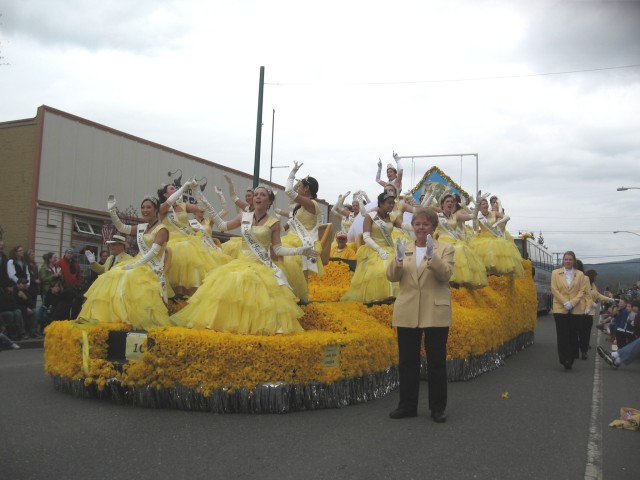 “They’ll be in another twenty parades, too,” announced Stevens.  “They’re scheduled all through the year, and they’ll even be in the Christmas Parade in December!” 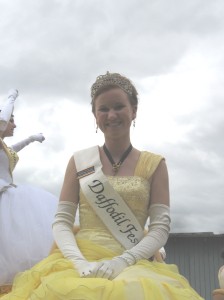 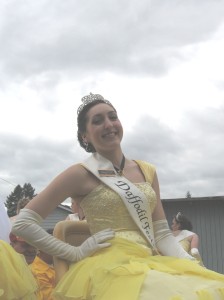 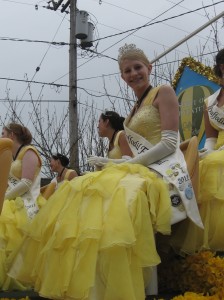 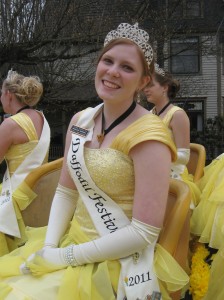 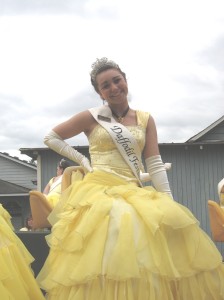 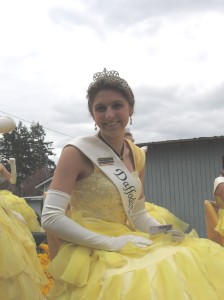 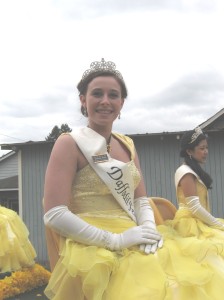 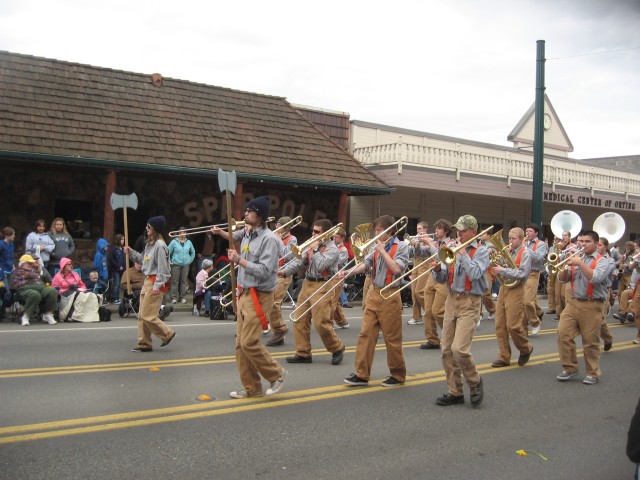 The Eatonville Crusiers Marching Band sounded sharp in their performance Saturday in Orting.