Although they chased their share of the 9,000 plastic eggs filled with candies and small toys, the kids also enjoyed hay rides, farm tours and bean-bag tosses, along with spending time at crayon and coloring stations, or ringing the school house bell in the farm village museum.

The hunt begins in the 3-4 year old section.

“This is one of the fun times,” said JT Wilcox, appearing incognito despite being the recently-elected state representative from the 2nd Legislative District.  “It makes me proud I’m part of this family business.”

Conversely, JT’s brother, Chris Wilcox, was quite visible as he coordinated the festivities with his farm staff and several event partners, most notably the South Pierce Fire and Rescue Department and the Pierce County Library System, which had displays and hands-on activities for the kids. 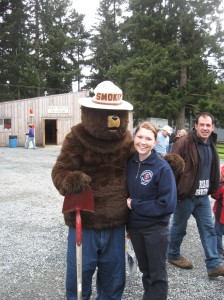 Smokey the Bear and M. Stennes from the South Pierce Fire and Rescue Department

“Smokey the Bear” and a large-scale “Chicken Little” were also present, but most of the young ones, which made up the majority of the children, shied away from these unfamiliar figures.

Chris Wilcox said that the Easter Egg Hunt idea was borne out of a desire to pull together various local hunts and combine them into one event that would feature activities that would allow families to enjoy a whole day in the country.

“In the past, the Easter egg hunts would be over in about three minutes and then what would families do?” said Chris.  “So this way, the kids and their moms and dads can make a day of it, plus, it lets the public see where their food comes from.”

Wilcox officials said that last year about 700 people attended the event, so the Wilcox Egg Hunt is clearly appreciated by the public, and many families interviewed by the Mountain News said they had traveled from Olympia and Tacoma to partake in the fun.

Another partner, the Rainier Antique Tractor Club, pulled several hay wagons throughout the grounds, and families toured the various manufacturing plants and saw the egg shelling and liquid egg packaging operations.  However, tours of the chicken houses, which contain over 700,000 birds, were suspended for biosecurity reasons, but Wilcox officials say they will have sealed, glass-walled tunnels through the houses in the near future so that visitors can see the complete operation of this organic egg farm.

“The chickens love to see the visitors, too,” said Chris Wilcox, as he described how the chickens had crowded near viewing stands in past years to get a look at who was coming to see them.

Visitors also learned about important changes in the Wilcox operation now that the 100 year-old company no longer produces milk.

To begin, 200 acres of former dairy pastures are now planted with organic beans, and come harvest time will be headed to sale at Costco.

In addition, another 200 acres is planted with winter red wheat and will be fed to the chickens.

“You can never be 100% certain how organic your feed is, especially if it comes from some place like China, so we are growing more and more of our own,” said Chris Wilcox.  “Last year we grew Triticale – another kind of wheat – and it’s been very successful.”

Chris told the Mountain News that Wilcox Farms spends $22 million on feed for its chickens – its biggest expense – and much of it comes from eastern Washington.

“We’re looking for local farmers to grow grains here,” he said.  “We’d buy it, and it’ll be great for the local economy.

Wilcox said that he could easily imagine that Wilcox Farms could pump $10-20 million into the regional economy on feed purchases.

“Why pay to have it shipped over the mountains?” Wilcox said.

Adding to the notion of building the local economy, Lisa Wilcox, Chris’ wife, heads a specialized segment of the Wilcox Farm that runs an organic Angus beef herd of about 25-40 head. 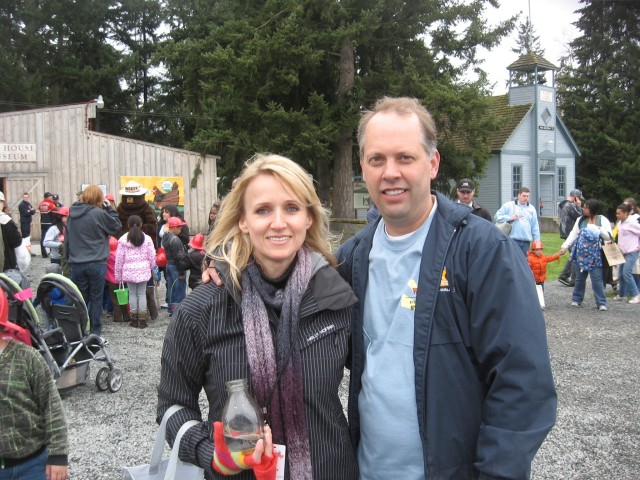 “We’ll be harvesting about twelve head in summer and more in the fall,” said Ms. Wilcox.

Direct sales can be arranged at a butcher in Tacoma or at the Wilcox Farm.

In addition, Lisa is pioneering the use of Facebook and Twitter to carry the advertising and marketing for her beef products.   See www.WilcoxAngusBeef.com on the Internet and Grass_Fed_Beef_ on Twitter.

“It’s the wave of the future,” she says.

Chris is also a visionary and sees the importance of local, sustainable farming.

“It’s the lesson we learned from our experience with the dairy and trying to compete with the large corporate operations – we can’t,” Chris said.  “But a family-run organic egg farm can be very successful if it stays local and uses sustainable practices.”

To that end, Chris said that the egg operation is now exporting its chicken manure to its feed growers, thus ensuring that their crops will be organic.

“We’re making it a closed loop,” he said.

As for staying local, Wilcox puts great importance on his role as a food producer to his friends and neighbors.

“My last name is on the product, so, you bet it’s serious,” he said.  “I’ve got to be able to look my customers in the eye.” 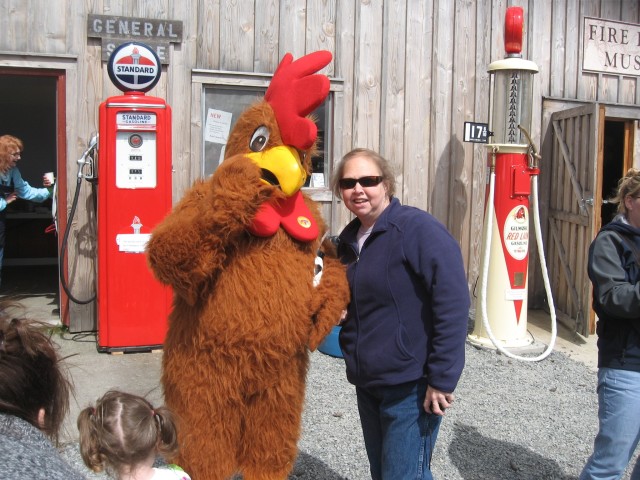 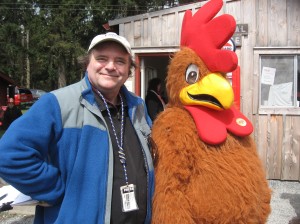