Founder of Tea Party speaks to Republicans in Parkland

Keli Carender, the young Seattle woman widely acknowledged as the founder of the Tea Party movement, spoke to about 30 members of the 2nd LD – 29th LD Republican Club last week in Parkland.

In Seattle’s Westlake Park in 2009, Carender organized a protest against President Obama’s financial stimulus program, and about 120 frustrated conservatives attended.  From there the Tea Party movement ignited nationwide.

In person however, Ms. Carender does not look like a political powerhouse upon first glance.  She looks much younger that her 31 years, and with her embroidered jeans, artsy cotton blouse, and lime-green Converse All-Stars sneakers, she could easily be mistaken for a typical college student. 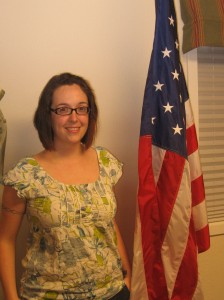 Keli Carender, founder of the Tea Party movement, posing for picrtures after her presentation to the Republican Club in Parkland.

Once she starts speaking, however, the depth of her convictions come soaring forth.  She is especially articulate when she relates how disconnected she feels from the power and policies of government, particularly the federal level.

“I called Senator Patty Murray to complain about the stimulus package, and got a message saying her mailbox was full,” said Keli.  “Then I wrote letters to both Murray and Senator Maria Cantwell, telling them of my opposition to the stimulus, and I received letters back that said, ‘Thank you for your support!’” she said to raucous applause.

To her very enthusiastic audience, Ms. Carender said her journey in becoming a voice for millions of Americans actually began in a very personal way – frustrations with her liberal friends and colleagues.

“I got fed up living in a place where supposedly tolerant people are really intolerant,” Carender said, describing her social interactions with peers – many of whom were fellow comedians in the Seattle club scene who loudly objected to her conservative viewpoints.

“I got sick of hiding my feelings,” she added.

Keli decided she had two choices – one, accept not having a voice and going with the liberal flow of things; or two, holding a protest.

Going into action, she started a blog to voice her conservative views, and developed her Internet political identity, “Miss Liberty Belle.”

“When I decided to hold a protest at Westlake Park, I didn’t know if anyone was going to show up other than my parents and me,” she said.

But two weeks of emailing associates she had met in a handful of conservative gatherings led to support from local conservative talk radio hosts.

The Westlake event was termed the Porkulus Protest, and a follow-up gathering a week later drew 300 people, with 1,200 participating in a third protest two weeks after that.

Nearly two years later the Tea Party movement is now well-known and Keli works for the Tea Party Patriots, one of the organizations that has coalesced out of the many grass roots protests.

Reflecting that organization, Keli’s presentation in Parkland was very organized, concise and polished.

“We’re going on the offensive,” she announced to the Republican Club members.

Describing her plan of action, Keli declared that the federal government has “way too much power,” and she wants to “bring it back to the states.”

Keli’s main objective is wresting control of health care away from the feds and allowing the states to choose what kinds of social programs it desires, if any.

“We are advocating the end of Obamacare,” she declared, adding that she champions the dissolution of Medicare and Medicaid as well.

“The federal government has had control of healthcare for years and they have failed miserably,” she announced.

However, Ms. Carender did not say if she advocated the transformation of the Veterans Administration health care system to a private operation, such as with an adoption of a voucher payment plan.  The federal government owns and operates the 172 hospitals of the VA, the world’s largest network of hospital care, and a voucher system has been advocated recently by congressional Republicans as a replacement for the federally managed Medicare and Medicaid programs.

However, Ms. Carender recognizes the enormity of her goals.

As a result, Keli is advocating a transformation of her grass roots protest movement into one of hyper-local political action.

“We need to become watch dogs of every aspect of government,” she said, and described how effective just one person can be monitoring a school board meeting or a local town council.

Keli clearly sees the penetration of Big Money and Big Power into even the smallest of governmental entities.

Keli’s specific role for herself is to guide the Tea Party Patriots to be neutral watch dogs of government, and to advocate for certain issues and pieces of legislation.

As their first overt political action, the Tea Party Patriots are seeking to form a health care compact with other states that would allow those states to opt out of federal regulations and give individual states more say in how health care is delivered.  Keli said that Georgia and Oklahoma are two states that are discussing this kind of political alliance.

One element of health care that she would like to see abolished are the mandates that states impose on health care insurance companies.  Specifically, she railed against regulations that require women who have had hysterectomies to still pay for maternity care benefits in their group insurance plans.

However, Carender did not acknowledge the benefits of group insurance plans, as costs and risks are spread over a large number of people to the general betterment of all.  For instance, Keli did not discuss in her example of hysterectomies how women would be charged more for their operation if they didn’t have the benefit of a group plan.

In the question and answer session that followed her remarks, Ms. Carender gave more specifics to her intentions.

“I’m really disgusted that people get health care for free with Medicaid (the entitlement program for poor Americans),” she said.

Her comments came in response to a statement made by a member of the audience, Jack Francis, who spoke rhetorically and said, “If your health care is not important enough to you for you to provide for it, then why should it be important to me.”

Such personalized and ego-centric thinking reflected much of the discussion.  At no time did any audience member or Ms. Carender voice a vision for how society should care for ill and disabled people.

Along those lines, when asked to describe her personal view for health care, Ms. Carender interpreted the question to mean what kind of medical insurance plan she desired for herself, and not the larger question of the health care system that she is planning to espouse for Washington state in any potential compact with other states. 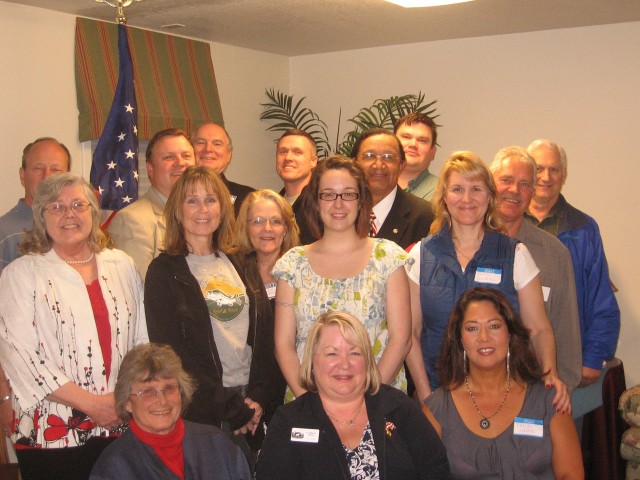 Keli Carender's remarks were so well received by the Republican Club, that afterwards, more than a dozen people wanted to be photographed with her.

In conclusion, Ms. Carender acknowledged that the Tea Party movement is “messy and inconsistent,” but she clearly feels – and articulates superbly well – the anger many people have over how little power they have in their lives. 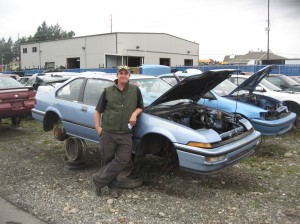 Boss of the Year, JC Cahill

Now in Spanaway and Graham

For more  information, click on our ad in the column to the right.  Thanks!

This entry was posted in Culture, Events, Parkland, People Profiles. Bookmark the permalink.