Over the past several years, there have been many proposed systems of caring for unwanted and abused animals, especially horses, in Pierce County.  A slew of controversial and problematic efforts were put forth by private rescue organizations, such as Ripley’s Horse Aid Foundation and Hope for Horses, and out of that experience a modest network of care has arisen.

With the Pierce County Animal Control as the lead agency, this system is now buttressed by established private horse rescue organizations, such as Save A Forgotten Equine (SAFE) and the PCAC’s contracted boarding facilities, and together they have intervened in the most egregious cases.

But there still exists a yearning, a lingering question that seems to hang in the air, Can’t we do a better job of taking care of all these unwanted animals?

Well, yes, we can, and the name of a woman doing so is Michelle Feldstein, 66, whose sanctuary is a 270-acre spread in Livingston, Montana called Deer Haven Ranch.  Although perhaps too far from Pierce County to have any immediate or practical influence here, at least her story and the inspiration it generates may have a truly significant impact.

After a Reuters story appeared on the Internet about her extraordinary care for a blind horse named “Sissy,” Michelle’s ability to deliver skilled restorative and rehabilitative care to a variety of unwanted or abused animals is becoming well-known around the globe.

But the story of Sissy the blind horse encapsulates Michelle’s whole approach to caring for unwanted animals.

Sissy, a 15-year old white quarterhorse, came to Deer Haven recently after a near-by large animal rescue facility went defunct due to administrative and financial turmoil.  Michelle was asked to take Sissy with one proviso, the horse had to come with her “seeing eyes entourage,” a flock of five goats and five sheep.

“Of course, I’ll take ‘em,” she said as she recounted the story to the Mountain News, adding, “Any animal that needs a home will find one at Deer Haven.”

Sissy, a white mare, is surrounded by her entourage.

Now Sissy and her ten assistants mingle with “the horse herd” out on 75 acres of pasture.

“The goats and sheep tell her where the fence is, and help her negotiate around the barn area,” Michelle said.

In fact, Deer Haven is well-suited for maintaining blind horses.

“We use only 3-strand smooth wire – not barbed wire – on the ranch.  It’s much safer,” said Michelle.  “Plus, in the ‘blind pens’ we use only sheep-fencing, which has only small opening so that a horse can’t get a hoof caught.” 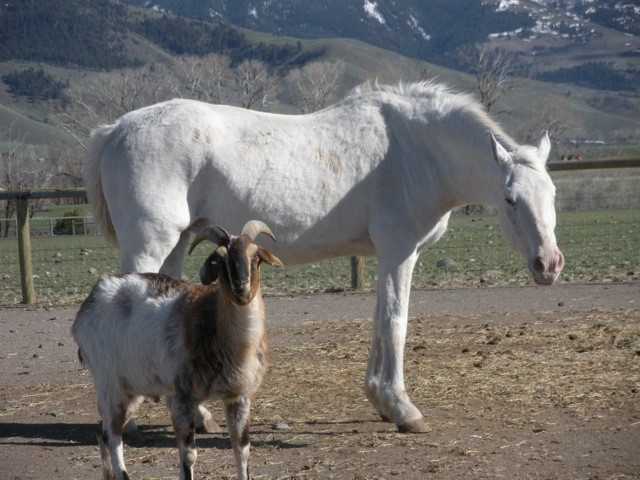 Sissy and one of her assistants

With that kind of set-up, Michelle has begun receiving more sightless equines.

“Missy” is a paint that has just arrived, while “Willi,” an Appaloosa from Idaho who has just lost his sight, is expected shortly, as is “Sam from Ohio.”

Sam will also be arriving with his owner, a young woman who has cared for him since they both were young, but now that she is deploying to Afghanistan and he has become blind, he needs the full-time attention of someone like Michelle.

“Sam’s owner will be staying free for a week in our guest lodge.  It’s our gift to her,” said Michelle.  “This way she can help Sam make his transition.”

Sam’s “eyes” will be a filly named Syettte and Missy’s will be a thoroughbred. 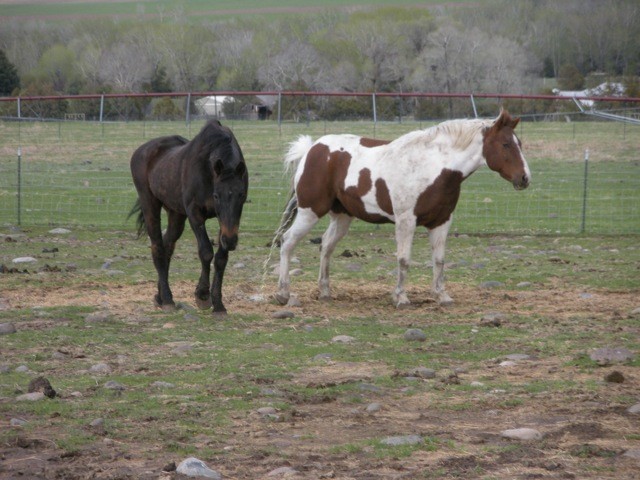 Missy, the paint, and her eyes, Kelly, the dark thoroughbred.

As for caring for a small herd of blind horses and their companions, Michelle acknowledged that the undertaking can be daunting.

“The whole thing is to put them some place where they don’t get injured,” she said, “but it’s a lot to deal with.”

Michelle figures that six sightless equines will be the limit for Deer Haven. 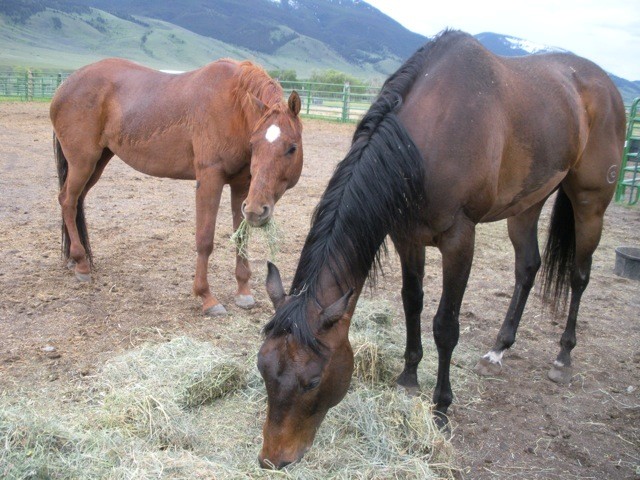 Sam from Ohio has arrived, and is currently bonding with his new buddy, Cheyenne.

As for maintaining the other critters on the ranch, Michelle does all the work and runs an efficient operation.

Supplementing the pastures, Michelle has regular hay deliveries that bring in 40-tons yearly, or over 800 bales.  In addition, a 100-acre pasture is kept fallow all summer and is fertilized and irrigated.

“We graze all the animals there in the winter and it gets us through,” Michelle said.

When asked about finances, she demurs, “My husband loves me very, very much.”  Michelle is married to the former editor of Mad Magazine, Alan Feldstein, but her operational costs still are reported to be in excess of $50,000.

“We get lots of donations, too,” said Michelle.  “Many of our neighboring ranchers think we’re doing a good thing and they want to help.  In stead of giving us a cash donation, I ask that they send them money directly to our feed stores.  They know exactly what we need.”

Along those lines, Michelle has structured Deer Haven to be a streamlined organization.

“Deer Haven is not a non-profit,” she said.  This way, donors know exactly what they are buying –where their donations are actually going.”

Michelle declared that non-profit animal rescues tend to have too many people, with too many layers of bureaucracy.

“I don’t play well with others,” she said with a laugh.  “In those non-profits there are too many roles, too many glitches.”

Continuing, she said: “I do what I believe in.  This is my passion.”

But, Michele does have some assistance from family, with her daughter handling the accounting while her son-in-law takes care of the animals when Michelle is away from the ranch.

“He took care of things when I went to Billings last week to see Sugarland.  It was great!  I stayed over night because it is a two hour drive and the weather was treacherous,” she said.

“Yeah, it may sound a lot,” she said with a chuckle, “but it very doable.  Twenty-five cats are in the house, and the littler boxes get changed two-three times each day.  I assure you, there is no odor when you step into the house.”

“I use two excellent vets – one for large animals and the other for the small guys.  I probably pay the salaries of the vets’ staffs each month, though,” she acknowledged.

“I take what I do very seriously,” she announced authoritatively.  “There is a trust set up to continue to the operation of Deer Haven once I’m no longer able to run things.  After eighteen years, I’ve put too much energy and emotion into the land and the animals to let it be jeopardized.”

Michelle pledges that all the animals at Deer Haven will be allowed to live out the remainder of their lives there, and in the short-term her son-in-law will run daily operations.

“I am very blessed to be able to do this,” she declared.

All Pictures Courtesy of Michelle Feldstein 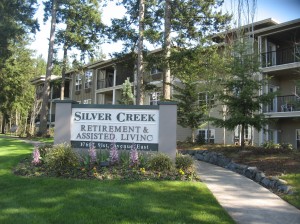 For more information, click on our ad in the right-hand column.  Thanks.

This entry was posted in Culture, Environment, Nature, People Profiles, Pets and livestock, Remarkable men and women. Bookmark the permalink.