County officials are applauding a savvy driving public that has found alternative routes during the past year as the expansion work on 176th St intensified.

The Big Kahuna of road closures – for scale and duration – commenced Wednesday, June 22, as the 176th St East Bridge over the Tacoma Rail tracks in Frederickson was demolished and removed; nevertheless, traffic is moving easily throughout the area.

The 176th St bridge over the railroad tracks in Fredersickon was demolished and removed in less than two days. Demo work was performed by Rhine Construction and Goodfellows Brothers. "Our guys really kicked some butt," said one construction worker.

The bridge work on 176th St is being performed just west of Canyon Rd and the Frederickson shopping center.

“Things are going great,” said Ramiro Chavez, Project Manager for the Pierce County Department of Public Works and Utilities.  “Our communication with the public is paying dividends,” Chavez added, “and drivers have found alternative roads.  Everything seems to be running smoothly.”

Chavez said the bridge closure is the third for the 176th St project, which began about 18 months ago, but this one will be the longest – stretching for at least four months until early November, 2011.

The old bridge will be completely rebuilt as a concrete structure at the cost of $3 million, and will carry five lanes.  The four-month closure will save taxpayers at least $1 million Mr. Chavez said, as crews do not have to build a temporary alternative structure to carry traffic in both directions.

Close-up of the removal of bridge work on 176th St.

Drivers needing to get through Frederickson have several alternatives.  The official 176th St detour route is outlined with orange signs; for westbound traffic take Canyon Rd south to 200th St, then west on 200th St for 15 blocks to 38th Ave, then north on 38th back to 176th.  Eastbound drivers can follow the reverse route:  38th south to 200th, east to Canyon and then northwards back to 176th.

However, corollary road work is also being performed on Canyon Rd just north of the 176th St-Frederickson shopping area.  Mr. Chavez said that an additional lane has been added recently to the previous constriction of one-lane travel in each direction.

“That’s helping a little to reduce back-ups there,” Chavez said.

The real crunch may occur this Friday evening, June 24, when hundreds of Freddie Town families descend upon the area for the first Frederickson Summer Movie Night, held this year at the Pierce County Skills Center on Canyon Rd at 160th St.  Show time is “dusk,” and the feature is “Despicable Me.” 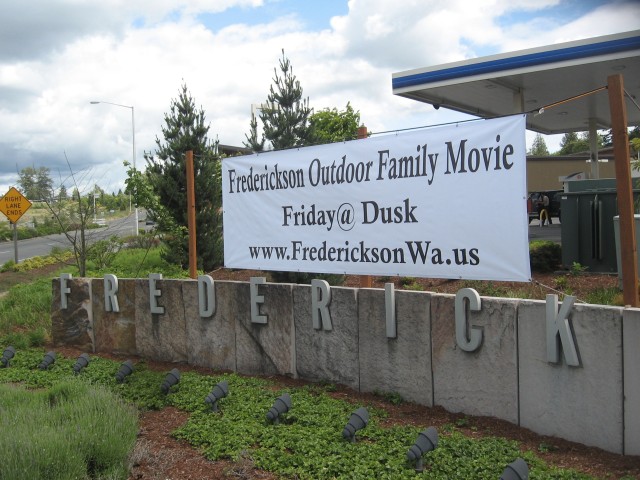 In addition to these projects, the on-going work to expand 176th to five lanes is in over-drive.  Work crews are busy along the five-mile traffic corridor from Gem Heights Drive in the east by the Winco shopping plaza, west through Frederickson to 28th Ave near Spanaway.

“There’s a lot of work going on,” Mr. Chavez said, adding that four different construction contracts related to the 176th St expansion are being worked on simultaneously. 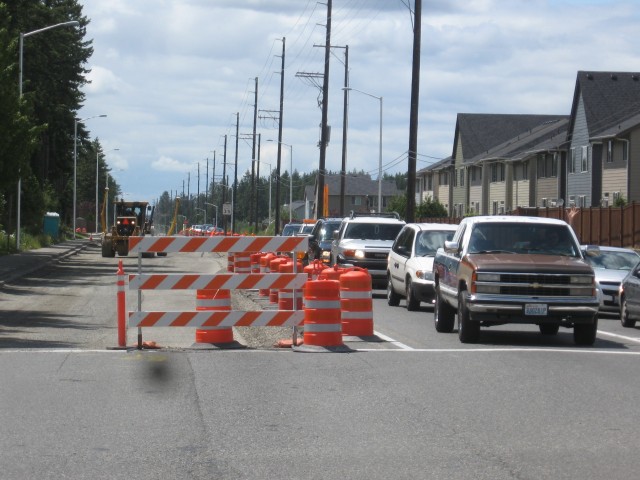 Chavez also said that all the work that is being performed currently should be nearing completion next summer, with only minor details being addressed in the fall of 2012.

As the crews finish up this section of 176th, they’ll be heading westward and begin on the expansion of 176th St from Waller Rd to 14th Ave.  Work in the new areas is expected to begin by mid-summer, 2012.

Funding for all these projects has been generated by property taxes, real estate excise taxes, capital construction grants from the state, and municipal bonds.

When complete, 176th St, the primary east-west traffic corridor in south Pierce County, will be five lanes wide and be replete with new sidewalks, street lights and traffic signals.  Eventually, it is expected to connect with the Cross-Base Highway, and ultimately, Interstate-5.

For more information, click on our ad in the right-hand column.  Thanks!