Fireworks are a large part of the July 4th tradition, and retail stands have spouted seemingly on every street corner, selling their wares to eager enthusiasts who delight is celebrating the Fourth of July with boom and blast.

For some enterprising folks, though, it is a way to make a bundle of cash in a short period of time – all the more welcomed in these tough economic times.

But for others it is a way to raise monies for a good cause, and the Mountain News has had the opportunity to visit with two local organizations and hear about their goals.

One group is the ever-industrious Friends of Stan and Joan Cross Park (FSJCP).  This Frederickson crew obtained a fireworks stand from a local wholesaler, Thunder Fireworks, which is also based in Frederickson.  Wholesalers like Thunder, which imports the ubiquitous Black Cat brand of fireworks, provide the trailer or stand, all merchandise, and the location.

Despite the Frederickson connection, though, the Friends received a spot from Thunder was in Lakewood, at the intersection of 84th and South Tacoma Way.  Nevertheless, the corner might produce huge sales as it is adjacent to the popular Skylight Drive-In Theater Flea Market.

Big sales are what the FSJCP is looking for, as it has an 80-20 spilt agreement with Thunder.  This is the first venture into selling fireworks for the FSJCP, and all those staffing the trailer are volunteers.  Profits will go towards procuring matching funds from corporate donors and the Pierce County Department of Parks and Recreation to build the restrooms and parking lot facilities at the Park, which is located on Military Rd, just west of Canyon Rd, and is the only public park in Frederickson.

Also selling that elusive combination of ‘safe fun with fireworks’ is Rich Arnold and his family.  Arnold is the pastor of the Graham Evangelical Covenant Church, and their stand is on Meridian, just north of town at 152nd St and immediately adjacent to the “Cool Beans” espresso shop.

However, the fireworks stand is a family operation and not formally sponsor by the Graham Covenant.  Nevertheless, the purpose of the fireworks sales is religious – to raise the funds necessary to send one of Pastor Rich’s kids, Nadine Arnold, 18, and a recent graduate from Emerald Ridge, to a year-long teen ministry in Texas called, “Teen Mania.” 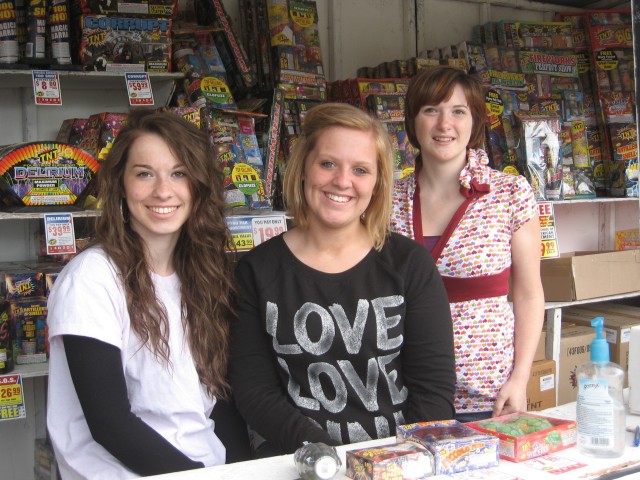 Although she could draw from the ranks of her seven brothers and sister for sales staff, Nadine also recruited friends from Facebook, giving her about 20 kids to help her sell fireworks through July 5th, from 9 am until 9 pm.

Supervised by Pastor Rich, the kids seemed to be pulling two-hour shifts to deal, first, with the cold and rain and then the sunshine and heat, along with long stretches of boredom.  The family has an RV trailer parked nearby for breaks and nighttime security; and the family homestead is just a few blocks away as well.

“Sales have been slow,” Nadine announced on Thursday afternoon.  Fireworks sales were authorized to begin on Tuesday, June 28th at noon, but Pastor Rich expected that 80% of their sales would come on July 3rd and 4th.

As for Teen Mania, Nadine, aka “Zooie” to family and friends, is very excited about her approaching adventure inTexas, which will start in late August.

“It’s an honor academy that has about 500 teen interns,” she said.

In addition, Nadine will be attending theological and biblical classes, receiving leadership training, and earning up to 26 college credits.

In the meantime, some of Nadine’s crew fortunately has had prior fireworks selling experience.  Renita Hemple, a friend from Orting, has sold fireworks for years as part of the fundraising effort of her family’s church.

“Lots of churches sell fireworks,” said Renita.  The River’s Edge Church takes all their profits and uses them to fund the kid’s programs all year long.”

Even with some selling experience, Pastor Rich seized several teaching opportunities to instruct his young staff in advanced marketing techniques, such as how to be active and helpful with a customer, but not too pushy or intrusive – or too passive.

Along those lines, the crew at the Frederickson shop – all retirees – also had a learning curve, but theirs was more generational – getting the blankety-blank electronic devices to work properly, such as the bar code scanner, the cash register and the credit card swipe machine.

The Frederickson crew also planned to seize the marketing opportunity of promoting their efforts to build Cross Park by erecting banner and signage.

Perhaps unable to match the grand scale of purpose announced by the Frederickson crew, the Arnold’s stand donned the moniker “The Fully-Clothed Fireworks Stand” because it was directly opposite the Goth-looking “Nearly Naked” fireworks outpost on the southeast corner of 152nd St.

The “Fully-Clothed” sell TNT brand fireworks and are operating under the auspices of American Promotional Events, Inc.

Pastor Rich said that certain fireworks are banned in Pierce County, such as bottle rockets, firecrackers, and large explosive devices like M-80s.

In addition, Pastor Rich said that selling and igniting fireworks is illegal in Tacoma and other incorporated areas of the county, but is allowed in unincorporated areas, such as South Hill, Graham and Frederickson.

In that light, the Arnolds have a whole line of legal fireworks, such as fountains, sparklers and Roman candles.

“Those are the biggest sellers,” said Renita confidently.

In addition, the Arnold’s stand is having a fireworks promotion, where they will hold a raffle on Sunday, July 3 at 5 pm and give away a giant combo package of fireworks worth $200.  All customers who buy fireworks at the Arnold’s stand are eligible if they fill out a contest form at the stand at the time of purchase. 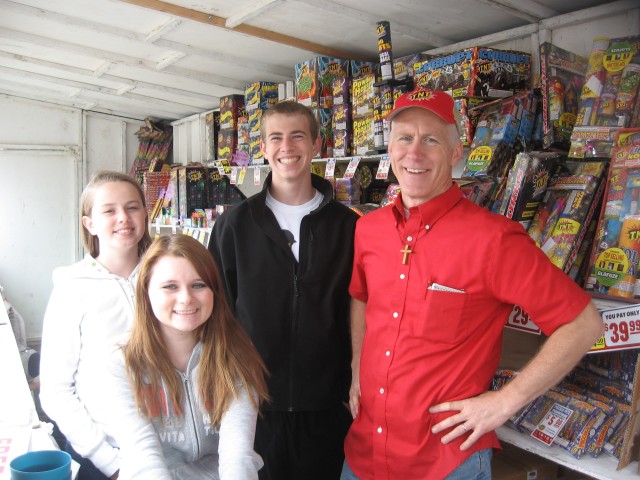 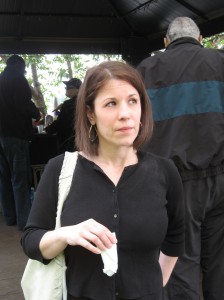 Click on our ad in the right-hand column for more information.  Thanks!