The new Spanaway Elementary School on Pacific Avenue currently under construction will have a unique feature – a state-of-the-art horticultural classroom and greenhouse that will support an innovative gardening curriculum for all students, K-6.

Master Gardener and Vietnam Vet, Larry Owens is ready for the children of Spanaway Elementary School.

Although the greenhouse and other horticultural structures will be new, the gardening program at Spanaway El has been underway for several years, and since 2008 has been guided by Mr. Owens.  Currently, there are about twenty, four-by-four-foot raised beds that students use alongside the old portables on the eastern portion of the campus.  Under the watchful eye of Mr. Owens and their teachers, students grow a wide range of vegetables suitable to our climate, such as snap peas, onions, strawberries, kale, carrots, broccoli, and cabbage.

The area also has a compost bin and several worm boxes that transform food scraps into rich, composted soil for the garden beds. 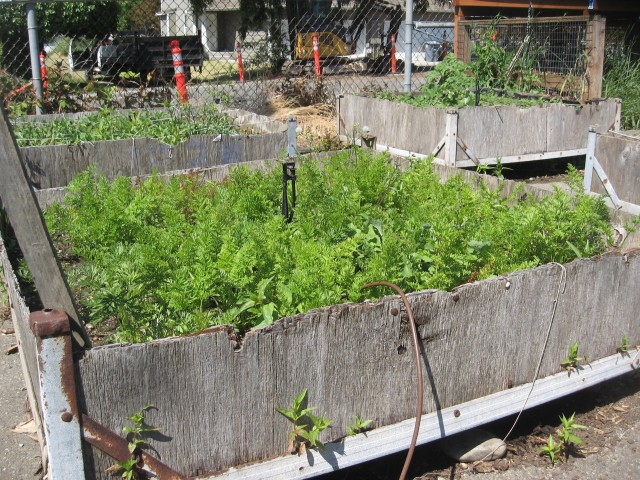 Fortunately, a Spanaway El teacher and her husband volunteered to install an automatic drip irrigation system in this “upper garden” area, so this summer the crops are growing nicely, and not suffering from a lack of water or neglect.

In the gardening program students learn a vast stream of integrated lessons, certainly the basics of growing vegetables and the principles of biology.  However, the learning penetrates more deeply, touching on subjects such as what a seed is, the life cycle of plants, and the interdependence of sun, soil, water and air, and does so in an often-impromptu, hands-on fashion.

“The students learn so many important things in the gardening program, even math,” said Larry with a laugh, “like, ‘What’s an inch?’  Well, here, they learn right away how to measure things and what an inch actually looks like.”

Larry continued:  “They also learn about nutrition, and the mineral content of soil – what bodies need to stay healthy and strong, and how they get it through their food,” Owens said.

These kinds of lessons are even more impactful because many students have significant social and health challenges stemming from their family’s impoverishment.

“I have students who don’t know where they’ll be sleeping tonight – or tomorrow night,” Owens said.  “I even have some students who just live in their family’s car.  That kind of life makes it tough to learn.  Where do they do their homework?  …It can be heart-breaking.”

Addressing these basic questions of life is part of Mr. Owens’ program, even if in an introductory and modest way, and many of the older students are given the supplies to build garden boxes at home or on a spot of land donated by a neighbor or church.

Under the auspices of their gardening program, the Spanaway El was able to procure a $45,000 state grant from the “Learn and Serve” program that gave them the funds to build garden boxes in the community.  In addition, Spanaway El students were able to tour local horticultural centers, such as the noted Worm Farm in Yelm, and the Environmental Services facilities at Pierce College in Steilacoom.

As part of Learn and Serve, the Spanaway students, particularly the student leaders in the 6th grade, reach out to others and share what they learned on their field trips and in the gardening program at school.

“That’s part of the Learn and Serve Program – to give back to the community,” said Larry.  “These kids even get the experience of sharing their lessons with adults.”

Further, the older students mentor younger students in the classroom or at home at work in their residential gardens.

As for age and grade, lesson plans are tailored to the abilities of the children.  Some students have individualized projects, while the younger grades have more group-oriented sessions.

“Every student keeps a journal of their experiences in the gardening program,” said Larry.  “This is an integrated curriculum.”

“The second graders just record what the soil feels like, and what they see in the garden – the bugs, the plants that are growing – what they smell like, what the fruit tastes like – that kind of thing,” said Larry.

Larry stands beside a pea tripod filled with snap peas raised by the students of the Spanaway El.

Every student at Spanaway El spends some time in the gardening program, but it seems the older kids get to do much of the planting – and also most of the weeding.

Nevertheless, the gardening program can also be life-altering, as the experience confronts entrenched, but limiting, attitudes.

“One student wasn’t participating fully, and I asked her why,” said Larry.  “She told me that her mother wouldn’t let her play in the dirt, so I told her, ‘Honey, we don’t work in dirt, we work in soil,’ and within five minutes she was up to her elbows planting stuff, playing with the worms and having a great time.”

But the gardening program delivers what Owens believes the students and their parents really want in an education.

“I hear so many parents say over and over, ‘We want our students to learn more than just what’s in a textbook,’” Larry said, “and that’s what we teach their children in our gardening program.”

To that end, Larry has a lot of help.  A committee of twelve administrators and faculty from the Spanaway staff currently help guide the gardening program, and the new horticultural classroom will also have an expanded curriculum, which committee members will develop.

“Our goal is to turn the new gardening curriculum into a solid educational opportunity,” Owens said. 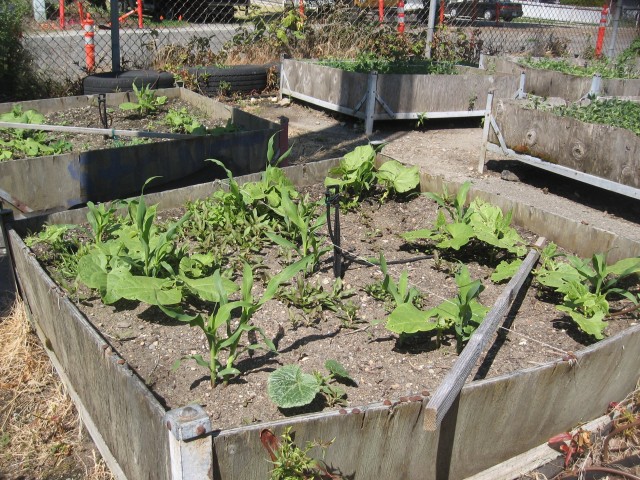 This garden box is filled with the "Three Sisters" of squash, corn and beans and reveals the food production practices of indigenous cultures such as American Indians, and is part of a joint project between the gardening groups and social studies teachers.

He also announced that he is getting substantive support from the Bethel School District.

“The superintendent’s with us, and so is the school board,” Larry declared.  “Board members Brenda Rogers and Joy Cook are big supporters.”

Along those lines, other BSD schools are endeavoring to launch some kind of gardening project.

“Kapowsin Elementary wants to develop a garden and fruit tree program,” said Larry, “But that’s going to require someone to take on that project – it’s going to be a lot of work.”

In addition, Naches Trail Elementary School has a fledgling gardening program under the guidance of an intern volunteer from the state Master Gardeners’ program.

However, Spanaway Junior High has no horticultural program at present, and as a result, much of what Mr. Owens and his crew teach is not sustained once the Spanaway Elementary or Naches Trail students head to junior high.

“So, we’re going to be closely watched by the BSD, to see how this kind of curriculum can be implemented elsewhere,” Larry said.

The difficulties will be in the details – who will do the teaching, how will they be educated in the nuances of gardening and helping youngsters say active and involved, and how will the gardens be maintained, especially in the summer?

Nevertheless, the BSD effort has the full support of the Master Gardeners of Washington State.

“They want us to thrive, and there’s so much more that can be done once we get this off the ground,” said Larry.  “Raising bees, teaching seed saving, and raising flowers.”

As for the specifics, here is what the new horticultural classroom and greenhouse will look like when it opens in September, 2011.

The classroom building will be built as a functioning greenhouse, about 40-foot by 50-foot.  It’ll be free-standing and separate from the rest of the school buildings, and will be located at the northwest corner of the new campus.  To enter, students will pass beneath a lofty masonry archway.

The foundation of the horticultural classroom and greenhouse has just been laid. Construction of the new Spanaway Elementary can been seen in background.

Inside, raised beds totaling about 15-foot by 25-foot will ring the inside perimeter, and a cistern collecting rain from the roof will be centrally placed within the greenhouse.  Students in groups of 20 or so will be able to work at the garden beds, or receive instruction while sitting on benches that encircle the growing area.

The classroom will not be heated by customary means, but will utilize the warmth of solar energy passing through the clear greenhouse roof, and ambient heat from the gardens.

“All we’re getting (from the builders) is the shell and the ventilation equipment.  You have to remember that a properly maintained greenhouse can be eighty-five degrees in February,” said Larry with a chuckle.

The status of the current “upper” garden has not been decided, but Owens hopes that the area will be maintained for gardening space.

In addition, Owens envisions his school’s gardening complex to be the catalyst for a sizeable community garden in Spanaway.

“Already the food banks here tell us they would love to see community gardens built so that they could receive fresh produce, and also have the gardens be a place where recipients could work a few hours a week and give back to the community,” Larry said.

The community is already becoming involved in the Spanaway El project, as instructors from Seattle Tilth are traveling to Spanaway to give workshops to the faculty.  In addition, leaders of Pierce County 4-H are helping in curriculum design.

Nevertheless, the Spanaway Elementary horticulture project needs the constant presence of a seasoned pro, answering the many questions that arise during construction and the planting, watering and tilling that accompany developing a new garden space.

In addition, his “Number One Assistant,” just-retired Spanaway El teacher Connie Crawford, will be returning to help Larry and his students and staff.

“We’ll have a good crew,” Larry declared.  “We’re going to try to do it right….This is an exciting time for the Bethel School District.”

Below is a site plan for the garden and greenhouse, courtesy of the Bethel Schol District: 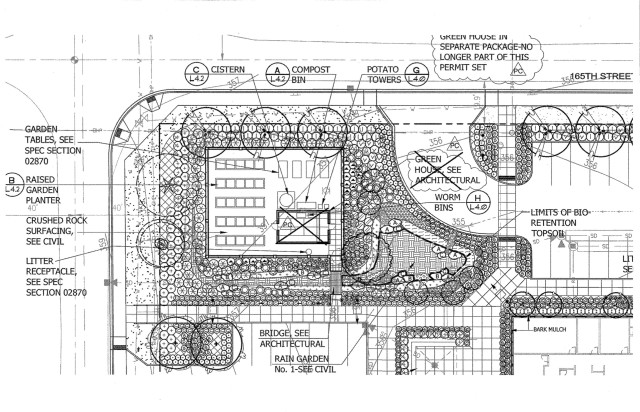 This entry was posted in Bethel News, Culture, Environment, Self Reliance, Spanaway. Bookmark the permalink.