Under gorgeous summer skies, the 3rd Annual Eatonville Garden Tour displayed some of the finest flower, vegetable and landscaping gardens in the Pacific Northwest, with visitors coming from as far away as Tacoma, Lake Tapps and Olympia.

Despite a modest advertising outreach and a past history of cold temperatures and rain, dozens of garden lovers revealed in this year’s Eatonville Tour.

“It’s been a great day,” said Nancy Stevenson of Olympia while touring the Stringtown Winery and Lavender Farm.  “We had a picnic, drank some wine, and picked flowers on a beautiful afternoon.”

Nancy Stevenson with her bunches of lavender, at Stringtown Farms.

Stringtown Farm, one of the most notable spots on the Tour due to the visiblity of its vineyards on the Eatonville Cut-Off Rd, was busy all day with Tour folks and independent visitors.

“We have been so busy that I haven’t been able to put the white wine back on ice since 10:30 am  this morning,” said owner John Adams, who was manning the wine-tasting cottage that had a steady throng until closing time at 6 pm. 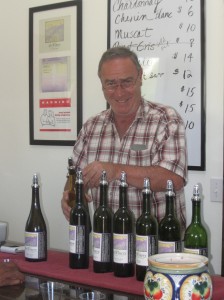 Down the road, Mary and Dave Schactler entertained a slightly different crowd of Tour enthusiasts – folks who wanted to take about food production, large-scale vegetable gardens, and what to do with a summer that is having trouble deciding to stay longer than a day or two.

The Schactlers’ place on Campbell Rd is also known as the Eatonville Nursery, and has several elements that attracted Touristas.  Its upper six acres has been a large-scale nursery producing commercial landscaping since 1984.  As such, it specializes in growing shrubs and plants needed to complete residential and industrial construction projects.

However, in their lower valley, the Schactlers are growing a variety of berries and rhubarb for commercial sale.

As for managing a commercial nursery in a tough economy, Dave is resolute.

“We haven’t been setting any records for financial income the past few years,” Dave said, “but we’re still in business and not everybody in the construction industry can say that.”

Supporting the Schactler’s landscaping operation are four large “cold frame” hoop houses that look like giant greenhouses but lack heat and ventilation, and are protective environments for new seedlings and young shoots. 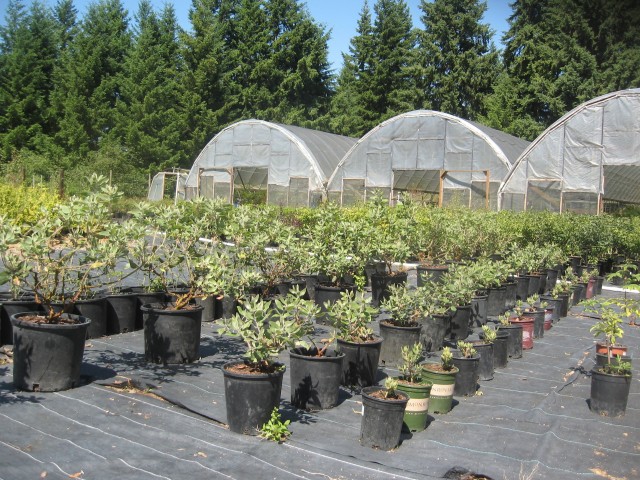 “We do most of our own propagation and start many of our plants from the seeds we collect,” said Dave.

Down below the main nursery area are three huge greenhouses that nurture these plants through their earlier stages, and their fans and cooling systems were working at full capacity during the summer sunshine.

“We’ll use 20,000 gallons of water on a day like today to irrigate our plants,” said Dave.

Closer to their spacious farmstead, the Schactler’s have a large family vegetable garden growing a variety of produce, ranging from corn to peas.  In addition, a number of orchards are peppered across their many acres.

Dave and Mary Schactler of Eatonville Nursery, standing next to their family vegetable and flower garden.

Although the Eatonville Nursery is a wholesale facility, those wishing to purchase at a retail level can do so by calling ahead and making an appointment at (360) 832-4345.

On the other side of the continuum, visitors to the “Founding Family Antiques” were treated to luscious broad-leafed trees along the entrance drive, and sculpted, shrubbery-lined walkways around the home.  When tour folks tired of greenery they could browse the spacious rooms of the Van Eatons’ antique shops located adjacent to the majestic family home on Lynch Creek Road.

Nearby was a double-display of suburban finery.  First, the home of Bob and Gail Schaub on Cessna Drive featured a creative backyard flower and vegetable garden replete with a modern greenhouse and a Koi pond.  Most notably, the large garden space reflected an enormous investment of time and money, and demonstrated the Schuabs’ vision for a holistic, precisely manicured, integrated garden that complimented its up-scale suburban neighborhood.  As proof of their grandparents’ success, Lauren, Cameron and Taylor Schaub were seen during the Tour munching on the deliciously ripe salmon berries and raspberries.

The Schaubs also presented another aspect to the garden tour by hosting a plant sale to provide a measure of financial support to the Eatonville Family Services (EFS), an umbrella organization that provides a variety of community services to low-income residents, such as a food and clothing bank, senior lunches, respite care for patients receiving in-home care, and financial assistance with utility bills.

“We also have a ‘Back Pack’ program where we fill knapsacks every Friday for about forty Eatonville students who need food over the weekend,” chimed Donna and Margaret, two EFS Board Members managing the outreach booth.

Next-door, Mike and Shari Schaub, son and daughter-in-law of Bob and Gail, displayed their very functional low-maintenance but pristine garden of ornamental landscaping.  Wide lawns were framed by spacious trees and shrubbery that presented unique and colorful shapes and textures. 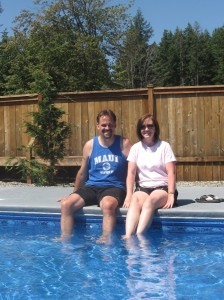 However, the Mountain News found them in one of their favorite spots – lounging poolside.

“We just filled it yesterday, but it’ll get up to ninety degrees in a couple of days with this kind of sun and the solar cover,” said Mike Schaub.

Of note, the young Schaubs built their own pool, as they did for most of their house and landscape, and the pool is filled with a salt-water solution that is healthier for the skin than chlorine.

“It has about one-third the salinity of the ocean,” Mike declared.

Also supporting a community goodwill project was Richard and Marlayne Elliff, whose home and garden lend a splash of grandeur to Orchard Ave, in town.  There, members of the Childrens’ Orthopedic Guild were selling plants and collecting donations that will help fund programs at Mary Bridge Children’s Hospital in Tacoma.

Marlayne told her visitors that the Guild was started by Dr A.W. Bridge, Eatonville’s first doctor.

“He raised a significant amount of funds to help start the Mary Bridge Hospital, and in recognition it’s named after his mother.”

Marlayne, a teacher at Frontier Junior High School in Graham, who, along with her husband, has been working on their splendid flower garden for the past nine years. Marlayne proudly described it as an “English Garden,” characterized by its multiple levels and crowded confines – provided by the lush growth of over 200 varieties.

Sculpted tree-forms, known as "topiaries" are new additions this year at Marlayne and Richard Elliff's garden.

“Something is in bloom every month of the years, except December,” Marlayne said.

Again, the vast amount of work and money invested in their garden is keenly evident.

“We had a vision and we did it in layers,” Marlayne said, and photos she displayed of the ‘before and after’ were remarkable.

Such intimate, hands-on knowledge of her land and flora reflected in her interactions with guests on the Tour.

“Marlayne is so incredibly open and helpful,” said Tourista Betsy Reid from Lake Tapps.  “She told us so much about the details of how she grew her flowers – where to buy them, fertilizers to use, how to keep them healthy – she’s just amazing.” 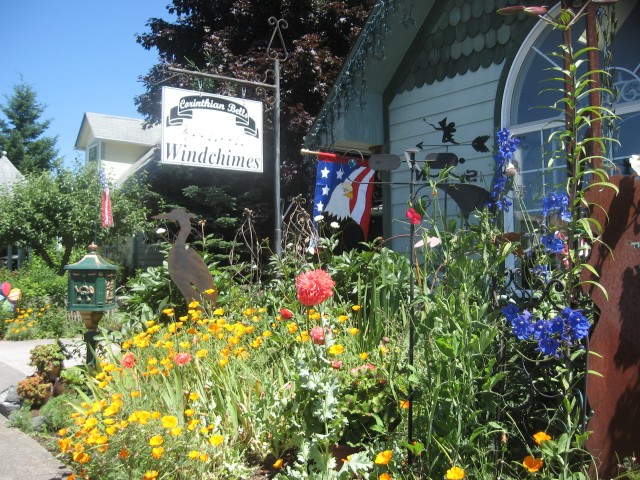 A profusion of colors greet vistors to the Holly Hut, located on the main thoroughfare in Eatonville.

Lastly, Nancy Iams of the enchanting Holly Hut on Washington Avenue, showed a fine concoction of local plants – all arranged in a charming manner that fully complimented her gift and finery shop.

Speaking of her Rhodies and other colorful flora of the Pacific Northwest, all framed by a righteous view of Mount Rainier in the background, Nancy spoke as a no-nonsense businesswoman:

“It’s evolved over time, but it’s survival of the fittest out here,” she declared.  “If it looks like it’s not going to survive, I yank it right out – learned that from my mother!”

Nancy Iams and her grand-daughter Sarah pose beneath Mount Rainier in the backyard garden of the Holly Hut.

However, she also has a delightful little water ‘feature’ that is composed of rocks Nancy and waterfall designer Lonny Heaton found at the Lynch Creek quarry.

“We found concave rocks that would really amplify the sound of the water,” said Nancy.  “I think it does nicely.”

Tour co-director Louise Carson said that the Garden Tour clearly met all of her committee’s expectations, and that proceeds from the event will help fund Eatonville’s Mountain Community Cooperative. 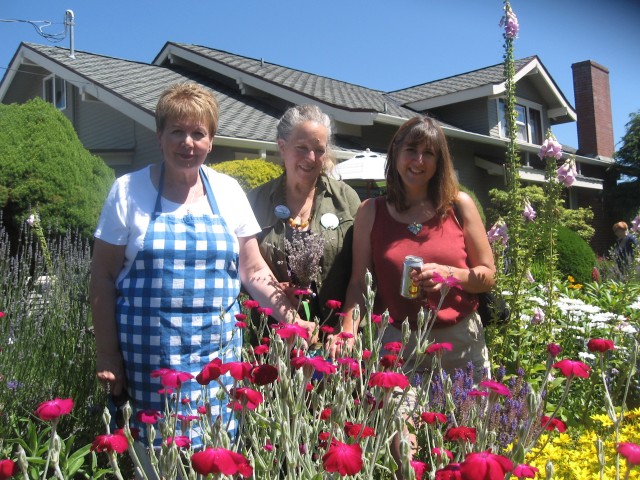 To check on our latests sales and to get coupons – click on our ad in the right-hand column and go to our web site.  Thanks!