Reflecting the imagination and grit of the Frederickson-Clover Creek Community Council to create a free, fun-filled day for local families when circumstances dictate otherwise, the 1st Annual Freddie Fest will be held this Saturday at the Le May Refuse headquarters on 192nd St.

Freddie Fest is actually a replacement event to cover the loss of the popular annual Freddie Fun Run down 176th St, but which is impossible to host this year do to the absence of the bridge over the railroad tracks west of Canyon Rd and extensive road construction seemingly everywhere else.

As with most events graced by the labors of the F-CCCC – and the hands of the woman organizing this festival, Shannon Scacciotti – Freddie Fest promises to be a whimsical, inventive and joyful festival that will further strengthen Frederickson’s identity beyond the town’s image of acres of warehouses and a Boeing plant, and to embrace the notion that 150 small businesses also reside in Freddie Town along with its warm-hearted residents.

A grand undertaking, Freddie Fest is replete with live music, Bounce Houses, and not only an invitational vintage car show with selections from the Le May collection – but also a chance to smash a vehicle at the Wreck-A-Wreck fundraiser at $1 a swing.

However, the highlight of the fete will be the “Corporate Chili Cook-off,” which was a big hit at last year’s Fun Run.  Featuring local businesses striving to win top honors in traditional or alternative chili cooking, this year will also include specialty teams from the culinary arts program of the Boys and Girls Club program at Spanaway Lake High School, and also last year’s surprise winner, the Pierce County Auditor’s Office BBQ team.

At about 1 pm, the public will be invited to sample the tasty offerings in a People’s Choice award category.  However, the contestants will also compete before a panel of celebrity judges composed of Bethel School District Superintendent Tom Seigel, the Tacoma News Tribunes’ columnist Kathleen Merryman, Pierce County Prosecutor Mark Lindquist, and Pierce County Sheriff’s spokesperson, Detective Ed Troyer. 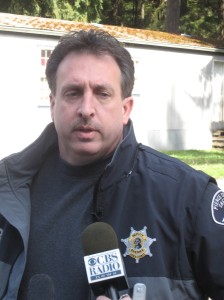 Det. Ed Troyer in his "day job" as PCSD spokesperson at a recent crime scene.

“It’ll be a day-long celebration of all that’s good in Frederickson – the businesses, the schools, and local service organizations,” F-CCCC president Amy Pivetta Hoffman told the Mountain News. “There’s a lot going on.  They’ll be something for everyone.”

Other activities include a presentation by the Central Pierce Fire and Rescue Department and its superb Emergency Extraction Team, which will descend upon the smashed car and give a demonstration of the famed “Jaws of Life” along with other techniques to remove folks trapped from inside a wrecked vehicle.

Also, the Pierce County Humane Society will be at Freddie Fest with dog and cats for adoption, and even possibly other pets such as rabbits.  Further, for a ten dollar fee the PCHS will give your animal a rabies vaccination, and for another $25 will implant a microchip identity tag under your pet’s skin.

The Pierce County Library System’s Bookmobile will also be there, offering books and DVDs, and also describing its many public events that are occuring at local libraries with increasing frequency.

The extraction teeam of the Central Pierce Fire and Rescue Department prepare their gear at a recent demonstration of the "Jaws of Life."

As for the music, Graham resident and Nashville recording artist Jonathan Harris will be performing at 10:30 am, and the Bethel School District will showcase some of its highly accomplished jazz bands in the afternoon.  A DJ will also be on hand to provide more musical entertainment.

In addition, there will be food vendors, and also a collection station for donations to local food banks.

In Graham and Spanaway

This entry was posted in Business, Culture, Entertainment, Events, Frederickson. Bookmark the permalink.

4 Responses to Freddie Fest coming to Frederickson this Saturday, Oct 1