As the hard frosts of fall come roaring into south Pierce County, area residents are also basking in the glow of a cornucopia of art festivals, wine tastings and crafts fairs this weekend.

To begin, the annual Pierce County Open Studio Tour will have 6 of its 18 featured artists hailing from Eatonville.  Notables such as David Craig, located on the town’s main thoroughfare, will have his Native American “Four Winds Studio and Art Gallery open for inspection, and Mr. Craig – like all the artists on the Tour – will be available to answer questions and discuss his work and creative process.

Next door in the Holly Hut, photographer Ron Warfield will be setting up his mobile studio in owner Nancy Iams living room.  The Hut is part of Nancy’s sprawling Victorian home and several of its rooms offer a range of unique crafts, clothing and finery.

“I guess I’m really going to have to clean the house good this week and get ready for Ron,” Nancy told the Mountain News this week in anticipation of the art tour.

In addition, Ms Iams is also orchestrating the Eatonville Cottage Merchants’ Open House, which is dove-tailing with the art tour.  Over twenty of Eatonville’s shops will offer cookies, snacks and hot beverages to shoppers who want to wander throughout town and sample the wonders that our shop-keepers have to offer.  Although many of the shops will have extended hours, the focus of the festivities will be on Saturday.

It’s going to be a fun day,” said Nancy.  “It’ll be like a ‘shop-hop’ and each of the cottage merchants will have a door prize to give away, too.”

As part of this effort, many shops associated with the artistic culture of Eatonville will be participating, such as Founding Family Antiques, The Wood Box, and David Wuller’s Fine Woodworking.  In addition, the Country Mouse Quilters Shop will also be joining in the celebration. 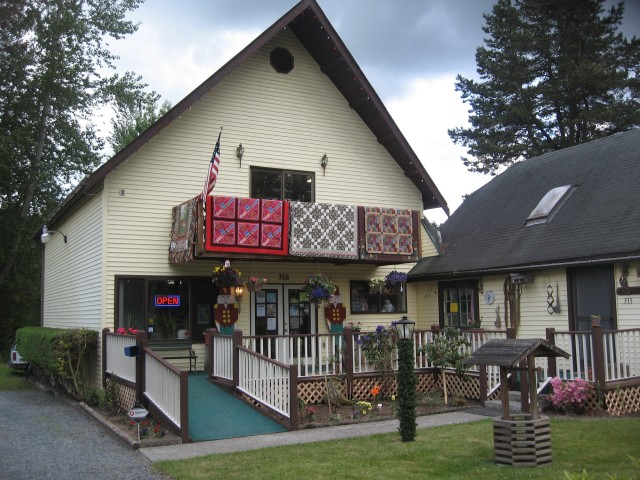 Central to the action is the Mountain Community Co-op, which is always a hub for tasty organic edibles and great conversation – and this weekend the Co-op is an absolute linch pin to another event – the 35th Annual Mountain Country Bazaar hosted by the A.W. Bridge Orthopedic Guild.  This large and varied crafts bazaar will be held this year in the Methodist Church on Mashel Ave, right next door to the Co-op.

“This is our big fundraiser for the Mary Bridge Children’s Hospital,” said organizer Karen Swanson.  “We’ll have a variety of crafts – and it’s all home-made.”

The range of crafts that Swanson described was truly staggering.  Over fifty vendors – almost all local – will be offering items ranging from pottery and jewelry, to hand-blown glass sculptures and wood crafts.  In addition, there will be a full display of lavender products from the fields and workshops of Springtown Farms and Winery.

Some of the highlights of the crafts bazaar will be oddities such as plastic-net “scrubbies” that are bundles of old netting tied together to form an ideal pad for a soft scrub in the kitchen, such as removing dirt from vegetables or grease from so-called no-stick frying pans that have a delicate coating of Teflon.

“My husband just loves his ‘scrubbie’ for cleaning up his potatoes,” Karen said, adding that the vendor who sells the scrubbies marketed over 200 of them last year.

There will also be a plethora of knitted clothing and similar crafts fashioned from cloth, wool and other materials.

“We’ll have plenty of scarves, aprons, placemats and other crafts of this type,” said Karen.

One item that the Bazaar will not have is baked goods, as Ms. Swanson indicated that she relishes avoiding the hassles of dealing with the Pierce County health department.

Many of the art studios and most of the cottage merchants are located in town, but many are scattered across the fringes of Eatonville.  North of town are the intriguing offerings at the St Clair Studio and Garden, not far from Northwest Trek.  Karen St. Clair’s stylized pastoral paintings are sublime and the jewelry of her associate, Allison Prouty, appears to be enchanting and complex.

Not far away on Webster Rd is the HGH Photography studio of Steve and Debbie Holliday, whose tastes run to the equestrian and woodsman.  To the northwest near Graham another open studio belongs to Peggy Moore, an accomplished watercolorist.  Her blogspot, http://peggymooreart.blogspot.com/ reveals her to be an exceptional artist – able to render simple, precise pastorals along with evocative and modernistic portraits.

In the other direction – Ashford, to be exact – will be having its 2nd Annual Fall Wine Festival and Dance on Saturday and hosted by the Mt Rainier Visitors’ Association.

The festivities will begin at 2 pm at the Lions Hall, located on the main road leading to Mt. Rainier just before you enter the village of Ashford.

Several local vintners will be featured, including the always winning samplings of the Scatter Creek Winery of Tenino.  Owners Terril and Andrea Keary have been producing quality wines in their garage in Tenino since 2005, and have offered them to rave reviews at numerous local wine fetes, such as the touted Blues and Brew festival in Mineral.

Terril’s passion for quality wines is inspiring and so is his story – his day job is being a correctional officer for the state, and his humble facilities belie his fantastic wines – after all, it’s the grapes and the soil they grown in that is most important, and Terril and Andrea have perfected the process of selecting premium fruit from the best vineyards in the Yakima Valley.

Other vintners in Ashford include Wells Winery from Onalaska; the popular 21 Cellars from Tacoma; and the Flying Dreams Winery from Woodinville.  In addition, Agate Creek Winery from Chehalis will be offerings its wares, as will the Madsen Family Cellars from Olympia.

Of note, Agate specializes in full-bodied reds, while the Wells Winery touts its use of naturally grown fruits and berries for its wine, along with using raw organic sugars and abstaining from adding sulfites.

After an afternoon of tippling the vino, festivarians will be treated to the music of Swing Soiree at 6 pm, and then they’ll close out the evening with The Elbow Country Rough Riders.

Commenting on the happenings swirling about Eatonville this weekend, Margaret Franich summed-up the events in a sublime manner.

“We’re in the middle of it, aren’t we,” said Margaret.

Cottage Merchants: some Friday night, all-day Saturday, and some Sunday