Profile: Eldora Sloan and her Readers are Succeeders program

The bell rang and school was out at Graham Elementary when I recently visited Portable 5 to check on the progress of the Readers Are Succeeders after-school program, conducted by Eldora Sloan and a number of enthusiastic volunteers.

When it started a couple years ago, there were only about five children in the program, but today, Readers Are Succeeders is thriving!  As they poured into the portable, thirteen energetic, vivacious children quickly paired up with volunteers to read.

On each table, cardboard “privacy screens” were erected to minimize distractions.  The kids squirmed and wiggled, and then settled down to read.  Their voices hummed as they read out loud to volunteers, who gave them their complete attention.

Each child read from books of his or her own interests and ability.  They sounded-out unfamiliar words, rolling them over and around their tongues like sweet morsels.  Their efforts were rewarded with constant cheer and encouragement.

At most tables, instruction was given one-on-one, which is the perfect situation.  But at one table, there were four children.

Reading alternated between the children and the adults who mentored them on how to read with drama and color, and who coaxed their charges to grow in skill.  A little girl with dancing blue eyes walked up to me politely and asked, “Do I know you?”

“Hello, Breezy,” I replied.  “How wonderful to see you here.”

“I thought you were from my neighborhood,” she said, beaming. 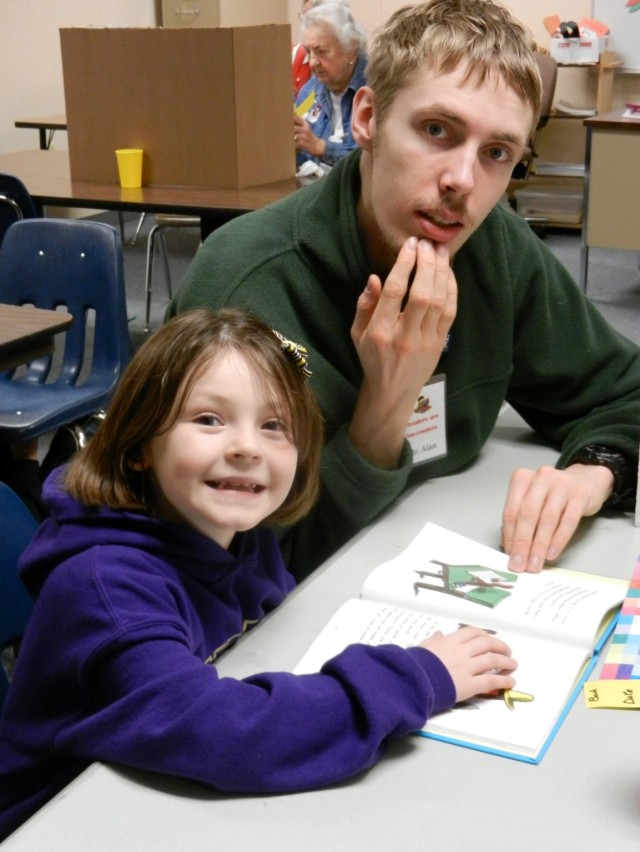 Breezy Brisbin with Alan Agnew at Readers are Succeeders in Graham

Minutes later, another girl with long, brown hair and a pink, checked jacket walked briskly past the counter where I was standing.  “I’m through with my first book,” she announced as she began to search the stacks for a new one to read.

I had left the Readers Are Succeeders program at the end of the last school year to write a book of memoirs on my childhood experiences growing up on a farm in Enumclaw.  The time I spent in the classroom Tuesday threw me back into memories of what it was like growing up, which made me wonder about Eldora Sloan’s childhood years.

“Oh, that was a long time ago,” she chuckled softly.  Having grown up during the Great Depression, she began to recall experiences randomly out of the dusty treasure trove of her memories.

“In the summer, we went to the school yard or community building to play ball with the neighbor kids.  That’s when we lived in Enumclaw.”

To learn that Eldora had also grown up in Enumclaw was a surprise.  It was even more of a “small world” moment when we discovered that her best friend, whom she visited often, lived right next door to the farm where I grew up.

I asked her what was different between growing up then and today.

Eldora explained that she was born in southeast South Dakota, in Mitchell, a town whose primary claim to fame is that it is “The World’s Only Corn Palace.”

Later, I did a Google search on “Mitchell Corn Palace” and was amazed to find that in 1892 the community built a substantial structure for community events that took up nearly a city block.  It was intricately decorated with colored corn, inside and out.  Each year the exterior is stripped down and new murals are created.

“Mitchell was a rural community where most people milked cows,” Eldora continued.  “Ours was called the Pine Grove Dairy where Dad pasteurized the milk and delivered it into town.”

Ms. Sloan commented that they grew corn, oats, barley and alfalfa for hay on nearly a section, or six hundred acres, of land.

“Most families had chores to do and I learned to milk cows when I was only ten-years-old.  I was a tom-boy and loved to work outside.  I cultivated corn and harrowed the ground with two-team horses.  Also, when workers put the clamps into the loose hay from the fields, I drove the horses forward, which pulled the stacks up into the barn to store as feed for winter.  I also fed the chickens, gathered the eggs, and carried water from the well to the animals.  I think kids took work and their responsibility for family life for granted.”

Eldora’s grade school, which was five miles outside of Mitchell, had large windows, and was very nice and well kept.   It was a one-room school house that went through the eighth grade.  Five students were in her class, and one teacher taught all eight grades.

“In the winter, we had lots of snow.  The school had a large heat register we’d all stand on to get warm.  When the snow got deep, Dad brought out the bob sled with skids on it and picked us up from school.  When there were snow storms, the teacher stayed with us in our home.  That was always fun,” she reminisced with fondness.

Considering that it sounded like a picturesque life, I wondered why they left and how they happened to settle in Enumclaw.

“The Dust Bowl came.  Terrible, terrible dust storms blew thick dust all around the doors and windows and everywhere.  It caused our crops to fail, and that’s when we left.”

Her parents, older sister and a friend drove to Washington, saw the country and decided to move here.  That’s how she came to graduate from Enumclaw High School.

“Later, when I was in college, I decided to be a teacher.  But by then the war had ended and the men who’d been off fighting came home.  Women returned to their former roles as wives and moms.”

The desire to teach never left her, though, and the opportunity presented itself again through Sunday School teaching and workshops.

In 1986, she went to “Ministry of Caring Training,” a resource for the Grow by Caring program of the Baptist church.

“I went over a dozen times to Saint Louis for a week’s training and led forty-hour, two weekend events.  It was there that I really experienced the fun and enjoyment of teaching.”

Ms. Eldora, as the children call her, says her current interest in teaching children to read was ignited by a program called, “Break the Chains of Human Trafficking.”

Eldora was among a group of women who raised money to give grants to people here and overseas who were developing programs to keep children out of human trafficking – and to help women at home who’d come out of it.

Human trafficking is modern-day slavery, where around the world and in this country human beings are coerced into unpaid labor in sweatshops, mines, chicken farms and rock quarries.  Women, children – and boys – are also trafficked into sexual exploitations such as pornography and prostitution.

By the end of three years, Eldora’s group had raised about $500,000, and statistics were available to show the importance of their work.

As she spoke, her jaw was set and her eyes glowered.

Her women’s group decided to continue their work of providing grants and to expand the program to include reading programs at a young age that could steer children past a slew of hurdles.

Eldora signed up and volunteered for five years in the reading program at Spanaway Elementary which is called Helping One Student to Succeed, or HOSTS.

There, the reading program is part of the school’s curriculum. 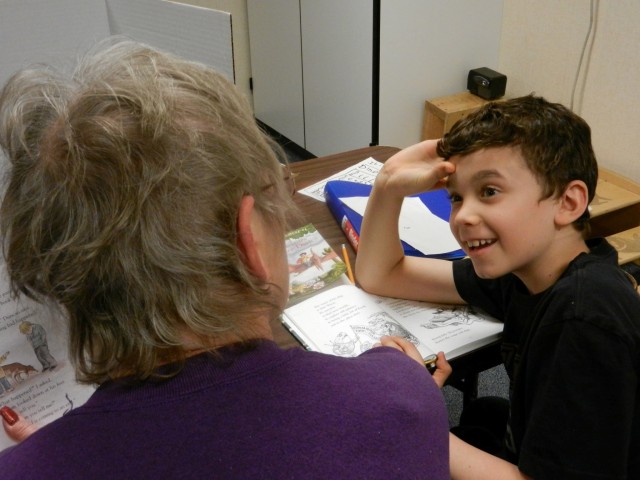 Hayden Stein reading to Karen Murad at the Readers are Succeders program in Graham.

Three years ago, Eldora was inspired to start a similar program in Graham.  She contacted Carol Wright of the Graham-Kapowsin Community Counsel (GKCC) to help her locate a space where she could set it up.  Sloan then wrote and received a grant from the American Baptist Women to launch the Readers Are Succeeders program that meets in Portable 5 every Tuesday at 2:45 p.m.

The youngsters who attend are clearly mastering reading skills and growing in self-esteem.

A couple of days after my visit to the school, my husband and I decided to go for a late afternoon walk.  Two neighbors and a child stood chatting at the corner.

“Excuse me,” said the young man – Mr. Brisbin.  “My daughter, Breezy, tells me that you were at the school during the volunteer reading program the other day.  Is that right?”

I confirmed her report.

“That is the best program,” he said with mounting enthusiasm.  “I got Breezy into it last winter, and you should see how she can read, now!  I can’t believe how well she reads.  Her confidence has just shot way up.  It’s amazing.”

Whatever it takes, every child deserves – and is entitled – to learn to read.  Volunteers in the Readers Are Succeeders program are very clear on this:  When they invest two hours a week to help a child learn how to read better, the trajectory of that child’s entire life could be changing from potential failure to success, from dropping out of school to becoming well-educated. 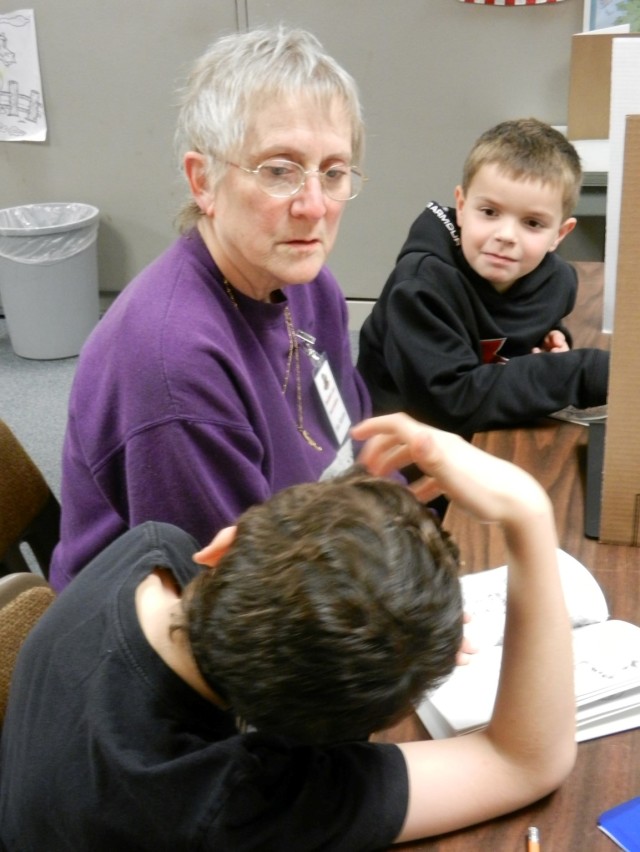 Today, there are many causes deserving of a volunteer’s time, but few have such potential for contributing to the well-being of a child’s life so far into their future.  Volunteers in the Readers Are Succeeders program recognize that fact.

These children need you. 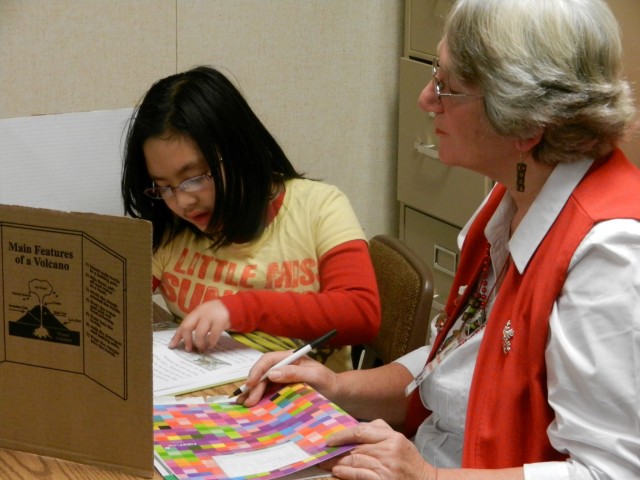 8 Responses to Profile: Eldora Sloan and her Readers are Succeeders program