by George Ochsenfeld, special to the Mountain News

Our industrial civilization is melting down, though we try hard to deny it.  The global financial system teeters toward collapse, enraged citizens are rising up against their governments, and climate change is beginning to wreck havoc.  Most Americans have experienced a drop in income and wealth, good jobs have dwindled, education, healthcare, and retirement are becoming unaffordable, bankruptcies and foreclosures are commonplace, and the social safety net is being dismantled.

Or could the crash of the industrial system give birth to a more sane, sustainable way of life?

The meltdown is the result of fundamental structural defects in the industrial economy that go beyond the immediate crisis triggered by the rampant greed, fraud and irresponsibility on Wall Street and in the financial sector.  Even though it provided a century of prosperity for a fortunate minority, the industrial economy had three fatal flaws:

(1) It required infinite growth in a finite world

(2) Prosperity was dependent on the drawdown of natural capital, such as non-renewable resources like oil

(3) The true cost of doing business was avoided by not paying for waste disposal, i.e. the cleanup of carbon and other pollutants.

Our economic system requires continuous growth – at least 2-3% each year – or it begins to collapse.  At 3% per year, the entire economy – all of our goods and services – must double every 24 years, along with all the resulting pollution and resource depletion.

According to economist Kenneth Boulding, “Anybody who believes exponential growth can go on forever in a finite world is either a madman or an economist.”

Just as a heroin addict can’t keep up with an ever-increasing habit, the ultimate junkie – industrial civilization – faces a nasty withdrawal.

In addition, an endlessly expanding economy requires increasingly expensive bureaucratic, legal, and regulatory structures to maintain order, as well as a constantly growing physical infrastructure, such as roads and bridges, sewage facilities and energy grids, etc., to deliver goods, services and energy.

As archeologist Joseph Tainter explains in The Collapse of Complex Societies, the cost of maintaining these social and physical structures becomes enormous, and eventually results in the collapse of the system.

A case in point: the American Society of Civil Engineers recently reported that we must spend $2.2 trillion in the next five years to prevent disintegration of our infrastructure.

In recent decades, economic growth has been largely driven by bubbles: dot com/high tech, Asian markets, and real estate.  The latest and most desperate attempt to maintain economic growth is massive governmental and personal debt, which now threatens to destroy the entire global economy.

It’s astonishing that the vast majority of economists were blindsided by the 2008 financial meltdown.  Entranced by the ideology of growth, they saw no problem with economic growth driven by inflated real estate prices, bogus mortgages, and complex financial instruments concocted by Wall Street swindlers.

Maverick economists such as Herman Daley, Manfred Max-Neef and David Korten have warned against an economic system which defines success only in terms of increased gross domestic product.  They’ve proposed alternatives, emphasizing sustainability and quality of life over quantity of goods, but are ignored by the great majority of their peers.

A second flaw is that our economic wealth was largely the result of a massive drawdown of resources, especially non-renewable fossil fuels, but also topsoil, fresh water, and rare minerals.  This is like living big by squandering your savings – you may appear rich for a while, but it won’t last.

Cheap oil was the main driver of economic growth and prosperity during the 20th century.  Oil is nearly miraculous.  According to author Bill McKibben, one barrel of oil yields “as much energy as 25,000 hours of human manual labor – more than a decade of human labor per barrel.”

Put a gallon of gas in your car, drive 20 or 30 miles until it runs out, then push your car home.  Gas will seem cheap at $4.00 per gallon, and it is!  In addition, we depend on petroleum for plastics, pharmaceuticals, and food – agribusiness uses 10 calories of fossil fuel to grow, process, and deliver one calorie of food.

Unfortunately, all forms of renewable energy combined, such as wind, solar and thermal, cannot readily replace fossil fuel even if there were massive investments by government and industry, which there won’t be.  As McKibben states in his treatise, Eaarth, the transition to renewables “… won’t happen fast enough to ward off enormous change….certainly not fast enough to preserve the planet we used to live on.”

A third flaw in the industrial economy is that we have never paid the true price of doing business, but instead have externalized costs.  An eternalized cost is one that is not paid at the time of transaction, but is shifted to someone else.  For example, in the case of coal-fired electrical generation plants, the cost of treatment for asthma suffers is not paid directly by the plant owners or those purchasing electricity.

The industrial economy has externalized massive, mind-boggling costs, which have yet to be paid, and arguably, can never be paid.  These include the price of cleaning toxins from the ecosystem and of removing excess greenhouse gases from the atmosphere.  There are also the costs of climate change: droughts, flooding, decreased agricultural productivity, massive relocation of populations, and resource wars.  And of course, the suffering of humans and other life forms from loss of community and habitat, from disease and premature death, and from extinction, cannot be quantified.

If we had been forced from the beginning to pay for cleaning up the mess we were making, we would have seen early on that industrial civilization was an unaffordable, destructive fraud.  Instead, we are now addicted to a way of life that is killing the biosphere and us with it.  Despite the alarming increases in greenhouse gasses, governments, corporations, and most individuals flat out refuse to consider the drastic decrease in “standard of living” needed to prevent catastrophic climate change.

Is there hope?  Perhaps the invisible fists of the market and nature will knock some sense into us.  The best scenario involves a drastic decrease in population, fossil fuel consumption, and pollution over the next two decades, but prior to global warming reaching a fatal tipping point, which would be replete with massive violence, starvation, or the complete disintegration of civil society.

To stave off ecological disaster, NASA climatologist James Hansen advocates making the price of fossil fuels reflect some of the unpaid costs of climate disruption and pollution-related health problems.  A gradually increasing fee on carbon would decrease usage and make renewable energy competitive.  All money collected would be given back to the public, so that by the time gasoline increased by a dollar per gallon because of the carbon fee, every citizen would be receiving $2,000 to $3,000 annually.  Those using the least fossil fuel would come out ahead.

Jim Dipeso, Policy Director of Republicans for the Environment, endorses this approach, saying that it “makes use of market principles, by prodding the market to tell the truth about the costs of carbon-based energy through prices.  It would not impose mandates on consumers or businesses, create new government agencies, or add a penny to Uncle Sam’s coffers.”

Unfortunately, big corporations block the passage of any such legislation, and the public does not raise a ruckus, since many of us would rather burden our grandchildren than reduce our lifestyle.  Or, perhaps more accurately, most Americans remain ignorant of the destructive consequences of our way of life, an ignorance reinforced by the fossil fuel industry’s successful public relations campaign to create doubt about global warming.

Research indicates that caring relationships, community involvement, meaningful work, and spiritual commitment – the building blocks for resilient towns and neighborhoods – are the primary sources of happiness.  Prior to the fragmenting impact of industrialization on family and community, our ancestors lived for thousands of years in tight-knit social systems without airplanes, reality TV or smart phones, and I suspect they were happier than we are.

If we are to survive, we must replace the failing industrial system with a world based on external simplicity and internal abundance.  Wisdom bearers from all ages have taught that joy, serenity, and love lie buried at the core of our being and that through spiritual practice we can dissolve ego-driven patterns of thought and perception, and experience states of consciousness far more satisfying than those produced by external rewards.

Or as Jesus said, the Kingdom of God is within you.

The hour is late.  Too late?

Printed in the Mountain News with the author’s permission. 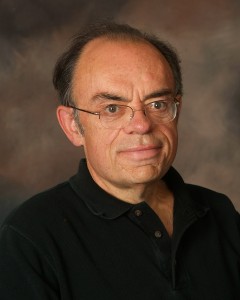 The author, George Ochsenfeld, has a private counseling practice, specializing in addiction.  For 20 years he has been a leader in the fight against a proposed 32-square mile airport just south of Chicago, and he sees this project as driven by greed rather than need; further, he sees this project as a local expression of the economic/industrial juggernaut that is destroying our planet.  In 2010, George ran for Illinois State Representative as a Green Party candidate, and he lives with his wife Maureen on a 10- acre tree farm near Monee, Illinois.  They keep bees, and have been planting trees for 27 years.

The author is also a friend and colleague of Mountain News columnist, Paula Morris, the “Newbie in Graham.”

This entry was posted in Nature, Politics, Self Reliance. Bookmark the permalink.