Below is an article from Mountain News correspondent Josh Magill on the construction of the new Clover Creek Elementary School in Frederickson:

As school winds down and summer begins to take hold of young students, the Bethel School District is preparing for an event – something few students ever get to experience – a new school.

A ground-breaking ceremony for the new Clover Creek Elementary School was held on March 2, 2011 for school staff and students.  Also in attendance were members of the school board, district administration, as well as Pierce County Councilman, Roger Bush.  Within weeks of completing the 2010-2011 school year, the old building quietly and carefully started coming down.  The land was cleared and construction began that summer on a new building.  During the 2011-2012 school year, students and staff were accommodated at other Bethel area schools, but excitement is growing as students will return to Clover Creek this September.

“We are very excited to open a new Clover Creek Elementary,” states Krista Carlson, Bethel School District’s Director of Communications. “The school will be heavily focused on literacy and feature the latest technology.  One unique feature will be a computer lab, opening some after school tech opportunities for the community, as well as after school Spanish class for students and possibly adults.  There is a walking path and field improvements have been made.”

The new campus will have a separate bus loop from the parent drop off area providing a safer and more efficient transition before and after school.  New sidewalks and landscaping will be in place to the north and west, as well as significant improvements to the storm water treatment and storage.

Construction of the new facility is being funded through a combination of Washington state educational funding and voter approved bonds for capital facilities.  The Clover Creek replacement was listed with other construction and remodeling projects on a $175 million dollar bond passed in April of 2006.  Bethel School District receives about fifty percent of the total cost from the state.  Dr. Robert Van Slyke, chief of the BSD Facilities and Construction department, pointed out that capital funds cannot be used for general education  fund purposes, but only for projects outlined in the bond proposition and as approved by the voters.

Construction of the new Clover Creek Elementary School is nearing completion and will be ready by September, 2012.

Dr. Van Slyke says construction is on schedule and the school will open on time.

“The structures are complete, including plumbing, electrical, heating and ventilation.  The roof is finished, along with siding and exterior paint.  On the interior, ceiling grids and ceiling tile are in place, and cabinet work is about ninety-five percent completed.  The gym space will be the last to receive wall finishes and flooring. When weather cooperates, the concrete and asphalt is getting done.”

With housing growth in the area, residents and members of the local Frederickson-Clover Creek Community Council have asked how the building takes eventual student population into account.

“We are building the new Clover Creek significantly larger than the old school,” says Van Slyke.  “This is in response to the projected growth spurred by the housing industry.  Our projections were adjusted for the economic downturn, but the adjusted projections did not change our original concept for the size we would build the school.” 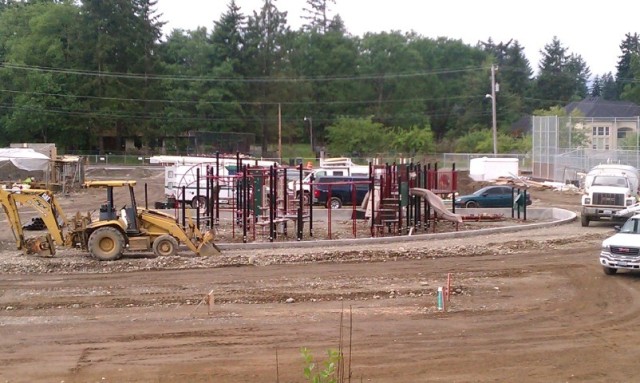 Connie Martinson was selected earlier this year as the new principal for the school.  Prior to this, Martinson was an assistant principal at Naches Trail Elementary where many of the Clover Creek students spent the last year. 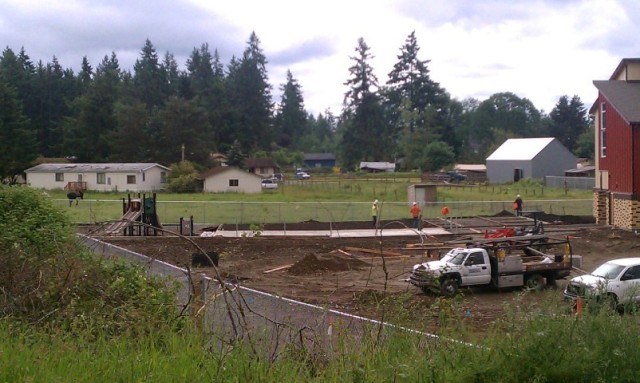 The new Clover Creek El will have a kindergarten play area, pictured here.

Carlson says a dedication ceremony will be held sometime in late 2012 and will be open to the public, but not all details are available at this time.

©  2012 Josh Magill, used with permission.  All pictures by Josh Magill.

This entry was posted in Bethel News, Events, Frederickson. Bookmark the permalink.