A jolly group of fourteen members attended the monthly meeting of Frederickson-Clover Creek Community Council on Saturday morning last week.  The bright colors and pictures on the walls of the meeting room inside Christ Community Baptist Church on 176th Street seemed to lift the spirits of those present, producing smiles and energetic greetings.

Vice President, Dean Absher, began the meeting by noting the empty chair beside him that would normally be for the President, and had been nobly filled by Amy Pivetta Hoffman until her term expired last month.

“We have a good agenda today, but I will push the discussion of the board vacancy to the end of the meeting since we have a guest speaker today,” stated Absher.

With ease, the membership quickly discussed the status of this Friday’s movie night being held at Sound Life Church with Mike Goodell, a member of the events committee, who stated it would be much the same as the last one but with more vendors this time and also inaugurate a hoola hoop contest.

The group also discussed the new electronic signs now allowed in Pierce County at public locations like the PC Skills Center on Canyon Road and other Bethel School District schools, and the fire station on 176th and 22nd.  Most comments focused on what was and wasn’t permitted to be posted on these new digital boards, as well as the flashing intervals.

Absher mentioned the two vacancies on the Frederickson Land Use Advisory Commission (LUAC), expressing the importance of this commission to keep the desires of residents at the forefront for Pierce County planners and politicians.  Commission members hold this unpaid position for a four-year term.

After more than an hour of council business, Absher opened the floor to the guest speaker: Marianne Seifert, Community Liaison from the Tacoma-Pierce County Health Department.  She discussed a new 2012 report showing the county’s environmental health trends with data from 2010.

“When making this report we asked the question: “How do we know we are making a difference on our environment?” said Seifert.  “The categories in this report are what the department wanted to track over time.”

The five categories addressed in the report are air, land, food, water, and waste.  The members of the F-CCCC were very passionate about all areas of the report, but bombarded Seifert with questions regarding the issue of wood burning stoves.

“Many of us have been here for a long time and have older homes,” commented Paul Cusato.  “Those homes have wood burning stoves that we use to stay warm in the winter.  Others may have a certified stove and not get cited by the county, but are using wet, green wood.  Others get cited because their stove may not be certified, but they are using old dried wood that is better for the air.  The rules have to make sense.”

Another hot button item caused a flurry of comments when Seifert stated that the overall health system is “complaint driven” by the public.

“The county acts on issues based on complaints by the citizens, so it is very important that folks like you speak up and bring information to the county’s attention,” admonished Seifert.

Some scoffed at that notion saying many of their complaints are against the county not doing their job.  The general consensus of the council members present was that the county doesn’t police themselves, and fails to enforce the same rules on themselves as the public.

“This group is very active on other boards and committees throughout the county, so we understand well how the system works,” Absher stated. “It is just difficult to get those that don’t live in Frederickson to understand sometimes.  They ask our opinion and then do something different than planned or expected.”

“Why isn’t the county monitoring and enforcing against itself regarding pollution caused by the constant road construction?” asked Goodell. “Yet, we are ground zero being monitored for using wood burning stoves that they say aren’t certified.”

Seifert handled every question and comment well, remarking that she didn’t have all the answers, but gave out suggestions for whom to contact, as well as her own email address to the group.  She ended her portion of the meeting to applause and a return of smiles as she mentioned how much she enjoyed the feedback from such a zealous group. 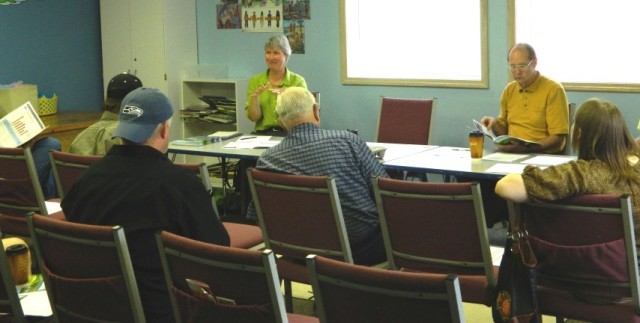 Absher finished the meeting with a discussion regarding the open post for F-CCCC president, which is a two year term.  The vote had been tabled by the board in June and July because no candidates stepped forward.  This month there were two interested parties, but only one was in attendance, Angela Magill.  The membership motioned to immediately elect Magill as the new president for the remainder of the two year term that began in July.

“I believe I can help keep this organization focused and on track to accomplish its goals toward growth,” said Magill.  “We need a younger generation to help move the values of our community forward in a positive way that we can be happy with for a long time.  Cross Park is extremely important to me and my family, as well as keeping that small town feel around here, but also allowing beneficial growth.  I’m excited about our future.”

Magill, who has lived in Frederickson for the past three years as a stay-at-home mother with three children ages nine, six and three, says her goals as president of the F-CCCC are to continue the push for construction of Cross Park, to attract younger membership to the organization by using social media and to attract more consumer businesses to Frederickson. 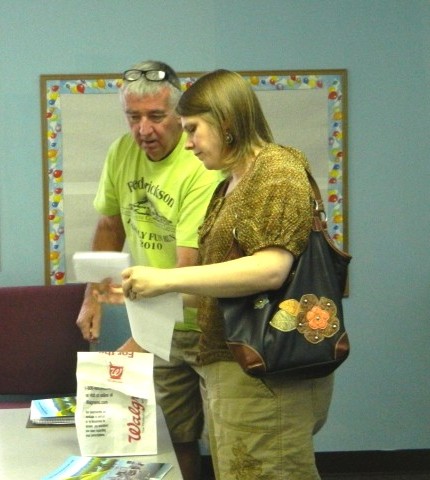 The F-CCCC’s new president, Angela Magill, confers with John Marshall, the secretary of the organization.

The meeting closed with a discussion that the board should invite to the next meeting the two candidates for the Pierce County Councilmember District #3 position that is opening up in December of this year when term-limited councilman, Roger Bush, steps down.

Those candidates are Jim McCune (R), who is a current state representative from Graham and was re-districted out of his seat.  Mr. McCune is opposed by long-time legislator Marilyn Rasmussen (D) from Eatonville.

DISCLOSURE NOTICE: The author of this article is the husband of the newly elected F-CCCC president, Angela Magill.

Editor’s Note:  Josh has also provided some information on the F-CCCC’s new president:

“Some info on Angela Magill:

– Born and raised in the small town of Kewanee, IL where her father is the airport manager of the city airport.

– She attended Southern Illinois University where she studied Computer Science.

– She is currently a stay-at-home mother, but her first job was as a phlebotomist at the hospital in Kewanee. The major reason this is important was she did it as a high school student, but was trained and trusted enough to do the job on her own. She has been the office manager for a major realty company (ReMax) and the SIU badge office. She also helped run the office at the Kewanee City Airport for her father.

– She has lived in Frederickson for three years and loves it with no plans to move elsewhere.

– Her goals as president of the F-CCCC are to continue the push for construction of Cross Park, to attract younger membership that will continue the great traditions of this organization by using the social media available today, and to attract more consumer businesses to Frederickson.”

This entry was posted in Frederickson. Bookmark the permalink.