They did it – the Spanaway Lake Sentinels defense sealed the edges and plugged the holes, not allowing the opponents to go just anywhere they desired – and helped defeat the Puyallup Vikings 24-21 in their second game of the season.

The Sentinels (1-1) were in the midst of a three-year drought versus Puyallup (1-1), not defeating the Vikings since 2009.  So as the final seconds ticked off the clock, Art Crate Stadium filled with hometown cheers Friday night.  Spanaway Lake head coach, John Robak, jumped into the air giving a fist pump, then was hugged by many of his players.

“It is exciting because I know how hard some of these kids have worked,” said Robak, who wore the grin of a proud father.  “I always tell them: ‘You don’t get paid each day; you get paid on Friday night with games like this.  This is time for pay day.’  I wanted it bad for them and they needed a game like this.  Big game and I’m excited about that.”

The SLHS defense set the tone of the game with 2:48 remaining in the first quarter, deflecting a touchdown pass by PHS quarterback Brendan Illies, which capped their first goal line stand of the evening.  The Sentinel offense quickly followed up with an 83-yard scoring burst by running back Trayvon Brown to end the first quarter.

“To make that goal line stand and then make that long run was pretty exciting for the team,” proclaimed Robak.

The two teams traded the ball during the second quarter, but Puyallup would take advantage of an SLHS fumble, tying the game at 7-7 with one minute remaining in the first half.  The ensuing kickoff excited the SLHS crowd as Aidan Malalang fought his way for 30 yards, but was brought down before he could clear the last defender. 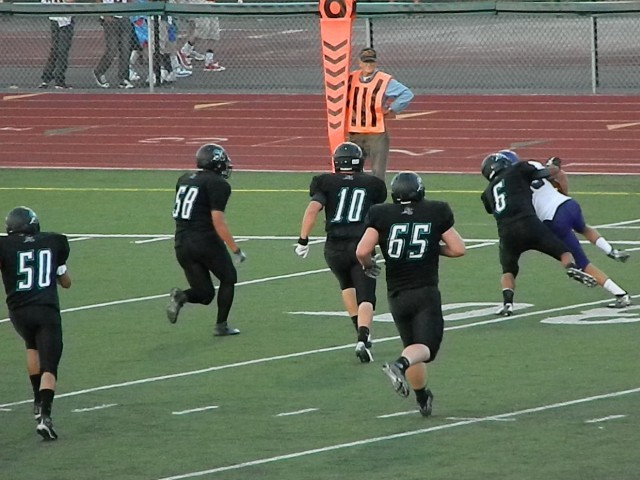 Some steady running from Viking running back Levi Jordan moved the ball to the SLHS 16-yard line.  Then, Illies attempted to pass for the score but a diving deflection by defensive back (also quarterback) Joe Martin kept the drive going.  A second pass by Illies was stopped again, but an SLHS pass interference penalty moved the ball to the 8-yard line. On first and goal, the chant began again: “Defense, Defense, Defense.”

The Sentinel defense responded to the crowd, with the D-Line pushing hard to close all the gaps and the defensive backs shooting through to force a fumble that SLHS recovered, saving another potential touchdown by Puyallup.  Cheers rang out and the offense took over.

The Sentinels methodically moved the ball down the field with two big runs by Brown and an 11-yard pass from Martin to receiver AJ Perez.  Martin then kept the ball for a 10-yard scamper of his own instigating a timeout call from Puyallup to stop the momentum.  A reverse run by Kyle Pickering ending near the goal line brought the crowd to its feet, but a holding call sat them back down.

Robak, with 4:30 left in the third and thinking it was the perfect time, gave Martin the signal to go for the end zone.  Martin called Pickering’s number again, but this time for a pass that was dropped at the goal line.  A loud moan came from the mass of fans.  A 40-yard field goal was the next call, but the attempt went low producing another grumble. 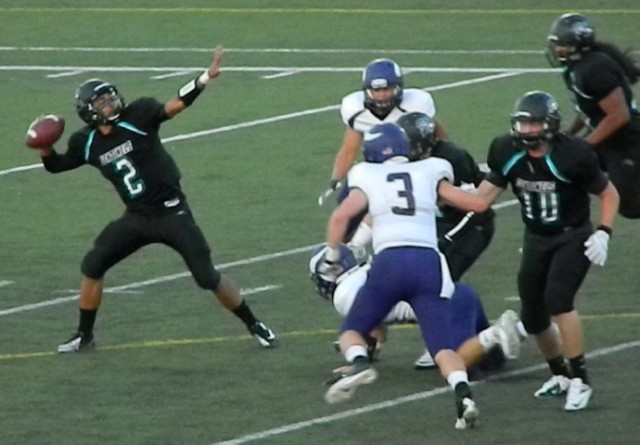 It was the Vikings turn to take advantage.  Illies tossed to receiver Riley Andal on a crossing pattern, who gutted out 52 yards.  Illies then kept the ball to score on a 28-yard run to the right side.  But Spanaway Lake did not feel like ending the third quarter losing, so they began a quick charge down the field after the subsequent kickoff.  The result was a 23-yard rushing touchdown by Brown, who wouldn’t give up as he dragged two defenders into the end zone with him to tie the game at 14-14.

The Sentinels weren’t done because defensive lineman Ryan Dix gave the offense another chance when he crushed PHS running back Trevor Whitney behind the line of scrimmage.  SLHS then intercepted the ball allowing Martin to score the go ahead touchdown with 36 seconds remaining in the third quarter.

Illies was not discouraged flinging a 53-yard pass on the first play after getting the ball back, then another 15-yard pitch.  But as if knowing it was time again, the Sentinel crowd began the chant: “Defense, Defense, Defense.”

Whitney got the ball, but was stopped at the line by the SLHS defense.  Illies went to the air, but the SLHS defense knocked down two consecutive passes.  With fourth down and 10 yards to go for the Vikings, they stayed with the pass hoping the third time would be the charm.  Another deflection gave the ball back to the Sentinels, concluding their third goal line stand of the game.

Up 21-14, Robak relied on SLHS’s ground game to run down the clock.

“Earlier they were stuffing the box pretty good on us, so we threw the ball a little bit to try and loosen them up,” stated Robak.  “Then we tried to break a couple tendencies we had last game and they started to pop.  Our running backs ran hard and our linemen blocked hard.  Some penalties took us out of some early drives, but late when we needed them we said, ‘Let’s work the clock.’  So we started working the clock with about eleven minutes to go, taking it all the way down to two and a half minutes.  We were pretty happy about that.”

Spanaway Lake kicker Logan Stegner added a 29-yard field goal late in the fourth to give the Sentinels a 24-14 lead.

Puyallup never quit, fighting for another score off two big passes by Illies with 2:37 remaining.  A Viking onside kick attempt failed as SLHS snagged the ball, sending the Sentinel fans into a frenzy of cheers over the 24-21 victory.

“We gave up a couple big plays and made some mistakes, but it was great that [the defense] stepped up when the game was on the line,” said Robak. “Then to come up with two more goal line stops later in the game was huge when we needed it.”

The Bethel Braves defeated Tahoma High 34-24 on Friday night in Maple Valley for their second victory of the season.  John Thompson scored four touchdowns – three rushing and one receiving – twice in the fourth quarter, including a 73-yard run to seal the victory.  Thompson rushed for 183 yards and caught four passes for 82 yards.  First year quarterback, Conner Reopelle, passed for 268 yards on 32 passes, and he finished with two passing TDs.

Commenting on Bethel’s Thompson, Tahoma head coach Tony Davis told the Seattle Times: “He is a great player.  We saw him last week kind of take over a game, and he did it again tonight.”

The Graham-Kapowsin Eagles won on the road for the second straight week against league opponent Curtis by a score of 28-12.  The defense was also on display as the Eagles held Curtis to just six second-half points.  Junior running back Teague James finished with 142 rushing yards, including a 72-yard run in the second half.

“This game was definitely a statement game,” senior cornerback/wide receiver Kahlil Dawson told The News Tribune.  “We pretty much treated it as a championship game.”

This entry was posted in Bethel News, Josh Magill. Bookmark the permalink.