Fans of Spanaway Lake High School football can see tonight’s game from the comfort of their own home by tuning in to Root Sports Network, who will broadcast live from Art Crate Stadium.  The Sentinels (3-2) host a tough squad from Curtis High that has just one loss this season and picked up their fourth win last week in a shut-out against Beamer.

“Being on live television is great opportunity for our student athletes to be seen and highlighted throughout the region,” says Dan Heltsley, Bethel School District’s Director of Athletics.

The game and Root Sports television coverage begins at 7:00 p.m.

On Friday night, the Bethel Braves will square off against the Graham-Kapowsin Eagles in a district match-up that BSD has dubbed on their Twitter and Facebook feeds as “the biggest rivalry game of the year.”

“The rivalry started when GKHS opened,” Heltsley says.  “A significant number of student athletes and coaches left BHS and went to GKHS.  From there it has taken on a life of its own with sell-out crowds and traditionally highly competitive games that have gone down to the wire and two [games] into overtime.

The Braves will enter Friday’s game with a 2-3 record with last week’s loss to Emerald Ridge, while the Eagles sit at 4-1 after winning their second straight last week in a crushing defeat of Rogers.

This game could be a momentum changer for Bethel, but will be tough without perennial all-star John Thompson, who BHS head coach, Gavin Kralik, says may not play due to an injury he suffered last week.  Yet, he hopes history is on their side.

“Graham-Kapowsin has the edge,” comments Kralik.  “Even with John, we would still be a heavy underdog.  This game means a lot to our players and alumni.  We have come into this game with the same record once, a better record once and with a worse record four times.  We have won all six meetings.  So our kids will play hard as we always do.”

It is because of that history that GKHS head coach Eric Kurle says the Braves have the edge.

“Bethel has the edge because they have won six straight,” counters Kurle.  “It should be a great game with the players and fans having a great time.”

The game will begin at 7:00 p.m. Friday at Art Crate Stadium. 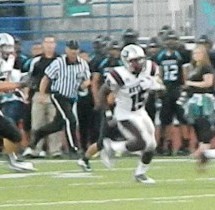 This entry was posted in Bethel News, Josh Magill. Bookmark the permalink.

2 Responses to Bethel Sports: football preview for Week of October 1-6