Just days after celebrating other building openings across town, such as the Bethel Learning Center and the remodel of Shining Mountain Elementary School, Bethel School District executives were at it again.  The excitement of these many new or remodeled structures around the district was shown in the smile BSD’s top administrator displayed Tuesday afternoon inside the Pierce County Skills Center’s newest phase.

State Senator Randi Becker, center, led a distinguished group of dignitaries at Tuesday’s dedication of the Phase 2 construction of classrooms at the Pierce County Skills Center in Frederickson.

“’Tours-r-us’ right here,” exclaimed Tom Seigel, BSD Superintendent after the speakers were finished.  “Want a tour, than I’m your guy.”

The wind blew strongly outside the PCSC’s new Olympic Building at noon as residents and dignitaries gathered to celebrate the opening of Phase 2A for the Skills Center.  The blustery weather did not keep the merriment from starting right on schedule, but then a hiccup.

PCSC Director, Michelle Ledbetter, began speaking into the microphone, but it did not work.  She quickly removed it from the stand and shook it a little.  Success.  Then, Ledbetter introduced the JROTC from Washington High School in the Franklin Pierce School District for the presentation of the flag.  Eatonville High School students, Stephanie Hammock and Hailey Van Buskirk, honored the crowd of nearly one hundred with a singing of the national anthem.

As with other recent dedications, many public figures were on hand to witness the event, including state senator Randi Becker and state representative Tami Green.  Most of the BSD board members were also in attendance, as well as BSD Executive Director of Operations, Rob Van Slyke.

The importance of the building was underscored by all the speakers.

“You know this is the thirteenth skills center in the state of Washington,” stated Becker.  “I always refer to it as the ‘lucky 13’ when I talk to folks.  The kids that are going to go to school here are going to graduate with the opportunity to earn a living wage.”

“I think the most important part of the skills center is it creates careers for our kids and a life time of opportunity,” said Green.  “This is a bi-partisan issue and we all worked together on our Pierce County delegation to make sure the funding was there.”

BSD Board President, John Manning, took time to thank other area school districts and colleges in Pierce County that were supportive of making the PCSC’s second construction phase a reality.

“The dedication of phase two could not have come at a better time,” claims Manning.  “With the programming and technical economy starting to turn around, the opportunities for our students could be great.”

Senator Becker went further, commenting on the duty to help the next generation understand the continued need for the skills center.

“With people like Tom Seigel and a whole coalition of people in Pierce County supporting the skills center, this shouldn’t be just what we have right now, but something we keep adding onto for the future,” remarked Becker.  “I would like to make sure we let these kids know how special it is to come here every day.  That they remember where they got the opportunity to learn these skills and they give back because of it.”

The final speaker was not a dignitary, but James Johnson received the loudest applause of anyone.  A PCSC student in Aerospace Composites, Johnson shared how the center has helped him learn knowledge he would not otherwise have been privileged to receive.

“After finding out about this program, I felt blessed with opportunity between an education and a future career,” says Johnson, a high school junior. 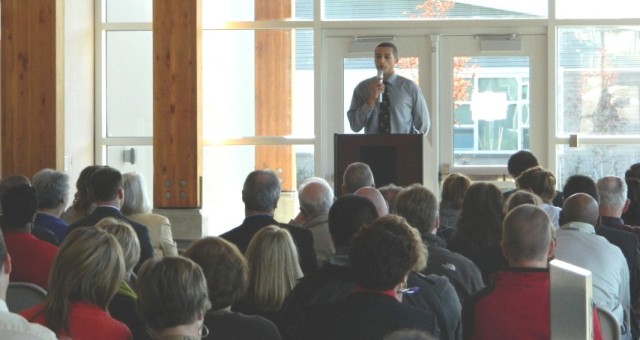 With that endorsement, Ledbetter called for the ribbon cutting.  Everyone gathered around the hallway entrance to watch the official opening of PCSC Phase 2A building.  A cheer rang out with a single hand-in-hand scissor snip by Senator Becker and Representative Green, surrounded by other officials.

Multiple tour groups began with Seigel and Ledbetter leading the first one.  Students and teachers, who already started classes, graciously explained the inner workings of the classrooms to each group.  Refreshments kept the crowd lingering and plans were already being laid for the next building celebration at the Pierce County Skills Center. 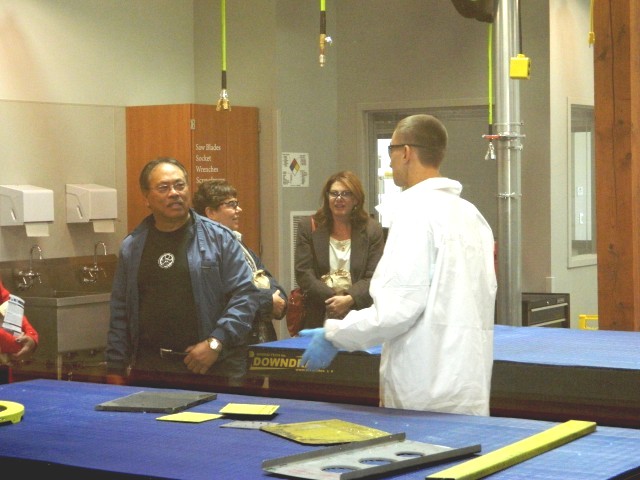 A PCSC student explains the areospace composites course during Tuesday’s tour of the facilties.