The Graham-Kapowsin Football squad made a statement in Friday’s league match scoring a 42-7 victory over the Beamer Titans.  The road win notched the Eagles their seventh win of the season.  With just one loss and tied for second in the South Puget Sound League-South standings, GKHS will attempt to make a move toward the top spot this Friday when they square off against cross-town rival Spanaway Lake.  The Sentinels enter the competition with a 3-5 record after their 28-14 league loss to Emerald Ridge. 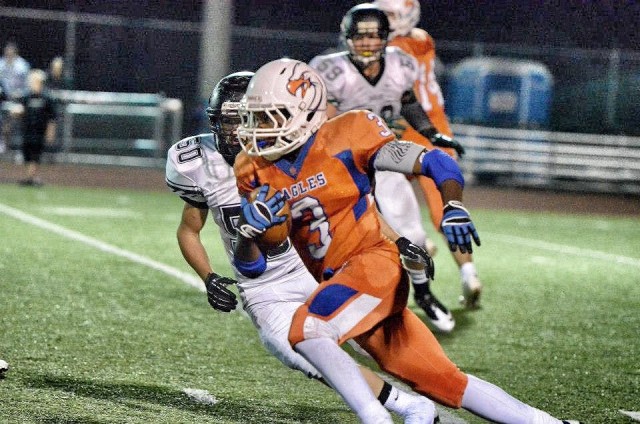 Pictured is Kahlil Dawson, the explosive defensive back and
wide receiver for GKHS. Picture courtesy of the Northwest
Prep Report, and provided to the Mountain News by Josh Magill.

The Eagles Girls Soccer club defeated the Bethel Braves behind goals from both Kylee Sarchett and Jordan Narramore.

The Bethel High Volleyball crew spiked their way to a win over Beamer with ten kills from Jessica Markham, as well as 12 kills from Mackenzie Valdez, who also contributed 21 digs.  Those kills were the product of 38 assists from setter Courtney New.

The Braves rackets were rewarded for hard work this season as Steve Cagle and Gene-Paul Dahl were selected 1st Team All-League in Boys Tennis, while Colton Schnabel and Logan Pruitt were selected for All-Tournament Academic Honors.  Cagle placed 7th in singles and the doubles team of Dahl and Pat Hamilton placed 9th to qualify for the West Central District Tournament.

In Boys Golf, Drake Brown swung his way to a 7th place finish at the SPSL State Qualifying Tournament for BHS.  Also, Girls Soccer brought home a shutout victory against Spanaway Lake in a combined performance at goal from Kacie Law and Bri Stutheit.  Audrey Young scored a goal for the Braves.