Voting in Frederickson – a personal tale

No lines or waiting greeted voters on Tuesday afternoon at the polling center set up inside Pierce County’s Maintenance Facility near Canyon Road and 192nd Street in Frederickson.

“Our system has been working very well,” said elections volunteer, Roberta Alexander.  “We have had a steady flow of voters all day, with a lull around lunch, but never any long lines.”

Volunteers helped voters every step of the way, from the front door and down the hall, through the voting process, and quickly back out the front door.  Voters initially approached the polling center with hesitation, but came out with smiles and an extra bounce in their step after navigating the process in an average of less than 10 minutes.

Residents that had already completed their ballot and were just there to drop it off, simply followed the bright red arrows on the floor and volunteer instructions to the drop box, then given a “I Voted” sticker and kindly sent on their way.  In and out in under two minutes.

Others who did not have a ballot were checked in, handed a voters guide, and sent to the electronic voting booths along the walls to make their candidate selections.

The atmosphere was upbeat and jolly throughout the polling center, but most notably at the entrance where one election volunteers kept the mood light and exciting.

“Go down to those pretty ladies and they will check you in,” said one volunteer, pointing down the hallway toward the polling center.

Another volunteer, greeting and thanking voters at the entrance, reminisced about the first time she voted in 1973.

“I hitch-hiked from Montana to Wyoming to cast my vote,” she said.  “I have never missed an election.”

Even some children got in the voting spirit as entire families visited the facility to cast their votes, including one young couple who were first time voters.  Volunteers said they had seen many first time voters this election and hoped to see more before the day ended.

One father, on his way out after voting, said his daughter had given him “all the answers.”  His daughter grinned as she skipped across the parking lot holding her father’s hand, wearing his “I Voted” sticker. 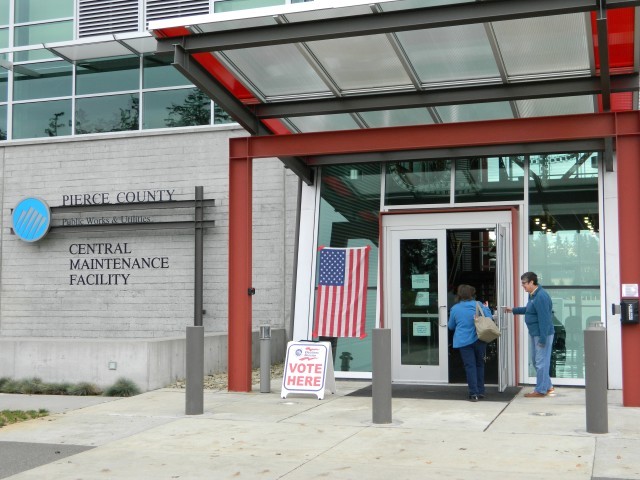 This entry was posted in Culture, Frederickson, Josh Magill, Politics. Bookmark the permalink.

3 Responses to Voting in Frederickson – a personal tale