Harris pleaded not guilty and was placed in Pierce County jail pending payment of his a $2 million bail. He is charged with 2nd degree manslaughter. For the past week he has been in federal custody on an unrelated weapons charge.

The court’s gallery was packed with family, friends and media as Harris entered the chambers. He was heavily shackled and wore a full-length padded suit, believed to be bullet-proof, and Nicole’s supporters gasped audibly when he walked into view.

Charging documents and court statements further shocked the family. Harris, 29, has numerous prior convictions, ranging from a 2008 assault to a 2011 DUI.

In addition, White’s death was brutal. Court documents reveal that she suffered a fractured skull, a broken eye socket, several broken ribs, and numerous contusions and lacerations. Harris, too, when he was later arrested on the weapons charge, was found to have a swollen wrist, and numerous bruisers and scratches on his arms and legs.

“He is a complete monster,” Amy Ancira later told the Mountain News. “He needs to be held fully accountable for his actions.”

Ancira said that Harris deserves the death penalty, a sentiment widely shared by Nicole’s supporters, dozens of whom brought signs into court demanding an “Eye for an Eye.” Court officers insisted that they not display the signage before cameras, and they later held a protest rally in front of the courthouse, receiving approval from many passerbys.

On the street most of the signs proclaimed “Justice for Nicole,” and when asked what that justice might look like, one supporter simply said, “Fry the motherf-ker.”

But the supporters also drew attention to another disturbing dynamic in the death of Nicole White – did Harris act alone?

Harris lives with his mother in an upscale double-wide sited at the end of a rural road in Graham, off 70th Ave. Reportedly, she was home when her son allegedly murdered Nicole. Court documents also reveal that she spotted bloody clothes and a blood stain in her home on the Sunday after the incident, but supposedly was told by her son that the family’s dogs had killed a rabbit and tracked in blood.

Additionally, a neighbor told police she heard a woman’s scream about 4 am on the morning of June 7, which ended abruptly. Yet, she did not call 911.

Casting more doubt on Jonathan Harris’ mother, Amy Ancira told the Mountain News that Nicole’s mother went to the Harris home on Sunday afternoon after her daughter failed to return home in Orting. Nicole’s family claims that Mrs. Harris gave them no information, denied access to Jonathan, and told Nicole’s family to leave.

As a result, several signs in the courtroom demanded that Harris’ mother be charged as an accomplice.

However, the Mountain News was unable to talk with the mother, and no one answered at the Harris’ home when this reporter knocked on the door.

When asked about the mother, Sheriff’s spokesperson Ed Troyer simply said that his department is “still investigating.”

But adding to the mystery, Jonathan Harris was captured by police because he returned to the scene where he allegedly dumped White’s body on early Sunday. Because of his DUI conviction, his vehicle has an ignition interlock which requires him to breathe into the device to start the engine.

Why he revisited the scene is unknown, but presumably, when he returned from inspecting the body on Sunday, he blew into the interlock, which also snapped a cell phone picture of him and his surroundings. Police retrieved the cell phone picture when they arrested Harris on the weapons charge, and spent nearly two weeks matching local landscapes with the picture. On Saturday, June 20, Sheriff deputies and K-9 teams found Nicole’s badly decomposed body in a wooded ravine off the Camp One East Road on Hancock timberlands southeast of Lake Kapowsin.

The court proceedings also had the synchronistic effect of bringing many interested parties together who were able to share their insights into how Nicole and Jonathan met, and how this death might have occurred.

Members of Nicole’s family said that she had met Jonathan weeks earlier through an online dating service. In addition, “Kathy,” the owner of the Jeepers Country Bar and Grill, told the Mountain News that both Nicole and Harris were known as regular customers at Jeepers, and that they had met there as friends the week prior, Saturday, May 30.

“But it was a date on the 6th,” she told the Mountain News.”

Tracey Rutherford, a Jeepers customer toting a sign at the courthouse, said that she had spoken with Nicole at Jeepers on the 6th, confirming that Nicole and Harris were on a date.

“I saw her standing by herself near the fire pit out back. I walked up to her and asked how it was going. She said it was a ‘first date’ and not going too good because Harris wasn’t talking to her and was hanging out with everyone else,” Rutherford said.

Rutherford said that she and her friends stayed until closing, at 2 am, and never saw anything threatening.

“I didn’t see anything out of the ordinary or aggressive. It was just a regular night.”

However, the Jeepers owner did acknowledge that Harris had broken two beer bottles that night.

“He said the first one slipped out of his hands, and the second one happened out at the fire pit, “Kathy told the Mountain News. “My security talked to Harris, but it didn’t seem like a big deal.”

“He’s worked at a lot of bars around here.”

She also described Harris as a non-threatening guy.

“I’ve even driven him home once – he lives not too far from my place. I certainly wasn’t afraid he was going to kill me,” she said.

As for Nicole and Harris, Kathy said they left together, leaving the bar at 2 am.

“She hugged my security guy out in the parking lot, and nothing seemed out of place. If she was worried about something, if she was scared, she could have whispered something to the security guy but she didn’t.”

But another woman at the courthouse raised other concerns. A woman who said she was a waitress at the Roy Y Bar and Grill, near Jeepers, claimed that Harris worked there as a bouncer. The waitress said that Harris frequently followed women to their cars in a menacing manner, but when she confronted Harris he claimed he was providing a measure of protection, a notion she did not believe.

But a related issue looms for many women – how can you trust an online dating site?

“Online dating is now the way of the world,” Tracey Rutherford said. “Everyone is doing it – but how can you be safe? What happened to Nicole is very sad, and it hits very close to home – it could have been anybody.”

Acknowledging that Harris was not a stranger, Amy Ancira simply said, “Nicole trusted someone who could not be trusted.”

Nicole’s family has not made any funerary plans as they have not received the body back from the coroner, and the Prosecutor’s Office has confirmed that the autopsy process is not finished.

Pierce County Prosecutor Mark Lindquist said on Q-13 that the state of decomposition was delaying the testing process, and his office wanted to wait until all findings were complete because he would increase the criminal charges to first degree murder if premeditation or planning could be determined. 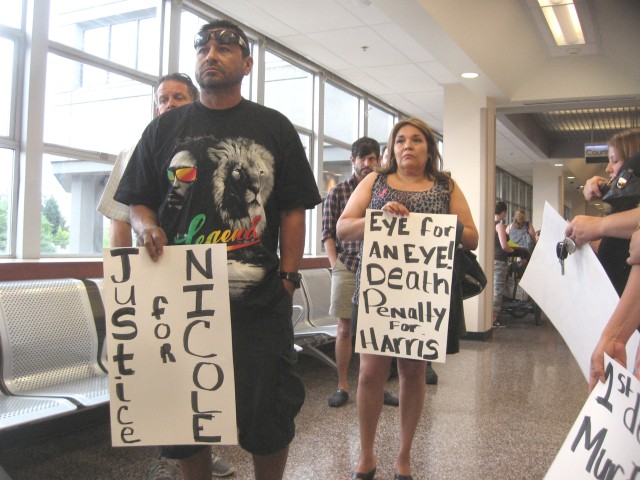 Family members Steven Ancira and Gracie Sandoval display signage at the arraignment of Jonathan Harris in the murder of Nicole White.

Family and friends showing support for Nicole in Tacoma 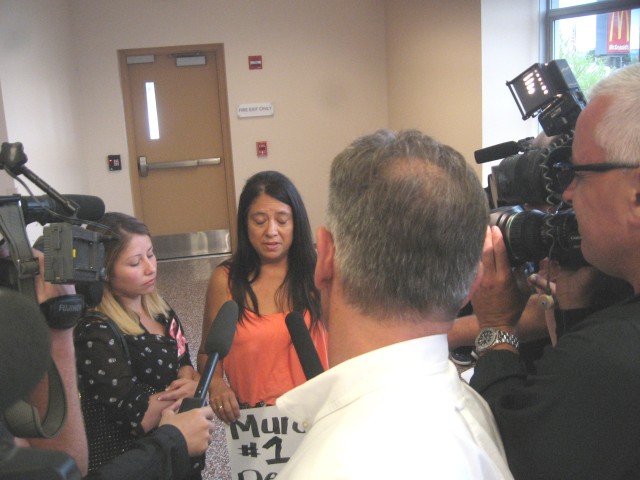 Amy Ancira, right, and Melissa Nieto, left, addressing the media at the Pierce County Superior Court on Wednesday, after the arraignment of Jonathan Harris in the murder of Nicole Harris

This entry was posted in Cops and courts, Graham News, Kapowsin, Orting, Uncategorized. Bookmark the permalink.