Special to the Mountain News

The national spotlight that was placed upon Mount Rainier National Park over the past few months – first in the tragic shooting death of NPS Ranger Margaret Anderson, and then days later in the dramatic disappearance and search for seven different mountaineers lost in epic winter conditions– has brought sharper focus on the extraordinary heroics of two climbing rangers in earlier exploits.

The awards were presented by Secretary of the Interior Ken Salazar for the actions that Kessler and Charlton took in rescues on the Ingraham Glacier on June 6, 2002 that saved the lives of three climbers, and recovered the bodies of two other mountaineers from a second party.

Here is Mr. Young’s narrative of Kessler’s and Charlton’s heroics:

Nearly ten years ago, on June 6, 2002, three individuals climbing the Ingraham Glacier on Mount Rainier were seriously injured after a wind gust blew them off their feet, and they slid uncontrollably on hard, icy snow for 150 feet before falling another 60 feet into a crevasse.

National Park Service Rangers Paul Charlton and Glenn Kessler led a rescue team to the accident site, where at an elevation of 11,800 feet they directed the extraction of the injured climbers from the deep crevasse.  This involved the technical act of lowering personnel down a 60-foot narrow chasm of vertical ice onto a snow shelf where the climbers had landed.

The injured were then triaged and prepared for a rope lift out of the crevasse.  After the extraction, Rangers Kessler and Charlton devised another rope system to lower the injured climbers hundreds of feet to a location where a helicopter could safely extract them.

Due to their exceptional mountaineering abilities and skill, Charlton and Kessler safely managed this arduous and technically challenging rescue in sub-freezing temperatures, at high altitude, and on treacherous and unforgiving terrain of ice and snow – thus saving the lives of three individuals.

In addition, while managing this rescue Charlton and Kessler also noticed that two other climbers – ones they had encountered the previous day – were missing from their camp tent, where they should have been given their plan of summiting and returning to their tent the day before.

Charlton and Kessler then organized a second search team and launched another ascent of the Ingraham Glacier to check the likely fall lines and crevasses in hopes of finding these additional climbers alive.

To assist their efforts, they summoned another helicopter to provide aerial surveillance.  Subsequently, the helicopter spotted two individuals on the slopes, just below a 100-foot ice cliff near the 12,400 foot mark on the Ingraham Glacier.

However, the helicopter was unable to get a closer look at the climbers or the location; therefore Rangers Charlton and Kessler went on foot and had to navigate uncharted and treacherous glacial terrain filled with steep ice and crevasses, enduring windy and sub-freezing temperatures to get there.

When they finally arrived at the base of the 100-foot ice cliff, though, they found the two missing climbers entangled in their ropes after an obvious fall, and both had suffered fatal injuries.

For their extraordinary courage and heroic efforts under extreme environmental and physically challenging conditions – to save the lives of the three injured climbers and to attempt the search and rescue of the additional two missing climbers on Mount Rainier on June 6, 2002 – Paul Charlton and Glenn Kessler were awarded the Valor Award of the Department of the Interior.

Chief Ranger Chuck Young stated “The work that park staff does day-to-day is amazing, shows great dedication, and often goes beyond the call of duty.  Every so often, the work they do can be described as extraordinary – this is one of those times.” 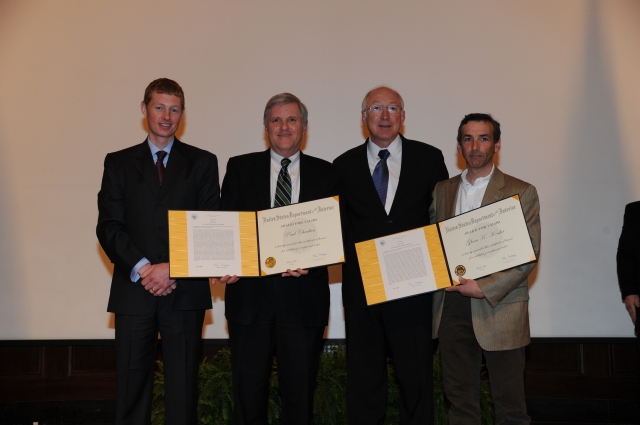