Editor’s Note: Meyer Louie is a local aficionado of the DB Cooper story and he recently traveled to Tina Bar, the location on the Columbia River where $5,800 of the skyjacker’s ransom money was found in 1980. His partner for the day was a friend who is well known to Cooper sleuths by his moniker Robert99. Robert99 posts regularly on the DropZone Cooper forum, www.dropzone.com.  Here is Meyer’s report.

I had the pleasure of meeting a great guy, Robert99, and spending the day exploring Tina-Bar with him.  We spent the day thoroughly exploring the area in the immediate vicinity of the Ingram money find.  Robert99 brought the township/range coordinates of the money find location, and — after figuring out how to use his brand new, hand-held GPS locator — we eventually found ourselves standing on the exact spot of the  Brian Ingram money find – using the GPS coordinates as our guide. After taking a lunch break at a McDonald’s in downtown Vancouver, we came back to Tina-Bar and used Robert99’s metal detectors.  We ended up scanning and searching pretty much every square foot of a 25-yard by 50-yard section just above the money find.  It was hot, around 100 degrees where we were (Robert99 confirmed the temperature with his equipment).  We both got real sunburned, and I came down with a little heat exhaustion – but some shade, lots of water, and a jump into the Columbia River fixed me right up.  I’m getting a little ahead of myself.  The day played itself out in stages.

I emailed Robert99 from my home in the South Puget Sound area at 5:30 am, informing him that I was on my way to meet him at 8:00 am, in Vancouver, WA, at the Best Western hotel – where he was staying.  I got there a few minutes late.  Robert99 had tons of maps; he took one out and showed me where we were headed for the day.  We took off.  Our first stop was Vancouver Lake Park.  We found a picnic table, where Robert99 took out more maps.  Then he took out his NB6 parachute pack and harness (actual canopy not included).  He thoroughly explained every part of the apparatus – and how it all worked together.  Amazing information!  We looked at several more maps, and I saw a 2-inch binder of just some of Robert99’s research.  Amazing, again.

Then we headed to Tina-Bar.  What a great area – a couple of times we were fortunate enough to see Mt. Hood and Mt. St. Helens from the same spot.  I followed Robert99’s nice, blue sedan in my pickup.  We drove just past the Fazio Brothers sand operation and into the Fazio driveway.  We stopped at the main office and got permission from Mr.  Fazio (I didn’t get which brother he was – I did the asking, I must’ve been a little nervous) to spend several hours at their beachfront there, Tina-Bar.  Mr. Fazio was very cordial and gracious; he asked that we not drive down onto the river road – where the fishermen were, members only.

We spent a long time just walking around — looking and exploring.  I took several pictures – all day, in fact (several are attached).  We met a gentleman there by the name of Jon Livermore (he gave me permission to use his name here).  He said he had been fishing Tina-Bar for 56 years – that he had pretty much grown up there – give or take a few years.  He was very helpful and cordial, and he answered every question we asked — and much more. He talked about the cabin that was once there.  It would be several feet off shore, well into the river by now.  The cabin was removed before shore and bank erosion would have eventually swept it away.  Jon said in the summer of 1978, he was able to drive his car here (he pointed out to the Columbia River – in the same direction where the cabin used to be).

Jon talked about the sand and clay.  He said the piles of sand all around us came from river dredging; you could see the original clay only close to shore.  He said it was not unusual for the beach to lose two feet to five feet of sand in high-river runoff, and it would be even more in a flood event.  Jon said the beach at Tina-Bar in 1980 was several feet higher (as in way over my head higher) than it is now.  Several feet of shore have eroded away – it was painfully obvious, in light of Jon’s explanation.  He said it’s only going to get worse.   Jon also pointed to the shore sand and said to notice the slope, the steepness, of the sand itself, and also to notice the little “cliffs” at the top edge of the sand.  “That’s erosion…where the sand keeps dropping off.” he said.  “We’ve lost trees – the trees and shrubs [close to shore] will go too.”  Beyond the top edge of the little sand cliffs was a ridge, an embankment of piled high dirt that ran parallel to shore.  Beyond the ridge of dirt was a slight land depression – a little draw, if you will – that ran parallel to the embankment.  We asked about that.  Jon said that was a filtration system to keep cow feces out of the river.  Robert99 asked if the Columbia River could have ever breached the embankment and gotten into the filtration land area.  Jon said “No.”  We asked Jon to indicate the highest water level he’d ever seen the Columbia River reach.  He pointed to a log on the hillside, below the top of the embankment — above and to the right of the money find, toward the Fazio’s.  My estimate – about 10-15 feet above current river level.  Robert99 will, no doubt, have a better estimate – gauging water levels isn’t exactly my area of expertise.  Jon came by several times thereafter to offer his assistance.  What a nice guy!

Robert99 said we should check out a briar patch at the top of the embankment – just below the little sand “cliffs.”  We hadn’t broken out the metal detectors yet.   So what I do?  I put on my winter coat, some long pants, and my boots (it was 100 degrees out, remember).  I take just a hammer and a pocket knife and I cut my way through the briar patch – thorns and all – checking every square inch as I inched my way toward the center of the briar patch.  I’m thinking that’s where the heat exhaustion and all those scratch marks came from, ya think?

We did more exploring, more talking to Jon.  Robert99 used his GPS device to pinpoint the exact location of the money find, using the township and range coordinates that Robert99 brought with him.  We marked the spot, exactly.  Around that time, Robert99 found some canvas webbing in the sand, not too far from the money find location.  It looks like an extra wide belt (see attached photo).  It has some lettering on it that said ‘AAR 77.’  Also, there is something else; it says ‘7,700 LBS.’  Can anybody help identify what this webbing is?  Is it a parachute harness?  Is it a cargo strap?  What is it?  We aren’t sure.  Your assistance is needed – and appreciated.  Thanks.

Then we took a lunch break. We drove all the way past downtown Vancouver to a McDonalds — and ate big.  We were hungry and thirsty and definitely feeling the effects of the high temperature that day.

When we returned to Tina-Bar, we got out the metal detectors and commenced to search every square foot of the embankment and filtration land areas – 25 yards by 50 yards I’d say.  Thanks to Robert99 for the great gear, sophisticated instrumentation, and abundant information — from all his years of quality research.

We ended the day at Tina-Bar, late afternoon, then we drove back to the Best Western.  Robert99 bought us a soda (and lunch too, by the way, thanks again).  We sat in the air-conditioned Best Western lobby and reviewed our day at Tina-Bar.  We didn’t find what we were hoping to find (a parachute, more money, lots of pretty dancing girls), but we learned a lot by being there.  We explored, we asked questions, and we carefully examined and studied the immediate area surrounding the exact money find location at Tina-Bar.

If there are any errors or omissions in my report, Robert99, please feel free to correct and alter as you see fit.  I thank Robert99 for sharing his wisdom, knowledge, expertise, research, and hospitality.  He traveled a great distance to be here today.  And thanks for the invitation, Robert99 — it’s a day I will never forget. 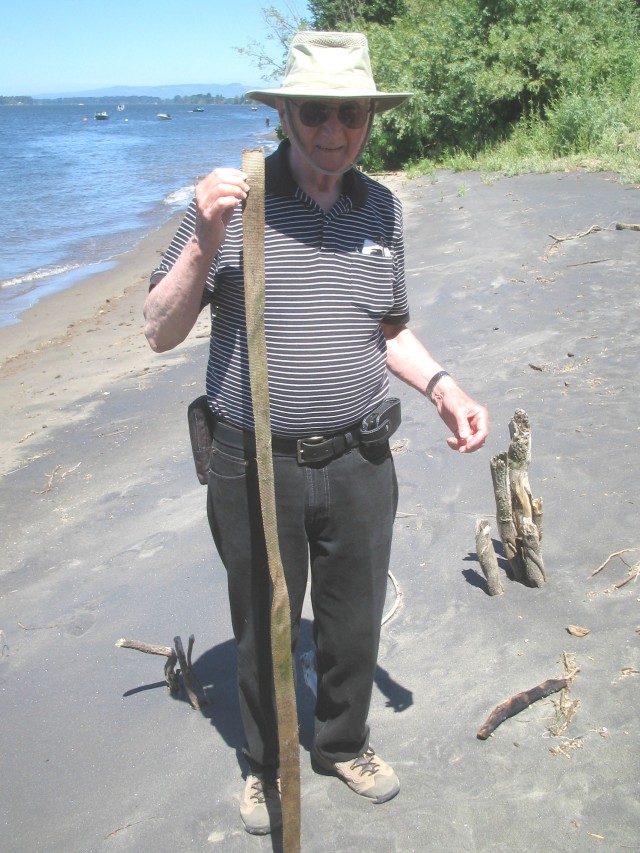 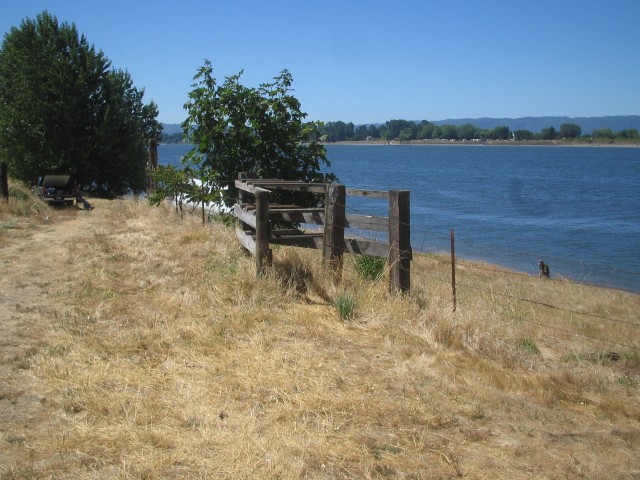 The Columbia River, looking upstream towards Vancouver and Portland, from Tina Bar.