What is the New Physics?

An excerpt from my book, “The New Physics – An Introduction to the Science of Consiousness.” In development.

When I first heard the term, “The New Physics,” a title indicating the expansion of classical physics to include the study of how human consciousness affects physical reality, I wasn’t quite sure what it meant. I had a general idea that it referred to something akin to mind-over-matter and that it probably involved quantum physics, but never for a second did I think it was a cause for derision.

For many though, such as a particle physicist I met in the hallways of the Astrophysics Building at the University of Washington, the New Physics is science gone awry in the New Age.

I spoke with this professor while researching the UW’s Helicity Injected Torus generator for a magazine article I was writing on anti-gravity. His “HIT” generator is a high-tech gizmo that spins electromagnetic fields to produce electricity and I was curious about the relationship between anti-gravity and torsion fields, the latter being another form of a circulating field. An example of a torsion field is a tornado.

But when I asked this professor about his rotating fields and a possible link to anti-gravity, his reply stunned me.

“You’d better ask someone who studies the New Physics.”

More troubling, the tone of his voice implied that I should make my inquiry in a crystal shop in Sedona, Arizona, and not in the halls of mainstream academe. I had suspected he would view antigravity as a controversial topic, and maybe I should have used the more acceptable scientific term, “field-effect propulsion,” but, I wasn’t ready for the put-down.

Like a good journalist, though, I sloughed-off the affront and continued my research elsewhere. The resulting article, “Antigravity: The Holy Grail of the 21st Century,” was published by Nexus magazine, and it earned me an invitation from the American Institute of Physics to present the paper at their Space Technology Application and International Forum (STAIF) in 2004. The guts of that piece now appear in the chapter discussing the technology of the New Physics.

Although I’m a curious kind of guy and do have a BA in Biology, I’m not particularly knowledgeable of physics or even field-effect propulsion. Rather, my motivation to delve into the subject of antigravity, and ultimately the New Physics, was born at Ramtha’s School of Enlightenment and my journey into a greater spiritual maturity.

In particular, at RSE, which is located in Yelm, Washington, I have been studying the methods of creating realty by focused thought. Although many individuals have participated in my instruction, my primary teacher has been Ramtha the Enlightened One, an entity who channels through the body of a woman named JZ Knight.

Ramtha does not teach mind-over-matter, but mind as matter. I’ve never heard him mention the term “New Physics,” but Ramtha has definitely taught me a lot about the concepts of its core sciences: principally quantum physics and neurophysiology. My digging through the vast amount of literature required to write this book has not only deepened my knowledge of mainstream science but has also sharpened my understanding of Ramtha’s teachings. Hence, I’ve been doubly blessed.

Specifically, this book examines the scientific inquiry into how consciousness influences our lives, and even creates it. As such, we’ll explore the hypotheses and research seeking to understand how a consciousness can produce disease or perfect health, poverty or fabulous wealth, and more.

This book is also a narrative, the story of my journey to understand this science, which is a body of knowledge that I sense can fuel my evolution toward what I consider God-Realization.

Rest assured though, the New Physics is not an attempt to dress up woo-woo theories, quasi-scientific quackery or psychobabble. Rather, the New Physics is an exciting new direction that legitimate science is taking, one that is serious, multidisciplined, and filled with profound ramifications.

Oddly, the idea for writing this book did not come from my associations at Ramtha’s school, but rather a literary agent in New York City.

In 2003, I had written a new-agey novel and sent it off to Hampton Roads Press, the outfit that originally published Neale Donald Walsch’s Conversations with God. However, when they turned me down they recommended I pitch my book to a certain literary agent in the Big Apple. He turned me down, too, but not before he read in my bio that I had freelanced a magazine article on antigravity.

“If you ever want to write a book about the New Physics, let me know,” my erstwhile agent told me.

Like an impoverished writer at a rich cousin’s wedding buffet, I dumped my novel and jumped onto the agent’s invitation, and within a few months I had sent him a 120-page draft.

However, he bailed on me because of something that many others in the publishing industry have also told me, namely, my New Physics book has TMR: Too Much Ramtha.

So, let me explain why I weave so much Ramtha into this work: Simply, Ramtha’s the smartest guy I know, and he has a lot of brilliant stuff to say on the subject of consciousness.

Time-after-time, Ramtha has filled-in the blank spots for me when other scientists ran empty. His view of how reality works – what consciousness is and what we’re doing with it – is so comprehensive that it captivates my attention. Hence, beaucoup Ramtha.

Yes, I know Ramtha’s controversial – he’s a channeled being and all that. But, regardless of how Ramtha gets here, his information has been important and relevant, and I have come to feel strongly that Ramtha deserves to sit at the table for this discussion, elbow-to-elbow with Einstein, Bohr, Schrödinger and all the other luminaries of science including the modern guys like Roger Penrose, Amit Goswami and Stuart Hameroff.

Therefore, I’m grateful that his school’s administration has granted me permission to present some of his teachings.

Now, for those who feel a bit queasy regarding the prospect of reading Ramtha stuff, I assure you this book is not about Ramtha per se, it’s about the science. The intention of this book is to present the hypotheses, speculations, findings and theories that comprise the New Physics, and my goal is to have any scientist reading it say, “Yup, the material is presented fairly.”

For those still feeling shaky, may I suggest that since the New Physics is so new – why not consider that such a young field can tolerate the inclusion of Ramtha’s model of science in the hope that the world receives a breakthrough perspective?

The world is already heading that way, in my judgment. As I write these words in early 2010 the cinematic world has just seen the release of the movie, “The Men Who Stare at Goats,” which deals with the applications of the theories of the New Physics by the military. Further, Dan Brown’s latest mega-selling novel “The Lost Symbol” features the workings of a fictionalized version of the very real Institute of Noetic Sciences in California and their research into the New Physics.

Another inspiration fueling my desire to write this book – back when I started in 2004 – was the movie “What the Bleep Do We Know!?.”

“Bleep,” is a documentary and drama that enjoyed a healthy response at independent movie theaters across the nation and it explores many of the central tenets of the New Physics. After having seen the movie, many acquaintances and family approached me with questions, so, to some degree this book is a companion piece to the movie even though “Bleep” now has its own splendid text titled, What the Bleep Do We Know?! – Discovering the Endless Possibilities for Altering Your Everyday Reality.

In 2006, “Bleep” has further expanded itself with the release, “What the Bleep Do We Know?! – Special Edition – Further Down the Rabbit Hole,” and I give heaps of gratitude to the producers for these magnificent research tools they’ve delivered to my fingertips.

However, the last piece to point me toward the New Physics and this book, and perhaps the most important, was the demise of a magazine associated with Ramtha’s school called The Golden Thread. I had been writing feature articles for the Thread along with a column describing personal accounts of Ramtha students applying his teachings to manifest the miraculous in their lives. When the Thread ceased publication and left me with a pile of unpublished manuscripts, I said to myself, “I’ll just make ’em into a book!”

Now, if you feel overwhelmed by the prospects of reading quantum physics and all its kin, don’t worry. I’m just a couple of steps ahead of you, and I’ll let you in on a secret. I had a lot of help writing this book. It was over my head in many ways, too, even after years of listening to Ramtha explain it to me. Nevertheless, I’ve got the information, and now, you can get it, too.

My secret is this: Mike Wright.

Mike used to be my editor at the Thread and has a strong background in physics. Plus, he’s a nice guy, so, as a result, we developed a strong working relationship. The chapter on human levitation and the aforementioned one on antigravity came into being with great assist from Mike, and in fact, the article on antigravity was in final proof just days before the Thread ceased publication.

So, when my interest turned toward a book on the science of consciousness it was natural to turn toward my old mentor. He’s been watching my back ever since and his fingerprints are all over this project.

So, with that background, let’s delve into the science.

Photo of the author, Bruce A. Smith, courtesy of Guustaaf Damave. 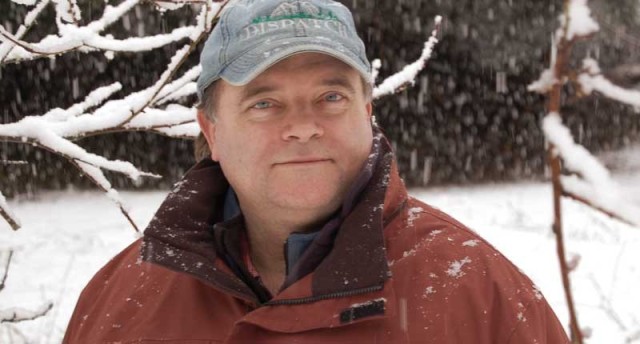 This entry was posted in Ramtha, Science and Technology, Spirituality. Bookmark the permalink.

3 Responses to What is the New Physics?