Special to the Mountain News

Mount Rainier National Park is closing public access to much of the eastern portions of the park due to extreme fire danger. The nearby Norse Peak Fire has exhibited erratic behaviors over the past few days due to changing winds patterns, and the NPS made the following announcement today, Friday, September 8, 2017:

The White River and Sunrise areas of Mount Rainier National Park remain closed due to the unpredictable fire behavior of the Norse Peak Fire. This fire is burning outside the east boundary of the park. The Sunrise Road is closed at the junction with SR 410 near the White River Entrance Station. Travelers can still drive the north-south route through the eastern portion of the park on SR 410 to Cayuse Pass and SR 123 to US 12.

Other road closures due to the Norse Peak Fire include SR 410 from Cayuse Pass east to the Bumping River Road, and Crystal Mountain Boulevard. A detour for SR 410 traffic over Chinook Pass is available via SR 123 and US 12 over White Pass.

Backcountry closures include all of the park trails and cross country zones on the east side of the park including the area from Frozen Lake to Panhandle Gap, and all of the trails with trailheads along SR 410 and SR 123 north of the Stevens Canyon Entrance. The Pacific Crest Trail is closed between White Pass and Snoqualmie Pass. Hikers in the park’s closed area will be contacted when possible. Folks who are planning on picking up hikers at trailheads within the closed area should contact the park at 360-569-6510.

A burn ban also remains in effect for the park, including all fires in the Cougar Rock and Ohanapecosh Campgrounds. Updates on the fire and additional road, trail and facility closure information can be found at https://inciweb.nwcg.gov/incident/5509/. 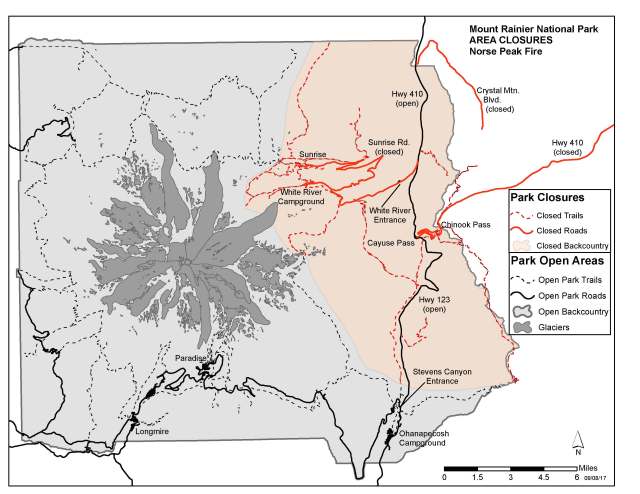 In related news, much of the smoke that contaminated the skies over Eatonville this week dissipated Friday as westerly winds entered the area. WAQA readings at 9am in Puyallup were 69, which is considered “moderately” safe. Surprisingly, the WAQA levels at the Paradise monitoring station inside the National Park recorded a very safe “16” at the same time despite the approach of the Norse Peak Fire.

Hopefully, Saturday’s forecasted rain will dampen all these threats. Nevertheless, most of the reported 86 major fires burning throughout the west are not expected to be extinguished until the rains of October soak the region.