2nd LD Representative Andre Barkis has responded to a series of questions from the Mountain News concerning the current unhealthy air conditions, and long-term timber management practices to control the increasing number of forest fires. The questions are posted at the end of the article, while Rep. Barkis’ comments follow below:

I wish I could give you a simple answer to how we can go about controlling these fires and the smoke that is inundating our area. I am afraid nature has more to say about this then I do.

I know we discussed the burns on JBLM. I am not aware that they are doing any controlled burns at this time. I would believe that with the severe air quality issues we are facing in the region they would hold off on any and all planned burns. As far as accidental fires on the JBLM property, that is a constant threat in the same manner it is anywhere in our region due to the extreme dry conditions and the amount of “fuel ” our forests and areas have that is conducive to fires.

The smoke we are once again experiencing is coming mainly from the fires in Eastern Washington and British Columbia. There are more than 60 fires burning in our region. When we get into these heat lows the air current pulls the smoke down the Frasier river valley right into Puget sound basin. Until the air pattern changes, which I hear might be this weekend we are flooded with the smoke.

These days of fire and smoke always coincide with our driest time of the year. In the last three years we have had this same pattern of drier and hotter than normal summers(August)

I know that there has been a lot of discussion and push from the various state entities to demand better management of our public forests, both State and Federal. I do not know what the situation is in Canada, but I imagine it is similar. Our public forests have not been well managed which has made them more susceptible to these type of significant fire events that we have seen and will see in the future if they are not maintained. The current administration at DNR is doing a better job recognizing and addressing this issue.

Up until last week we were thankfully being spared significant fires in the region and the resulting smoke. Last weekend(Friday- Sunday) a low pressure system came in bringing much needed rain and cooler temperatures but unfortunately also Lightning.  The storms sparked many fires in the northwest region, several of significant size. The result is the smoke that poured in over the last few days.

I will continue to advocate for better forestry practices by our State. I suggest you contact JBLM ( you probably already have) and inquire about their burns and status. You can file a complaint or better yet reach out to Congressman Hecks office as it is a Federal installation.  I would not support a class action law suit against JBLM as it is again a federal issue and also I do not believe the significant source of the poor air we are experiencing due to the fires.

Let’s hope the weather changes and the smoke dissipates soon.  I know the effects personally, and the effects on my own family.

Thank you for reaching out to me.

Original post on the smoke and air, published Tuesday, August 14, 2018:

Eatonville residents were treated to a rare view on Tuesday, August 14 – Mount Rainier was invisible even though the sun was shining without a cloud in the sky. The culprit: smoke from regional forest fires.

It is believed that this current inundation of smoke is due mainly to a sudden eruption of numerous large fires on the eastern slopes of the Cascades, ignited by lightning strikes that accompanied the rains of Saturday and Sunday in Western Washington.

This post will be updated over the next few hours and days as more information becomes available on the smoke, weather forecasts, and health concerns.

In the meantime, fires are burning at historic levels in California, Montana, and elsewhere, adding to the particulate loads in the atmosphere from Eastside blazes and other local burns. As recently as last week, Joint Base Lewis and McChord was reportedly burning segments of its wildlands as part of its timberland management program, a process that has angered and sickened many area residents for years.

Air quality on the Eastside is “atrocious,” to use the adjective uttered by one resident, and official “WAQA” (Washington Air Quality) readings for skies east of the Cascades are in dangerous unhealthy levels of 200-300, with conditions worsening. A late-night mobile reading near Moses Lake read 304, a “hazardous” level.

Mid-day local readings for the Puget Sound Basin were at “unhealthy” levels, such as the 168 reading posted in Puyallup at noon today, and a “very unhealthy” 228 at midnight. A WAQA reading for healthy air is 0-50.

WAQA monitors all types of impediments to air quality. Smoke contributes most of the most noxious elements of pollution, such as “particulate matter,” which are teeny bits of ash, grit, and unburned wood. These contaminants can cause serious lung disorders by inflaming tissue and introducing diseases in the human airway as bacteria, viruses, and fungi “piggyback” on the tiny bits of particulate matter. To counter these irritants, health officials recommend using a filter mask, especially the N-95 mask available at most hardware stores for less than $10.

Other contaminants in smoke can be gaseous “aerosols,” or the chemical fumes produced by the burning of wood. Additionally, these gases can form dangerous acidic compounds in the sky as they combine with moisture and other pollutants, and are thought to be the main source of the irritating “haze” that has pestered our skies and lungs over the past few weeks. These aerosols are believed to be emanating from the huge fires of California because the extreme heat of those forest fires – often over 1,000 degrees – drives the gases high into the atmosphere, where they can drift for hundreds of miles.

Besides particulates, WAQA stations pay close attention to the formation of these gases, specifically ozone, another by-product of high-heat wood burning.

Below are pictures of Mount Rainer, taken today by Julie G. at 2 pm from downtown Eatonville. 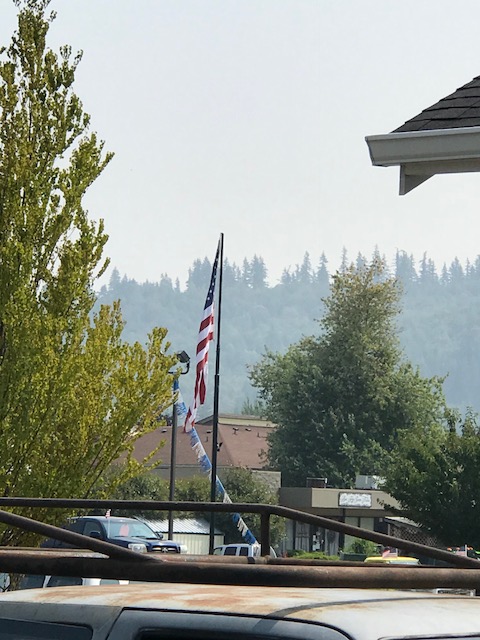 Normally, Mount Rainier would be visible in this picture. It is only 40 miles away, yet the smoke from numerous local and regional fires obscures it.

Mount Rainier, as seen from Pulford Road in northern Eatonville, on a typically clear day. Picture taken on September 27, 2015.

The following email has been sent to the 2nd Legislative District legislators: Representatives Andrew Bakis and JT Wilcox, and Senator Randi Becker.

We seem to be losing our ability to control forest fires and the smoke they create. Today, Mount Rainier was invisible from downtown Eatonville.

We discussed this issue at length last summer so, I ask you now:

1. What is your official comment now on controlling fires and the threat of smoke to healthy living in the 2nd LD?

2. What have you done to improve public health and safety since last summer when we had 22 days of unhealthy air out of the 44 days running from August 1 until mid-September?

3. What needs to be done to control the burns at JBLM? They continue to let unplanned fires burn themselves out in ordnance and live-shooting ranges, and the controlled burns for habitat management seem to continue despite their assurances that these programs are being conducted in a safe manner?

4. Will you support a class-action suit against JBLM regarding their burn practices in order to maintain public safety? If not, why not?

This entry was posted in Environment, Mount Rainier, Smoke. Bookmark the permalink.