The 48th Anniversary of the DB Cooper’s iconic skyjacking is upon us, and many in Cooper World are preparing to celebrate by attending CooperCon 2019 next week.

Cooperites will be gathering on Saturday, November 23 at the Kiggins Theater in Portland, Oregon to hear a bevy of experts on the Cooper case, along with several individuals who are connected to the skyjacking by being family members of the crew, or were residents of Portland scanning the skies as DB Cooper flew overhead on his getaway flight.

Besides the presentations, festivities will also include an optional – and free – Road Tour of the locales cited by the FBI as likely landing zones. In addition, if weather permits, CooperCon 2019 organizer and host, Eric Ulis, will skipper a pontoon boat float down the Columbia River to Tina Bar to see where some of the ransom money was found in 1980.

Here’s the itinerary for the Road Trip:

We will meet at the Shari’s in Orchards, WA at 1 pm. Shari’s is a restaurant in the Fred Meyer shopping mall at the southeast corner of 76th and 117th. The latter thoroughfare is also known and posted as State Route 500/503.

Orchards is where the FBI thought DBC jumped in its 1975 revised analysis, putting the new LZ in the Hockinson area, about 3-5 northeast of Orchards.

Orchards was rural agricultural lands in 1971, but now it is a fully integrated part of the Portland-Vancouver metroplex. But Hockinson is just beyond the reach of those urban encroachments. In fact, Hockinson is now the bedroom/playground community for the very wealthy of SW Washington.

To reach Hockinson, first we’ll leave Shari’s and head north on 500/503 to their junction, then turn east on 500 and continue approximately five miles to 182nd Avenue. There we will turn north and head to Hockinson.

The countryside of Hockinson is lovely. It will really surprise many Cooperites, I believe, as it did me. It looks today very similarly as it did in 1971. Large dairy farmlands, no major hills, gentle rolling terrain. It looked ideal for an LZ.

From Hockinson we will motor north, and then west back to SR 503 in Battleground, which is the original jump-off spot, and travel northeast along 503 to Amboy, the initial LZ. There we will leave 503 again and explore the forestlands along Cedar Creek Road where the initial ground search began on November 27th and continued until Sunday, November 29.

Next, we’ll travel to a local’s home and antique store on Pup Creek Road – just north of Cedar Creek Road – to hear her account of the intense house-to-house search for DB Cooper in that neighborhood conducted by the FBI in early December, 1971.

Afterwards, folks will have to make a decision – travel 25 miles northeast along SR 503 to Lake Merwin, the Dam, and the Ariel Tavern, or join me and other hungry Cooperites and head along the southern flank of the Lewis River via Cedar Creek Road to Woodland and arrive at La Casa Tapatia for dinner. Note: LCT is on 503, too!

After din-din, the intrepid can travel east on 503 for 12 miles to the Ariel Tavern and the Merwin Dam complex. That’s an easy drive compared to the circuitous route on 503 from Amboy, which will take at least 30-40 minutes of curvy, mountainous driving. The area east of Lake Merwin can be quite rugged.

Map of the Road Tour 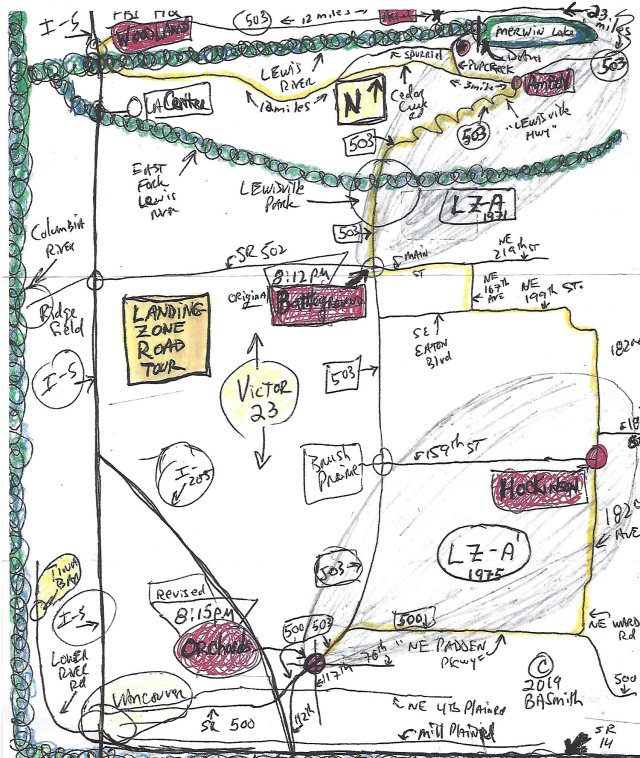 As for an author’s lament….

Feeling the Cooper Fever, I decided to sing a song about my experiences as a DB Cooper researcher and author. With profound apologies for its primitive recording value, I offer it at YouTube, nevertheless.

In addition, here are the lyrics:

The Mystery of DB Cooper

The night before Thanksgivin’, DB Cooper did a little skyjackin,’    F- G

After getting his cash and parachutes, he got his show on the road.

On a deserted runway down at Sea-Tac, he let his passengers go.

But, DB, DB, DB Cooper where did you go?

DB, DB, DB Cooper can you give us a clue?

The FBI’s officially closed the case, so, whaddaya say, Dude?

DB, DB, DB Cooper can you give us a clue?

None of the witnesses are talking to me, so now I’m talkin’ to you!

DB, DB, DB Cooper, can you tell us your name?

Down in Portland you told Northwest that your name was “Dan”

The “DB” came from a mix-up between a TV reporter and a G-man.

Is this part of a cover-up, or just governmental negligence?      Em-G

CooperCon 2018: Author on left, Eric Ulis on right, and parachute expert Mark Metzler in the middle. This photo was taken at the Victor-23 pub in Vancouver, where Cooper aficionados will be gathering yet again on Friday, November 22. They will also be treated to a LIVE performance of “Singing DB Cooper.” 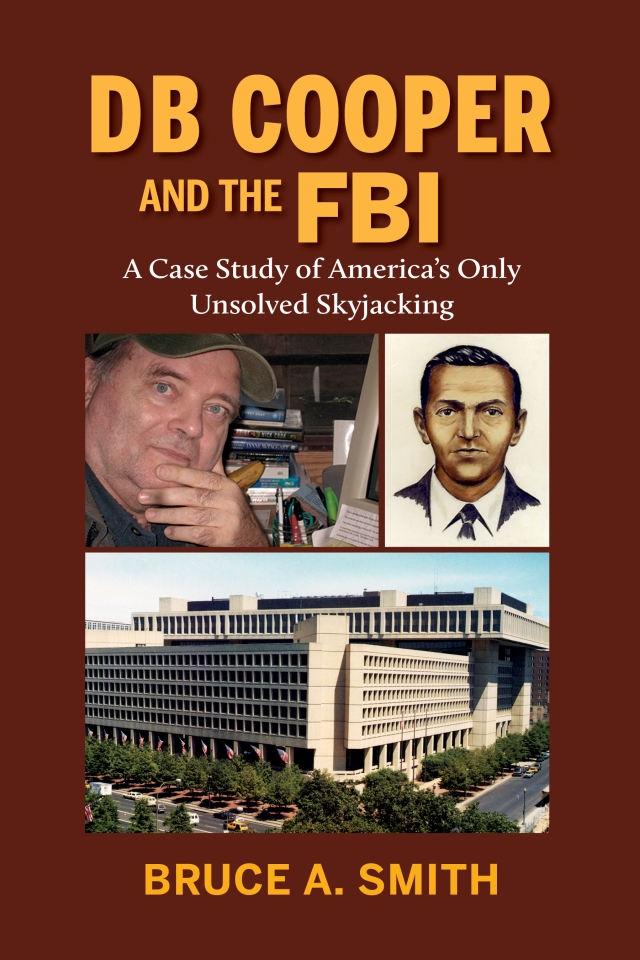 This entry was posted in DB Cooper, Entertainment. Bookmark the permalink.