Panic buying came to Eatonville today. The bread shelves had two loaves – both whole wheat. I took one. Then, I turned towards the nearby Deli section and asked the gal behind the counter when the next shipment of bread might arrive.

“Tomorrow at 10 o’clock. Better get here, then. These shelves were stocked full this morning – now look at ‘em,” she told me.

“Yeah. People have been coming in all day long. Really loading up.”

Fortunately, the woman had plenty of deli meats to sell, so I selected a pound of smoked turkey breast for sandwiches.

Down the next aisle, I was further stunned to see only a few packets of frozen, cut-up chicken.

“What’s the story with the chicken,” I asked the butcher behind his counter window.

“The delivery just didn’t come today,” he said. “The warehouse told us they just couldn’t ship it, but they’re gonna try again on Wednesday.”

I took a packet of frozen chicken breasts instead of the whole, fresh roasters I usually purchase, and with my selection there were only three packets remaining in the whole chicken section.

Beef and pork were the same. No hamburger. No pork chops. A dozen packets of expensive steaks at 12 bucks a pound. I passed.

More shocked awaited me as I passed the dairy section. No yogurt. Only a couple pound-boxes of butter. Fortunately, they were salted and I bought one.

Yikes, this is getting serious. I had never been part of a panic buying spree before. I began to feel anxious. Better head to produce, I said to myself.

No carrots. Yee-Gawds, as my Aunt Teddy would say. Specifically, there were no fresh, separate carrots, but they had a few 5-pound bags off to the side. I grabbed one. At least I have a couple bags of potatoes from my garden, I mused. I’ll slow-roast the chicken breasts with my potatoes and these bagged carrots.

No bananas, either. You-gotta-be-kidding-me. Not seeing ANY bananas unnerved me. Before my fear deepened, though, Curley-the-Produce-Guy, arrived with a whole cart-load of the yellow delicious. We began talking, and Curley was as eager for social conversation as I was.

“What’s the story with the produce, Curly?” I said. “No carrots?”

“We’re out of a lot of things, and some things we won’t be getting, especially anything that comes from outside the United States,” he said as he dumped three large bags of bananas into the fruit bins.

“This may be the last we see of bananas for awhile, then?”

“Yup. And not just bananas. A lot of fruits. Plus, we get a lot of our pork from Australia and New Zealand. That’ll be impacted by the travel bans. We’ll only have produce that’s grown in the US, like apples, onions, potatoes, and a few other things.”

“Whew. Things are gonna be different,” I replied.

“You got that right.”

Next, I headed to the frozen vegetable cases. They were almost empty, unless one desired lima beans or okra. Or corn? Nobody likes corn? Hmmm. But hidden behind the bags of corn were a few bags of peas. I bought one.

I cruised the aisles to see if there was anything else I needed or wanted. The empty shelves were shocking and revealing. Most telling was the Bakery Section, which was wiped clean. No flour, cakes mixes, sugar, or frosting mixes. I guess all those kids home from school are gonna learn how to bake a cake this week, I mused.

No crackers, either, on first glance. But down on the lowest shelf, in the back, I found a “Family-Size box of saltines. Yippee! When the bread runs out, I’ll still have something for my sandwiches.

I headed to the check-out. Every line was filled with customers, reminiscent of the day before Thanksgiving or Christmas. I selected the line that had a check-out gal wearing latex gloves.

“Glad to see you’re protecting yourself,” I said when I got to the register.

“I agree,” I replied. “But I would be more assured if you also had a sanitizing bath you could dip your fingers into between customers so that my stuff isn’t contaminated by what you touch from other customers.”

“I hear ya. We sanitize a lot, though. We have someone come by every hour or so to wipe down the key pad for the debit and credit cards, and the areas that you touch.”

“We have plenty of food though,” she continued. “That’s the important thing – we’ll be here for ya. We’ve got lots of pallets of food on the loading dock right now waiting to be put on the shelves, but the crowd has been so non-stop all day, the boys haven’t been able to keep up.”

Next, I drove to my pharmacy for a prescription, and again I saw an elevated measure of protection. As I approached the check-out, Laurie, my favorite clerk, wiped down the counter and the key pad, and even the digital pen that I needed to use to authorize my prescription.

“Thanks, Laurie,” I said. “It’s reassuring to see you taking care of business here.”

“No one wants to get sick, Bruce. We all have to be careful.”

On the way home I heard on NPR radio that the first round of Covid vaccine trials began today in Seattle. Reading later about that important milestone, I learned that this week we’ll see 45 young, healthy individuals be injected with the vaccine – not to see if it works – but rather to see if it triggers any side-effects. Officials say the vaccine is still 12-18 months away from giving us relief from Covid. Oh, well. It’s a beginning.

When I got home, I was amused to read in a press release from the Pierce County Health Department that a local distillery, Chambers Bay Distillery in University Place – just outside of Tacoma – was shifting part of its production from making bourbon and vodka to hand sanitizer. Plus, they were giving bottles of it away for free. That’s why I love Tacoma!

People are beginning to ask, myself included, “How long in isolation?” My journalism colleague Steve Klein wrote to me last night saying, “4-5 weeks.”

I told my theatrical director, Stephanie, today that I figure I’ll be in isolation – and thus out of direct rehearsals – for at least the next two weeks, and probably another 2-3 weeks after that. That means Skype, Zoom, and conference calls until mid-April.

“Have you thought about postponing the whole project?” I added, and she indicated that she had.

“We’ll play it by ear,” she said. “The important thing is to keep everyone safe.”

The whole world is shutting down, and things are going to be very different for the next few months. Who knows if we’ll ever go “back to normal.”

“I hope my Covid story is boring and uneventful. It hasn’t hit my hometown in Tennessee yet, but everyone is still taking precautions and raiding grocery stores. I haven’t felt too uneasy about it until today. Right now, I’m in a hotel outside of Jersey and I have to work in Long Island tomorrow, and unlike my little hometown, Covid has absolutely made it’s presence known on Long Island. I stopped and got a room here so that I wouldn’t have to go into New York until the morning. I don’t want to go then, and I think it’s kind of shitty for the plant that I’m going to to be bringing me in with all of this going on. Hopefully, Mr. Covid don’t hitch a ride with me back to Rocky Top.”

In terms of the larger world, the stock market fell another couple of thousand points today, and even President Trump is publicly saying that everyone needs to isolate, wash hands, and those out in the world should not be in any groups bigger than ten individuals. A week ago, he was telling people to go to work and Covid would disappear soon, “like a miracle.” Perhaps the real miracle is that Trump is getting real. 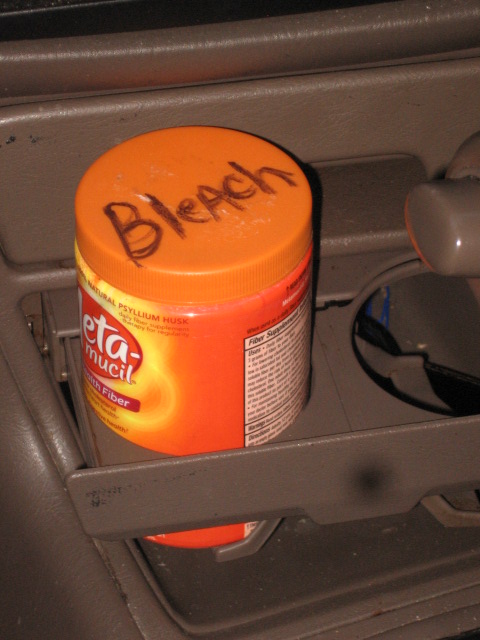 My little bleach-bath container sits in the coffee cup holder of my car. It’s essential for my trips into town and the grocery store. 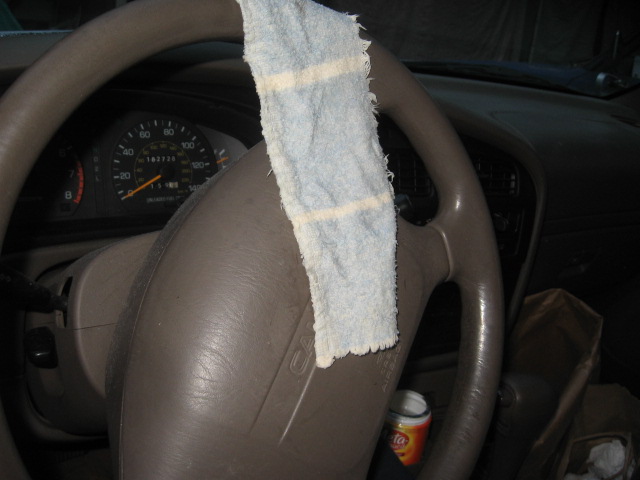 My bleach “schmata” wiping down the steering wheel. I also do the keys, door handles – inside and out – the shifter and anything else I might touch after getting in after being in a store.

The second snow that fell a few days ago.

Part of my garden, in the snow from a few days ago. I’m still eating potatoes from last year’s harvest. In the next week or two I’ll be planting this year’s crop in the ground, and kale will go in the containers. Hopefully the snow and cold didn’t affect these apple trees, shown in the back.