“It’s our complimentary gift to the community,” said Sound Life’s community pastor, Edwin Comstock.  “It’s a lot of fun, too.”

Pastor Edwin said that the church funds nearly all the expenses for the Eggstravaganza, including the candy and prizes filling the estimated 40,000 plastic eggs.  He also indicated that Eggstravaganza is the largest Easter Egg Hunt in the county.

“That’s what we hear,” Pastor Edwin said with a laugh.

Besides the egg hunt, the children were able to ride ponies, get their faces painted, and romp through several jump houses. 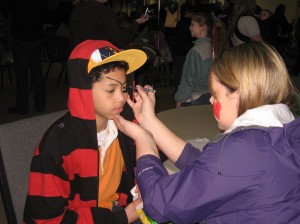 There were also several community exhibits to view, such as a wonderful old-time encampment replete with an active iron forge and metal-working set-up presented by Post 2 of the Royal Rangers, a boy-scout-like group of young men who are sponsored in their national youth organization by the Sound Life Church.

In addition, the Frederickson-Clover Creek Community Council had an exhibit highlighting their efforts to bring the Stan and Joan Cross Park into reality.  Further, along with the Frederickson Business Connection, they co-sponsored the appearance of the Easter Bunny, who welcomed the young and old to pose with him in a picture. 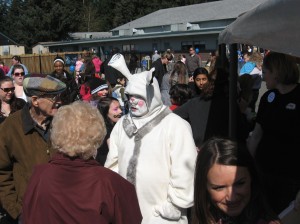 During the festivities, country music blared over the PA, inter-sprinkled with Christian messages, and several food vendors managed a brisk business.

As in other large-scale egg hunts, the Eggstravaganza was held in an adjoining large field, with separate sections for various age groups of children.

However, very young kids had their own separate egg hunting areas, with crawling infants placed in the church’s sanctuary while toddlers up to 23 months had a spacious court yard to themselves. 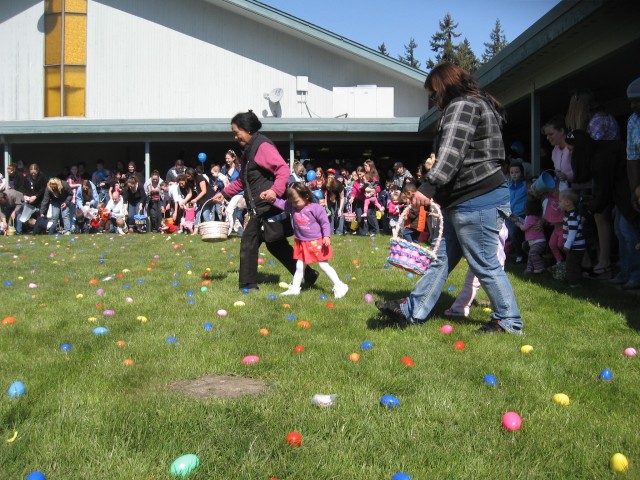 Toddlers, accompanied by their parents, had their own courtyard.

Along those lines, the start times for the egg hunts were staggered so that parents with children in separate locations could cheer all their kids.

Also, Sound Life instituted an important change that other egg hunts should adopt – all the older kids scrambled for their eggs by themselves, without adults.  This rule seemed to minimize the congestion, and also eliminate any possible danger of adults stepping inadvertently on the hands of children reaching for their eggs.

Heedless of those kinds of safety issues, the kids were excited to participate in this newly emerging cultural phenomena of celebrating Easter and spring in a large community fete.  The buzz was palpable in the massive crowds waiting for the start of the main event, and the kids pushed against the boundary ribbons in an expectant but respectful manner.

When the field mangers gave the signal, the kids flew off to gather eggs.  A few minutes later it was all over, with the acres of green grass picked cleaned of any plastic remnant. 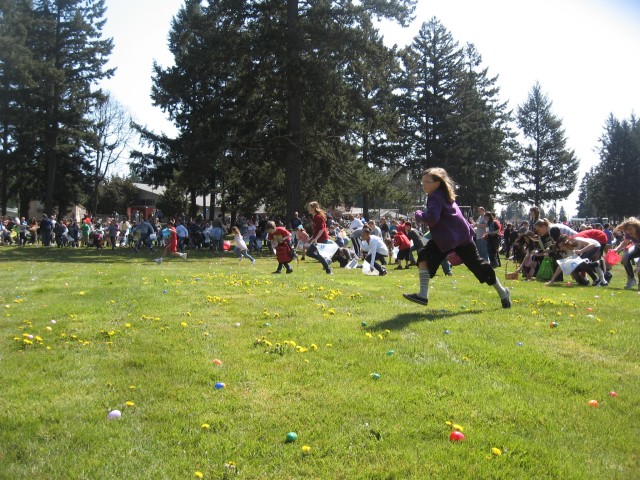 “It’s crazy – it’s like Halloween compressed into three minutes,” laughed Ron Gunnells, one father in the 10-12 year old section.  “And I wish they could clean their rooms like they did this field!”

But then, a second ritual commenced – the egg openings and resulting comparisons between siblings of the size of their goodies haul.

Sitting on the fields bathed in sunshine, dozen of families camped out as the children opened the plastic egg containers, told excited stories of their short-but-intense adventure, and gulped down candies. 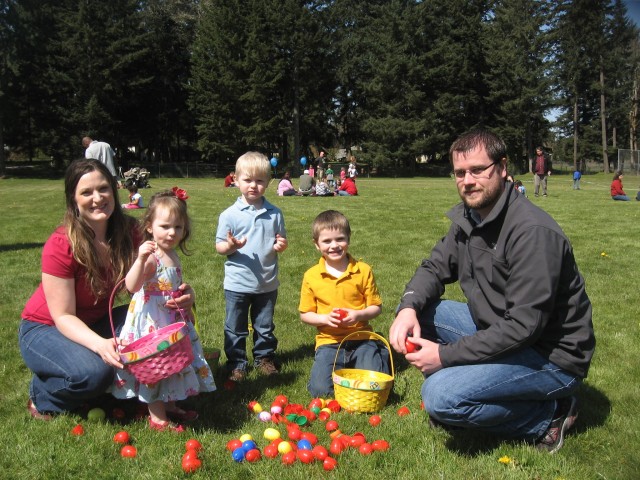 Afterwards, the fortunate ones who had found a prize ticket in their eggs, headed towards Eggstravaganza Central to make a selection between a game or toy, like a hula hoop, a Nerf football, or a coloring book.

In one tender scene, a girl about eight years-old, chose a small game that was impossible to discern because she clutched it so closely to her chest it was as if Christmas had arrived and she had just received a gift from Santa Claus himself. 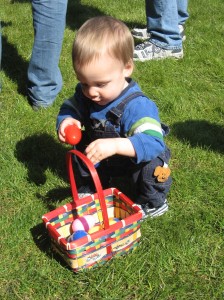 “It’s always been a lot of fun,” said Pam Hegedus, who has been at most of the Eggstravaganzas of the past quarter-century.  “I was here in the beginning and I missed about six years when my kids were teenagers, but now I’m back with the grandkids!”

Dramatizing her statement, Ms. Hegedus turned and introduced her niece, Shanna Sawaya, who was pushing a stroller with her six-month old daughter, Cheyenne, inside.

“Yup, it’s a new generation coming to Eggstravaganza,” said Ms. Sawaya.  “I was here as a kid, and now I’m bringing my own.” 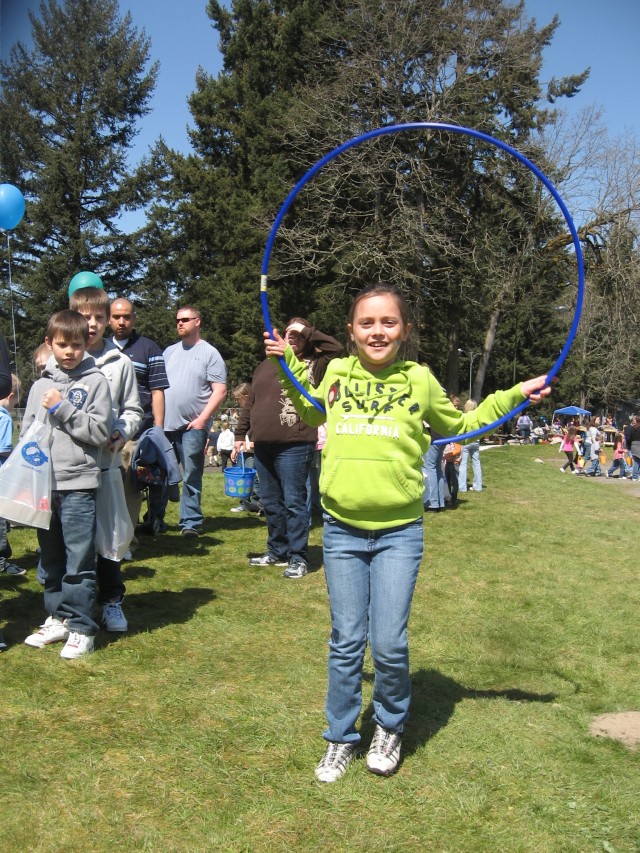 Gabriela Gorash enjoying her hula hoop, her prize from the Eggstravaganza Egg Hunt. 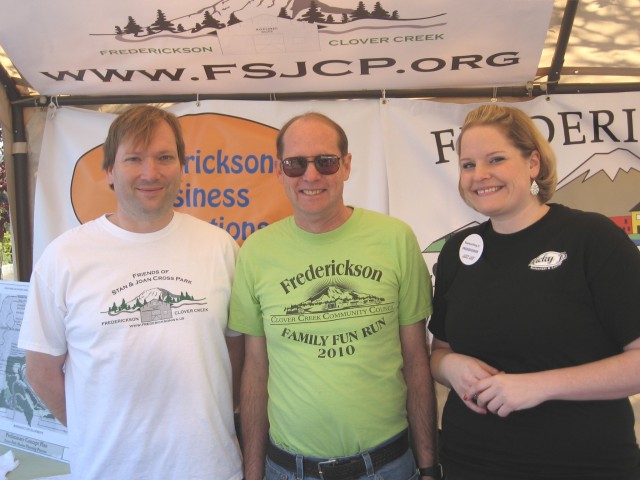