Editor’s Note:  The following press release from author Geoffrey Gray heralds the first-ever professional gathering that will examine the DB Cooper case – the only unsolved skyjacking in the history of the United States.

Forty years ago this week, DB Cooper jumped out the aft stariwell of a Northwest Orient 727 with $200,000 tethered to his waist and was never seen again.  Further, his identity is still unknown.

Includes a charity auction of a $20 bill from the hijacker’s ransom found in a riverbank more than three decades ago. 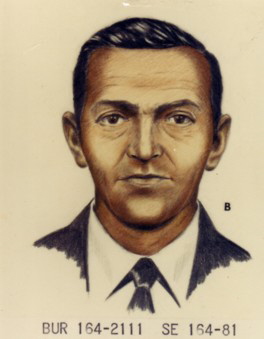 New York Times bestselling author Geoffrey Gray announced the line-up today for the national D.B. Cooper Symposium, a one-time event that will feature groundbreaking presentations from Cooper sleuths from around the country, and crack open new leads to the enduring mystery.  This Thanksgiving Eve marks the 40th anniversary of the D.B. Cooper case, the world’s only unsolved hijacking and a mystery that has spurned one of the nation’s largest manhunts.

“There is no better way than to work off Thanksgiving dinner by getting back to work on the Cooper case,” said Gray, author of SKYJACK: The Hunt for D.B. Cooper. “Here you will have for the first time – and likely the last – the most dogged, devout and informed Cooper sleuths, all of whom have come together to answer once and for all, forty years later, who was D.B. Cooper.”

“Nowhere on the planet has a more eclectic group of sleuths assembled in the same room to solve such a puzzling and obsessive whodunit.”

Gray also announced there will be a charity auction of an original Cooper bill that was given to the hijacker during the flight as ransom, and found nearly a decade later in a riverbank by an eight-year-old boy.

“If you think you have everything, think again,” Gray said.  “There are only a few Cooper bills left, and this is the chance of a lifetime to own a historic clue to America’s most daring unsolved crime.”

Starting at 9:00 am at the Portland Hilton (921 Southwest Sixth Avenue), on the morning of Saturday, November 26th, the Symposium’s presenters will include Marla Wynn Cooper, an Oregonian now living in Oklahoma City, Oklahoma.  Cooper will talk about her uncle Lynn Doyle Cooper, who the FBI recently deemed their “most promising” lead in the Cooper case.  Ms. Cooper made headlines this summer when news about her uncle broke around the world.

Editor’s Note:  LD Cooper was later dismissed as a suspect in the skyjacking as his fingerprints and DNA did match the samples the FBI had on file.  This begs the question of why the FBI proclaimed him their “most promising” suspect prior to this  introductory level of investigation.

Arizona paleontologist and Burke Museum researcher Tom Kaye will present “Cooper: Did He Live or Die?” the findings of an intensive three-year investigation into the Cooper case.  Kaye worked with the FBI to examine physical evidence and concluded that Cooper survived the jump.

Editor’s Note:  Tom Kaye and his team have found shards of very rare titanium sponge on the tie left DB Cooper left behind.  In addition, they have new information on the soils of Tina’s Bar, where the $5,800 worth of ransom money was discovered in 1980, casting new light on the find.

DB Cooper's clip-on tie and shards of money. Picture courtesy of the FBI.

Retired FBI Special Agent Ralph Himmelsbach, who chased Cooper in a helicopter on the night of the hijacking and for nearly a decade after at the Bureau’s Portland Field office, will talk about his pursuits of the hijacker, along with veteran Cooper hunter Jerald Thomas, who has been searching the woods in southwest Washington for Cooper’s bones for more than two decades.

Veteran parachute jumper Mark Metzler, and the infamous Cooper sleuth known in cyberspace as 377, will present “What Color Is Your Parachute?”  Parachuting out of planes for more than four decades, Mark had a chance to jump out of a DC-9 and made nearly the same jump Cooper made.  He will discuss why Cooper may have been a more experienced skydiver than some FBI agents think, and how the CIA’s secret 727 airdrops in Thailand during the Viet Nam war could have inspired Cooper.

Award-winning artist Carol Abraczinskas and resident illustrator at the University of Chicago will present “Dan Cooper: the Comic in Translation,” a study of the French-language comic book that likely inspired the hijacker’s mysterious alias.  For the first time, Abraczinskas will detail the similarities between the actions of the French comic book hero and the hijacker.

Airplane mechanic Ron Forman and writer Pat Forman, authors of The Legend of D.B. Cooper: Death by Natural Causes, will present “Our Friend Barb,” a discussion about their relationship with Seattle librarian Barbara Dayton, who underwent sexual-reassignment surgery before the hijacking and later confessed to the Formans that she was DB Cooper. 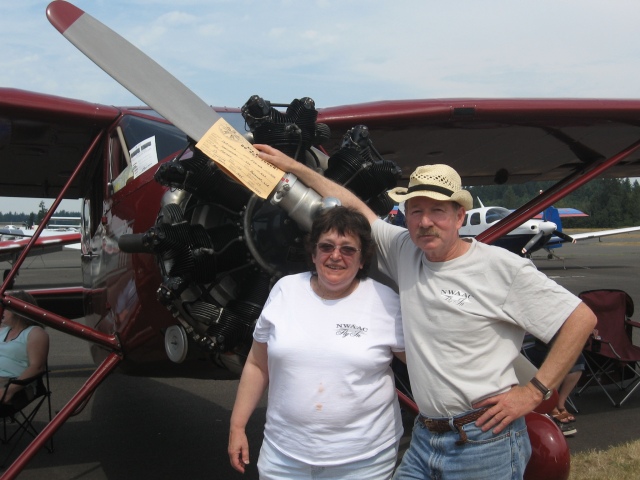 Ron and Pat Forman at an air show at Thun Field in 2008, immediately after the release of their book on Barb Dayton and her confession.

Editor’s Note:  Accompanying the Formans will be Rena Ruddell, Barb Dayton’s daughter.  She will be answering questions about her views on the skyjacking and also discussing fascinating life of her father, known as Barb Dayton .

Portland historian Doug Kenck-Crispin will present “Bourbon, Bennies, and Twenties; Rock and Roll and D.B. Cooper,” examining the Cooper tale as a Northwest phenomenon, through its presentation in music.  Portland musician Kerry Hallett will also strum a few Cooper-inspired melodies on her banjo.

In addition to these presentations, the Cooper sleuths will answer questions about new leads in the case.  Gray will also announce the winner of the D.B. Cooper poetry contest, still open for submissions.

The Symposium will conclude with the auctioning of one of the last complete and legendary Cooper bills, the actual booty from the hijacking that was found by young Brian Ingram on the banks of the Columbia River in February 1980.  Brian Ingram will lead the auction, from which the proceeds will go to charity.

Brian will also be on-hand to discuss his legendary find and collection.

The symposium is free, although donations will be accepted.  Rooms at the Hilton are $79 per night if one mentions their attendence at the symposium.

Editor’s Note:  Yours truly will be covering this event and will file a complete report for Mountain News readers shortly after its conclusion.  After the symposium, participants will be heading 40 miles north to Ariel, Washington to join in the festivities at the 40th Anniversary of DB Cooper Daze, held every Thanksgiving weekend at the Ariel Tavern, located at the center of the 1971-72 ground search for DB Cooper.  – BAS. 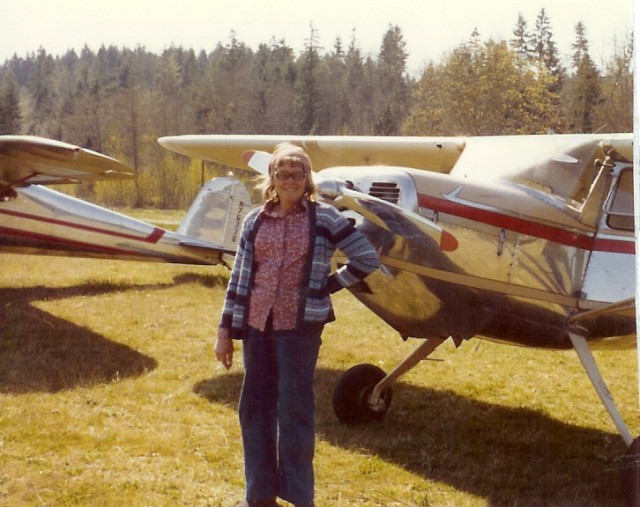 Barb Dayton, standing next to her Cessna 140 at Thun Field.

This entry was posted in Culture, DB Cooper, Events. Bookmark the permalink.