It’s been two full days since Sandy slammed into the New York-New Jersey coast and the impacts are both local and national, physical and emotional, at a scale few have ever experienced before.

Most of my family is Back East, and I lived on Long Island for forty years before I moved to Washington.  Plus, I was a commercial beachcleaner in New York and New Jersey for eight years, and I have worked or walked upon every beach from Montauk to Cape May, so this storm touches me deeply.

I don’t think the enormity of Sandy has fully sunk in, and the people whom I have talked with or have seen interviewed on TV are resolute and upbeat, but the destruction is so wide-spread that I think it might take a year of hard work to get the region back close to normal.

That said, I am astonished but pleased that so many folks from the Pacific Northwest are responding to the needs of their countrymen in the east, and this update starts with an announcement from the Pierce County Department of Emergency Management about the local effort to send Washington Task Force 1 (WATF-1) back east and lend a hand.  WATF-1 is our premier search and rescue team, and they generally attend to earthquakes and terrorists attacks but they are getting lots of experience with hurricanes after a deployment to Katrina and now Sandy.

This update will also include a family report, an insider’s look at how people are coping in the zone of destruction that Sandy has left behind.

But first, the county’s press release announcing the departure of WATF-1, which is mainly composed of elite firefighters and police from Pierce and King Counties, and God bless you guys:

“Washington State Task Force 1 (WA-TF1), one of 28 Federal Emergency Management Agency (FEMA) urban search and rescue teams in the nation, was activated today to support rescue efforts on the east coast.  The Task Force will be assisting local responders in areas hard hit by Superstorm Sandy.  The Task Force has been readying itself for the past two days, and was put on alert Tuesday for possible deployment.

“Processing of the team members will take place at the Department of Emergency Management, 2501 S. 35th St. in Tacoma.  Team members are currently being processed.  It will take 4-6 hours to process all team members.  Local media are welcome to view the preparations.

“The Washington Task Force 1 (WA-TF1) was established in 1991 and currently has 36 different participating agencies from three primary jurisdictions, Seattle Fire, King County and Pierce County. The Task Force comprises over 210 team members, drawn from a variety of organizations including fire departments, hospitals, law enforcement and public works agencies in the City of Seattle, King County and Pierce County.”

I just spoke with my mom for the first time since the storm hit her mid-Long Island home on Monday afternoon.  She is okay, and the power came back at the 50th hour of her ordeal.  She told me she was counting the minutes until the lights and heat came back on, and she wept when telling me how grateful she feels.

“Thank God for those men from Ohio,” she exclaimed, as the work crew who put her neighborhood back on line was a team from a public utility in Ohio.  One fellow even stopped to chat with her and reassure her that the power would be coming on soon, “possibly tonight” when he and this crew went through the backyards along her street to check the house-to-house power lines which run behind the residences and not along the roadways in that section of her town.

No major trees were down on her street, apparently, although a big one was down on a major thoroughfare known as New Hyde Park Rd, “just north of the train tracks.”  The Ohio guys told mom that it was a feeder line and she surmised that once the central power was on the local lines on the street were relatively easy to fix.  In fact, she got power about an hour or so after the Ohio men came through and inspected the local lines.

Mom was also effusive in her praise of next-door-neighbor Lou, who came over 2-3 times a day and “risked his life in the storm” to do so.  Okay, a little histrionic I suppose, but hey, Sandy is a new experience for all of us.  Yeah, Lou!  Who also had a gas stove and hot tea.  Mom was getting cold and was sleeping with all of her clothes on.  Plus, she’s 88.

Mom’s 84 year-old friend Bob had come over today too, before the power returned and they went to the Raindew variety store in the local shopping district.  There was no power in the store, so workers met customers on the sidewalk where it was light enough to do business, and they took orders for stuff such as cough medicine and aspirin, made change – cash only! – and went inside with flashlights and fetched the item.  Mom’s cold doesn’t sound like it got any worse in the duration.

Mom and I talked at length about Breezy Point, where the 111 homes burned down because firefighters couldn’t reach them due to the flood waters.  My family and I loved Breezy Point, and we spent wonderful times down there with our family friends who owned a home there.  I also worked at Breezy Point as a beachcleaner, and I know so many of the people who lost so much – from Breezy Point through the Rockaways to Atlantic Beach, Lido and Long Beach, and out to Jones Beach, Fire Island, and the Hamptons.  Such a devastating loss to so much natural beauty, and a stunning blow to the shepherds of that splendor.

As for New York City, I don’t think they fully comprehend how much destruction has occurred to the subways and tunnels.  How NY protects itself may result in Manhattan looking like a mini version of Holland in the near future.

My cousins, Gay and Justin’s 89-year old mom is staying with a long-time friend in downtown Manhattan and has good company; but she left an area of power as it later turned out, to reside in a place that still has none.  Gay, who lives on the Upper East Side and has power, told me she invited her mom to come uptown with her but that she declined.  Gay also says that her brother Justin is coming into town from Gawd-knows-where and will help get their mom, my Aunt Dottie, settled at her home in mid-town.

I finally spoke with BJ after trying unsuccessfully for two days, and most of that time I couldn’t even get a connection let alone a phone company message saying that “All circuits are busy, please try later.”  BJ works with psychiatric patients, who needed her care despite the calamitous conditions around them, and she sounded “chipper,” as my mom might say.  BJ was heading home from work when we spoke, planning to stay with her grandkids in their new apartment in Glen Cove, which has power and she doesn’t.

BJ’s daughter Lauren, my step-daughter, has been giving me regular reports about that side of the family, as Lauren had power throughout the storm in her apartment complex in Queens.  Lauren had told me that if I hadn’t had heard from my mom by Thursday that she would try to trek to her home and see what the situation was, despite the reports that the roads are jammed and traffic is a snarl.

As for Lauren’s sibs in Jersey and PA, I haven’t heard a word yet.

Friend Valerie’s dad in Massapequa, located in the south shore of LI near the flood zone, is okay and got power back a few hours ago.  Wow!  Valerie’s sister-the-cop, is on duty and sounds harried.  Val’s sis apparently had enough time, though, to swing by their father’s and witness her 90-year old pop out on the street with a chain saw taking care o’ business on a downed tree.

My sister Barb said she was okay in an email to me Monday night when power came back on after a short outage Monday afternoon.  But I haven’t heard from her since then.  Mom said she would try to get through to her and ascertain what the situation is in Boston, which had plenty of rain, wind, and four feet of storm surge.

No word on Sis’ bf Mark in Brooklyn, although I’ve tried calling a few times.  I think he’s okay, as his home’s a’ways from the flooding.  Besides, the guy worked for UNICEF and lived in Bangladesh for 13 years, so what’s a little rain….

My friend Ronnie D from the old neighborhood, has a nephew PJ in Long Beach, about twelve miles due south of my mom and sitting directly on the ocean.  PJ is special to my family as he’s the first gay guy to invite my mom to his newly-legal wedding, but his home in Long Beach is in very rough shape.  Long Beach had a wash-over, where the ocean met the bay, and the city’s entire municipal system of water, sewage and utilities is shot.  Plus, the flooding prevented firefighters from combating a fire in the canal section and six homes burned to the ground.  Long Beach has a curfew in place, and the cops are only letting residents inside city limits during the day and Gawd-only-knows when life will return to this city by the sea, where my family used to go for a swim and afterwards get pastrami sandwiches at the Jewish deli.

My best friend from the old neighborhood is now a retired lifeguard from the New York State Park lifeguard service – the elite set of life guards on Long Island who patrolled Jones, Robert Moses and Sunken Meadows beaches, saving about 5,000 folks a year.  Richie had a mini stroke last winter and now can barely walk to the surf, let alone swim a mile in the ocean to pass his annual qualifications – but Richie’s now living in Hampton Bays and no one has heard how he fared.

Thanks for your many prayers, phone calls and good wishes.  To my kin Back East, we here all salute your survival, endurance, and tough mindedness.

These photographs come courtesy of Bruce Bishop of Staten Island.  Bruce is the son of a former NYC cop who grew up in Brooklyn and Bruce’s father was a life-long friend of my dad’s. 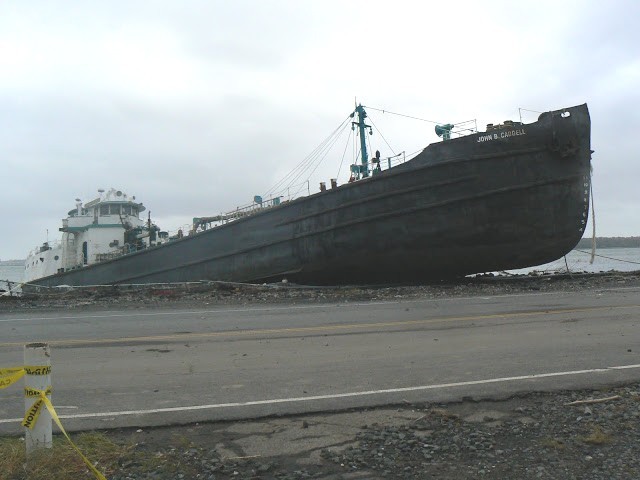 The 700-ton tanker, John C Caddell washed up on the western shore of Satten Island during Sandy. Bruce took the shot looking south, just below the Stapleton Home Port area of SI. 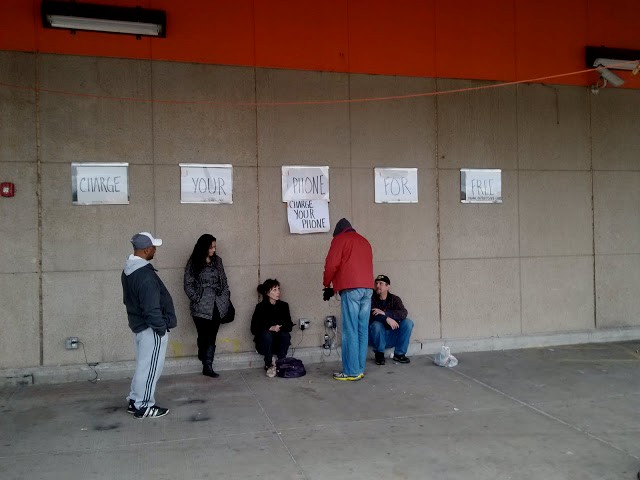 Recharging cell phones for free at a local Home Depot.

This entry was posted in Culture, Environment, Nature, Weather. Bookmark the permalink.