Concerns about the flight path abound in the DB Cooper case despite the 47-years since the iconic skyjacking occurred, and the closing the case in 2016 by the FBI due to a lack of any new information or suspects.

Nevertheless, citizen sleuths are carrying the torch, searching for the truth of America’s only unsolved skyjacking. The height of these inquiries deals with the location of DB Cooper’s plane when he jumped at 8:13 pm on November 24, 1971. Was it over Battleground, Washington as the FBI has long-professed? If so, why hasn’t anything ever been found in the FBI’s primary search area near Ariel and Amboy, Washington?

Further, why was $6,000 worth of Cooper’s ransom money discovered at Tina Bar, near Vancouver, WA, in 1980 – about 25 miles west of the FBI’s nominal flight path and landing zone?

As a result, the “FBI’s Flight Path,” long-touted as the Victor-23 air corridor flown by all aircraft heading south of Seattle when 10,000 feet in altitude as was Cooper’s 727 jetliner, is now being openly questioned by many investigators. Due to oscillations in the aircraft and a major “pressure bump” at 8:13 pm, it is believed that Cooper jumped out of his airplane at that time, but the big question remains: where was Flight 305 at 8:13 exactly?

To find an answer, researchers are striving to learn more about the high-tech SAGE radar system that tracked DB Cooper and his hijacked aircraft, Northwest Orient Flight 305, when it left Seattle and started flying to Mexico, as instructed by Cooper.

One Mountain News-WA reader who posts frequently at the DB Cooper threads, named “Flyjack,” has discovered a member of the 1971 SAGE team that was stationed at McChord Air Base in Tacoma, WA. Recently, Flyjack gave me the contact information for a David Morgan, and I spoke with Mr. Morgan today.

Morgan was indeed a SAGE operator stationed at McChord in November, 1971, but he was not on duty the night of the skyjacking. Nevertheless, we spoke at length about the technical capacities of the SAGE system and events surrounding the involvement of SAGE, McChord, and his 25th Air Defense Command based at McChord.

Morgan is a humble man, and warned me that some of his 47-year-old memories might be a little fuzzy. However, he confirmed that the SAGE system could only pick up a skydiver if chaff – tiny slivers of aluminum foil – was used to amplify the radar’s bounce-back signal. Since we know the chutes were delivered directly from civilian sources to NWO, it is highly likely that chaff was not used. As a result, the SAGE didn’t spot Cooper leaving his airplane.

Morgan also gave me an interesting military perspective on the Cooper skyjacking. He and many others at McChord were concerned that Cooper might use the airplane as a weapon and fly it into a military installation, or a nuclear reactor, such as the Hanford reactor and its supply of plutonium. He was quite passionate about this possibility, and acknowledged it presaged by thirty years the fears now borne by 9-11. In fact, he indicated that the primary purpose of the pursuit planes, the so-called “alert birds,” was to shoot down Cooper and his airplane if he strayed too close to a military installation, or gave indications that he might crash the aircraft into a critical civilian site.

Following that exchange, I shared with Morgan published reports that a Major Dan Dawson –  once he left the Air Force and was a WA State Legislator – had told a local Washington state journalist named Adele Ferguson that he was in charge of the DB Cooper search at McChord and commanding “alert birds” of the 318th Fighter Squadron, specifically F-106 interceptors, to shadow Flight 305. He also told Ferguson that he was also preparing parachutes for Cooper, and had been instructed by his NORAD command to not put chaff in the chutes.

Morgan and I talked at length about the vagaries of truth when power, money, and prestige are in play. He served tours in Vietnam and SE Asia, and has heard about MAC-V-SOG, the secret Special Forces units that fought outside of Vietnam and whose members feel strongly that DB Cooper was one of their guys.

As for SAGE radar, Morgan told me that it was a fine system, but inadequate – even for 1971. He said that the units Back East couldn’t handle the air traffic – commercial and military – on some days, and sort out the good guys from the baddies. “New York and northern Virginia just had too many aircraft,” he told me.  On the West Coast however, Morgan said they tracked all commercial and military aircraft with routine comprehensiveness.

He also described the SAGE system as being IBM’s first, and last, vacuum tube system for the military. The tubes created so much heat that they provided all the heat necessary for a three-story building, where one whole floor was dedicated to the SAGE processors.

What SAGE excelled at, according to Morgan, was sorting out radar signals in weak or overlapping areas where conventional signals were hard to correctly identity. SAGE was able to prioritize and deliver accurate data when other systems were unable. Morgan confirmed that SAGE could fly the F-106s to their targets, and also fire their weapons remotely. He also said that F-101s in Portland, F-102s in Boise, and Royal Canadian Air Force (RCAF) interceptors on Vancouver Island in British Columbia were all linked into the SAGE and the 25th Air Defense based at McChord.

Yes, this was a delightful conversation with Mr. Morgan, but many questions still remain unanswered. Such is the Hunt for DB Cooper. 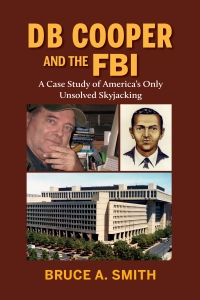